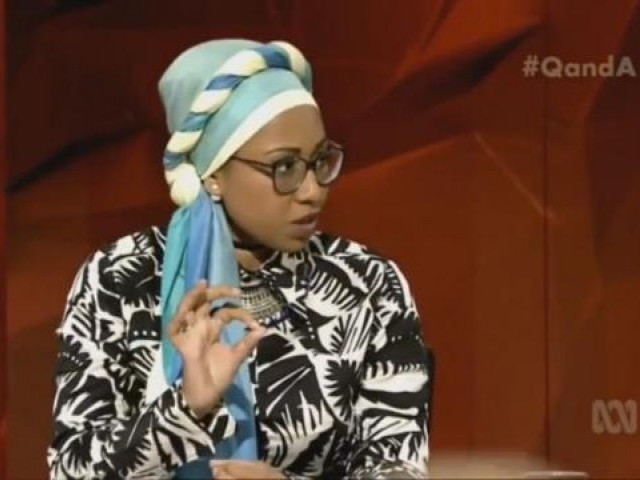 I’m a feminist, but I’m also a practicing Muslim and I have always believed feminism is not to be confused with Islam. PHOTO: SCREENSHOT.

I’ve been reading about Australian youth activist Yassmin Abdel-Magied (we appeared on an Australian show once together) and her words to Jacqui Lambie on an Australian Broadcasting Corporation (ABC) television show that Islam is (to her) the most feminist religion.

Yassmin got pilloried in the Australian press for this statement. With the state of affairs for women in many Muslim countries today, it’s easy to see how it might not sit well with a cynical and non-Muslim-friendly audience. It would have gone down great with an audience full of Muslims, but we should probably unpack the statement a little bit to come somewhere between the optimism of Yassmin’s assertion and the rest of Australia’s derision.

The statement that would have made more sense is,

“Islam embodies many of the principles that feminism fights for – equality, dignity and respect of women. At the time it came into existence, it was revolutionary for the rights that it gave to women, which had not been seen in any religion previously. However, patriarchy is the norm for the countries into which Islam took hold, and patriarchy has a way of corrupting everything in its path. What we see today is a massive distortion of what Islam was meant to be for women – and men.”

But let’s take this a little further.

I’m a feminist, but I’m also a practicing Muslim. And I have always believed that feminism is not to be confused with Islam. Feminism is the mechanism by which I fight for the rights that have been taken away from me by men in my country in the name of Islam. If Islam gave me the right to own property, patriarchy in Pakistan makes it difficult if not impossible for me to technically and legally administer and maintain my own property. If Islam gave me the right to go to school, patriarchy in Pakistan guarantees that girls in my country don’t have access to safe schools. “Islam” and “Sharia” then become shorthand for “patriarchy in Muslim countries”.

The way all religions work is through the engine of human conscience. Islam, like any other religion, is based on an honour system. No, I don’t mean the skewed South Asian/Middle Eastern system of izzat but the honour system of universities, where there was no proctor and you were trusted not to cheat because you wanted to be honest, not because you would be caught. It’s up to you to abide by the principles of a religion; Islam’s principle of just treatment and fairness for all regardless of race, gender, nationality or class is ignored by too many of its adherents. They think God is looking the other way when they mistreat women, that they won’t be caught, or that God even wants it this way because men have been made superior to women.

Your conscience is never more severely tested when you have been given stewardship of vulnerable people. Unfortunately, men have colluded in Muslim countries to keep women in a vulnerable position in order to strengthen their own sense of power. Feminism helps us to understand this power dynamic and work towards dismantling it.

Feminism is a powerful movement, but it has its limits. Islam doesn’t mandate the superiority of one sex over the other, but strives to achieve balance between the sexes. What “balance” looks like in Muslim countries is very different from what it looks like in European or American ones. This is down to a complex mix of society, culture and politics. Feminists in Muslim countries have different battles to fight than those in Western cultures. Perhaps that’s why Yassmin’s stance seems odd – she’s fighting a different battle in Australia than what Australians see us fighting against in, say Syria or Saudi Arabia. But Western countries shouldn’t fool themselves that women have already achieved equality or that racism and bigotry don’t exist in their countries.

I don’t like to make assertions that Islam is a feminist religion. I like to think of it as something even bigger than feminism – a system through which we humans achieve our full potential on earth as well as cultivating our relationship with our Creator. This is a struggle that applies to both men and women. How we run our affairs on earth can be influenced very positively by feminism. How we treat each other and look to the meaning of life beyond what is here in this physical and spatial plane is beyond feminism, and we need to remember that.