Muammar Qaddafi: The coolest dictator ever! 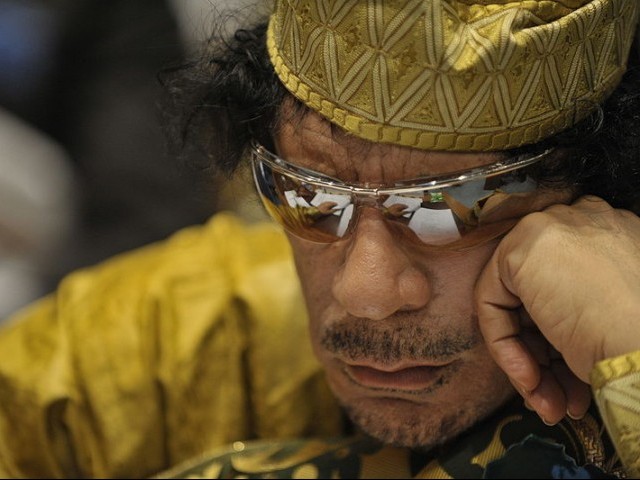 Libya has turned into a warzone, the global media, led by Al Jazeera has gone rabid against Muammar Qaddafi. Twitter and Facebook have erupted with Qaddafi hatred – but hold on, there are a whole bunch of reasons why Qaddafi is really a great guy.

1. His dress sense. Who can hate someone who defines his own style, and sticks with it year-after-year? I personally think any man who can carry off swathes of cloth wrapped around him with a messy unkempt I’m-a-70s-rocker hairdo deserves some credit, no?

2. Call me Pakistani, but I find dictators who usurp power and hold onto it with an iron fist, military might, dollops of nationalism with just a touch of sneaky underhandedness kind of sexy. I mean, who needs democracy anyway – it’s so 2001 (reference: this lovely local protest against democracy)!

3. Anyone who can p*** off millions of Facebook and Twitter users (who had never even heard his name a month ago) in the span of a few days, well, speaks for itself.

4. He has a stadium named after him for helping Pakistan with its nuclear program back when he was a totally hot anti-imperialism hero! Hello, has everyone forgotten that? Not to be a conspiracy theorist, but I’m not buying into how smoothly all these revolutions are taking place, with a more-than-cheerful United States waving their freedom banner yet again.

5. Qaddafi is willing to bomb his own citizens for something he truly loves and believes in. Ladies, this man’s a keeper.

7. How many dictators knows how to rock it out? When they aren’t indulging in war crimes the Qaddafi family enjoys spending millions of dollars on Mariah Carrey and Nelly Furtado concerts. Can such a patron of the arts really have it wrong? I think not.

8. You can never spell his name wrong. Gaddafi? Sure. Kattafi? Why not. Gadhafi? Knock yourself out. Alternatively, you could refer to him by his official title “Brotherly Guide of the First of September Great Revolution of the Socialist People’s Libyan Arab Jamahiriya” – now if that isn’t cool I don’t know what is. If that one’s a little long he bestowed another title upon himself “King of Kings of Africa.”

9. Qaddafi’s royal guard of 40 virgins is enough to give any young jihadi second-thoughts about a suicide mission. The dictator is living proof that you can achieve heaven on earth if you just try hard enough.

10. Consistency. The streets may be filled with protesters calling for him to step down but Qaddafi remains clearheaded and understanding. He knows that they are just confused and will come to their senses (once the pills wear off).

After all, Qaddafi knows the people really do love him.