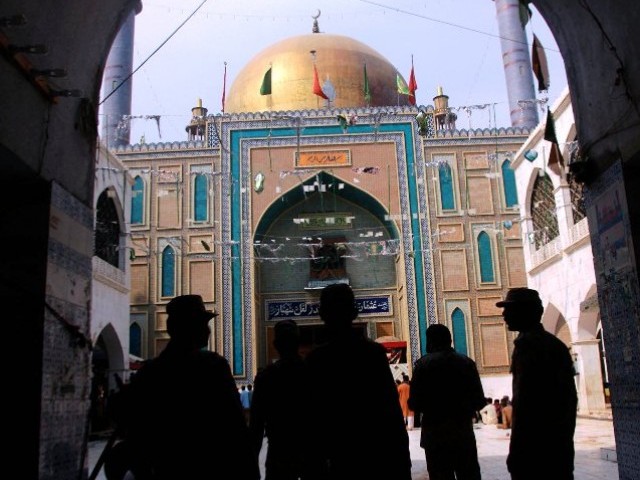 Three years ago, I had a dream; I dreamt of being at the shrine of Lal Shahbaz Qalander. While I am no clairvoyant, and my experience of going to mazaars and shrines has been close to non-existent, the dream was vivid and it was stirring. Whether it was symbolic of listening to ‘Ho Lal meri pat’ too many times, or seeing pictures of where Lal Shahbaz Qalander is buried, or something more, I do not know, but because I was curious and I had never been to this hub of folk-lore and Sufism I decided to finally go and see it.

At the end of a mid-afternoon journey from Karachi, as we approached the shrine, I remember seeing throngs of people surrounding the structure, countless little shops; selling colourful toys, trinkets and garlands of flowers to pay tribute to Lal Shahbaz Qalander, families clamouring to buy them to respectively gift their children, and to gift the great personality buried inside.

As we walked inside, what struck me most was not the tranquillity, or even the spirituality, but the feeling of being in a sanctuary. I remember less about the altar of the shrine, and more of the haven it provided for the downtrodden. There were beggars and madmen; the aged and the sick; women with their children; Hindus and Muslims. The people I saw there fascinated me because they were people society had forsaken.

Babies crawled on the marble floors, pawing at crushed rose petals; women sitting, intermittently crying and eating the fruit sold outside. There were homeless people, bearded and ragged, sleeping peacefully on the cool floor, safe from the scorching heat outside. I may not have had a ‘Eureka!’ moment as a result of my dream, but it gave me an insight as to why this shrine has withstood the test of time. It made sense that Lal Shahbaz Qalander, who converted countless people to Islam, and illuminated the message of peace, should provide with God’s Grace, a safe haven for all.

Last night, I saw Sehwan Sharif again, but not in a dream. I saw it on a TV screen, engulfed in terror; smothered in blood; littered with human bodies. And while my memories told me a different, sweeter story, the present is all too vivid, the recent images flashing before me, all too gory.

Where I recall the chubby, kohl-eyed babies playing with flowers, I see pictures of mutilated children lying in the crimson of blood, not roses. The heaps of shoes of murdered victims are souvenirs of prayers cut short; the wails of agony, taking the place of slogans of respect and homage. No, it was no sanctuary last night, it was a bloodbath.

I know not who did this, for there are, have been and most likely will always be enemies of Islam, of peace and of Pakistan. But this I don’t understand, because this symbolises man as an enemy of mankind. This shrine embodied humanity in its essence, regardless of cast, creed and religion, so it is baffling what extreme these extremists belong to, attacking a race they themselves hail from, a haven any could seek refuge in. However, the enemies are not only the extremists.

Little less than one hundred people are feared dead, so many of them children; so many might have survived had there been medical facilities closer than Hyderabad and Jamshoro. Sehwan Sharif, the ancestral constituency of the Chief Minister Murad Ali Shah, the custodian of our province, was forsaken by those who were duty-bound to protect it.

The people of Sehwan and travellers from near and far were cheated of their basic fight for survival, left bereft of any emergency care and protection when they needed it most. How then, can Murad Ali Shah, who could not give a decent hospital to his own constituency, give the rest of Sindh anything? What was he doing for his people, all these years as finance minister and then as the chief minister?

Corridors of hospitals in Hyderabad and Jamshoro are full of bloody bodies, packed like sardines, unable to withstand the two hour plus journey they could not survive.

Will a government that is at the best of times, only reactionary, learn that it is time to stop filling the coffers with gold and investing in preventive security measures and medical facilities? Are our only enemies the extremists and those charged with our safety and protection blameless? It is criminal how the very people who have voted for leaders to represent them, have been orphaned and left to die with no hospitals, no medical aid. Clearly, some lives matter more than others.

The fight is in our homes now, the war at our doorstep. No one, no matter how powerful is exempt. Perhaps this is not the time to play the blame game, but there need to be questions asked why we can never be safe. There needs to be validation for the lives lost and the bodies in pieces, value for the blood spilt and last breaths taken simply because the journey to survival was just too far away.

We are a nation of resilient people, the children of Sindh maybe more so than others. Undoubtedly, this too shall pass, but the cost has been heavy and we have paid it with our very lives. What this teaches us is imperative because we have been attacked by extremists, and by negligence and corruption, by our leaders. How many lives lost will satiate both?

I pray I have another dream, and it again takes me to the Sehwan Sharif I saw three years ago; where love for all God’s creation trumped everything else, and where again, those seeking refuge knew that mankind’s evil will not touch them, in the safety of the resting place of Lal Shahbaz Qalander, who left this world spreading the message of peace.

(O Lord, may you prevail every time, everywhere, I pray of your well-being, In the name of Ali, I pray to you to help my boat cross in safety (in the river of life)).