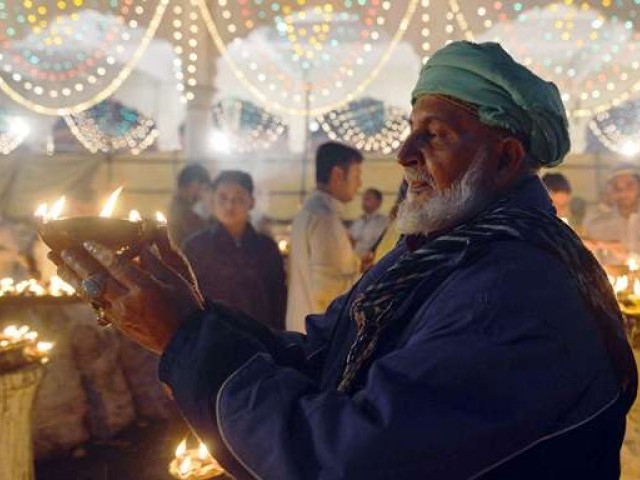 Unlike most dramatic beginnings, this one was a humble take-off. There were no signs that I was about to undertake the journey of my life. No early-morning itches, no accidents, no drums rolling and no divine calls. It was as if God wanted to take me by surprise.

Mama had to visit Sehwan for some office work and I tagged along, simply for the sake of obliging her and out of my own curiosity. After a road trip of three hours, we finally reached our destination. At first, I felt no magic in the domes, the mausoleum or the city with its array of labyrinthine ways, enigmatic beggars, and sellers of assorted, sacred knick-knacks. It was a regular, dusty town with no hint of the spiritual magic that was about to befall me.

The mausoleum itself was crowded to the brim. People had gathered – their eyes a thousand begging bowls; the lines of their faces etched into supplication; each mannerism entreating for a divine intervention. There were no distinctions here; no divisions, it was as if everyone was connected through their needs and desires. It was either a call for the beloved, for money or for setting domestic wrongs right.

It was a parallel world where eyes did the talking, one where the mundane became the extraordinary – infused as it was by a spiritual tinge.

I saw a boy, about 13 years of age, with misery and poverty written on his face, selling snacks and sweets. Unexpectedly, the streets broke out into commotion. An old lady was shouting that her belongings had been stolen and she had no money left to go back home as she spent it all on the pilgrimage to Sehwan. Everyone looked in desperation and yet everyone had something to offer. A comment, an expression of pity, a gesture of condolence.

And then stepped ahead, the beggar boy.

Vendor or provider? Supplicant or giver? Human or divine? Obvious or the sublime?

He handed over all his belongings to the lady and disappeared into the crowd before anyone could even register what had transpired.

I was surrounded by glistening eyes, heads bowed down, and a dhamaal kicking up nearby. There were drums beating in celebration of desire, hope, supplication and divinity. This was my encounter with God – God manifested its Being through a young seller, a young hope.

The dancers continued in frenzy, and the music reached a crescendo. My soul was enriched. I looked around the dusty town of Sehwan and I saw magic. I saw magic in the grubby streets, in the blue domes of the mausoleum, in the famished supplications, in the flag fluttering high, in every pebble that adorned the city – I saw it.

I saw the miracles abound.

The author is a digital marketer by profession with a weakness for the written word, fries, harry potter and tea.

Aangan Terrha: The theatre lover's fix of nostalgia and entertainment

Male feminist: The day I learnt the meaning of 'anti-climax'