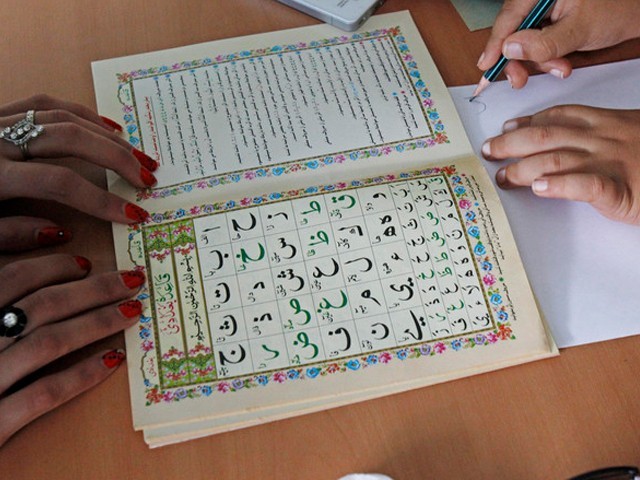 A bill introduced by PML-N MNA, Naeema Kishwar Khan, resulted in discussions about whether lack of Arabic teaching has caused increase in terrorism cases. PHOTO: REUTERS

I suppose it is reasonable to assume that the men and women in our National Assembly are mentally fit – people who think and act rationally. We elect them every five years, hoping that they will solve our problems and make us proud of being citizens of Pakistan. But then, one of them says something completely absurd which makes me want to bang my head against the nearest wall and regret not going abroad after I graduated (those were the days when it was very easy to get a US visa).

I am referring to a female member of the National Assembly who claimed that the increase in terrorism is directly related to our children learning English and not Arabic in schools.

A bill moved by the Pakistan Muslim League-Nawaz (PML-N) MNA, Naeema Kishwar Khan, resulted in discussions about whether the lack of Arabic teaching has caused an increase in terrorism cases. To further substantiate this notion, another PML-N MNA, Parveen Masood Bhatti, supported the bill, stating that terrorism was increasing because students were not studying Arabic. According to her,

“We have started focusing on the English language, and parents put their children in English-medium schools and do not bother teaching their children the Arabic language. It is because of this attitude that terrorism is increasing.”

I do not know whether the ladies think that not learning Arabic has caused a rise in terrorism cases or if learning English is responsible for it. I do think that our children need to learn to read, interpret and speak Arabic as it will prevent them from being brainwashed by virtually illiterate clerics and their interpretations, but it cannot be done for the simple reason that we don’t have enough teachers fluent in Arabic in the country, and the ones we could employ from abroad are most likely not fluent in Urdu. In fact, they would probably be able to teach only in English, which means that our children would first have to learn English before learning Arabic.

Furthermore, it is not as simple as it seems. If speaking Arabic really prevents terrorism, how do you explain the fact that 15 of the 19 terrorists who carried out the 9/11 attacks were Arabs and spoke Arabic fluently, not to mention that the al Qaeda founder, Osama Bin Laden was an Arab and spoke Arabic fluently as well. Moreover, there are only a few to zero terrorism cases in countries like Canada, Australia and New Zealand, where no one speaks Arabic and English is the preferred language by most people. Hence, speaking or teaching English does not cause terrorism. In fact, English has been the preferred medium of language in Pakistan since before its inception, and there was no terrorism until the 1990s.

As for Arabic, all madrassa students have to learn it, and some of the arrested terrorists reportedly belonged to such madrassas – madrassas where they would learn and understand Arabic, interpreted by clerics and their understanding of the Holy Quran.

Hence, it is safe to conclude that speaking and learning Arabic, as taught in many madrassas, is where the problem arises. Since they lack translation and interpretation skills, the students believe whatever they are being taught and are brainwashed to believe that they are serving a higher purpose.

Did it ever occur to the ladies to do some research and find out which is the preferred and common language for suicide bombers and terrorists? Is it English? Yes, they do understand and speak English, but have they ever heard any suicide bomber screaming “God is great” instead of “Allahu Akbar” before blowing themselves up?

So, think again, ladies, it is not language that causes men, women and children to indulge in terrorism, but the environment in which they have been raised. Furthermore, I have a suggestion for you, honourable ladies: why don’t you start learning and speaking in Arabic? You will soon find out if it can prevent you from terrorising those whom you come in contact with every day.