Russia will never sabotage its alliance with Iran for Donald Trump 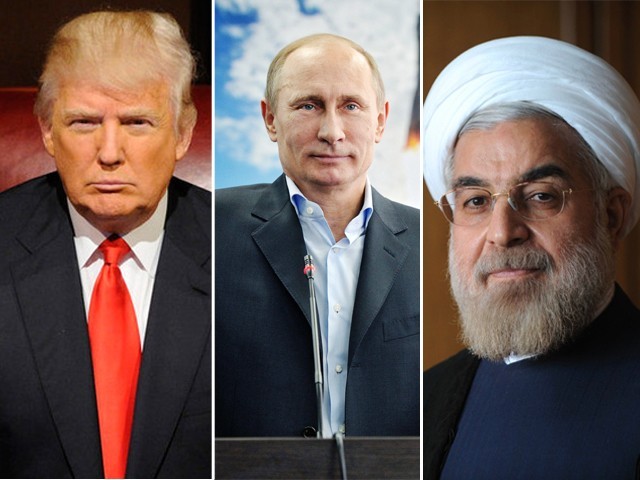 Donald Trump’s obsession with Vladimir Putin has irked not just the US intelligence community but also our allies.

As I write these lines, Washington is abuzz with the news of Donald Trump’s top security advisor, Michael Flynn’s resignation. The White House is trying to clean up the mess Flynn’s rather over-zealously erratic act created, ending up in critics looking at the election victory in a whole new light.

Ironically, Trump saw in Flynn the capability to penetrate the Russian iron curtain by virtue of his connections with Moscow. Ironically also, it was Flynn who had put Iran on an unexplained and unelaborated ‘notice’ early February – an ill-conceived, rhetoric ridden, flash in the pan type of a half-step that really just reiterated Washington’s unsavoury relationship with Tehran.

In a world of deceit and absurdity, Trump may be the master of it all, but in the realm of international relations, he’s no Albert Einstein. He played with the fantasies of poorly educated Americans during his election campaign, aroused their passions, awoke sleeping demons and eventually managed to win the presidential election.

While he lucked out domestically, Trump’s dreams of reorganising and reconfiguring US foreign policy interests and strategic alignments may never see the light of the day. Tweaking the North American Free Trade Agreement (NAFTA), renegotiating NATO, denying climate change, pulling out from the Trans-Pacific Partnership (TPP) trade deal and building a real wall along the Mexico-US border may bring together a few thousand howling folks at an election rally and win him votes, but from the prism of realism, these are just non-starters, to say the least.

Amongst a thousand things on Trump’s laundry list to change the course of world affairs is his delusion of driving a wedge between Iran and Russia in order to get Moscow on his side. Whatever the truth may be, Trump’s obsession with Vladimir Putin has irked not just the US intelligence community but also our allies. However, Trump has persisted and insisted that he wants to work it out with Russia and improve relations. Divide and rule is what he wants. Poison Putin against Tehran, forge an alliance with him, and go after Iran to (a) prove that the US and Russia can work together to defeat ISIS, and (b) appease the Iran sceptics – right-wing and Benjamin Netanyahu included – by declaring an all-out confrontation with Tehran.

At the expense of sounding derogatory towards Trump’s or take wind out of Secretary Rex Tillerson’s sails, the US realistically doesn’t stand a chance to cosy in with Russia or break the Moscow-Tehran alliance. The reasons are simple:

– Russia and Tehran have a history of cordial relations. They are age-old allies.

– Despite a push for closer Moscow-Washington relations, elements within the US power structure will not allow Trump to let the guard down. It’s a nightmare scenario for them. – Moscow needs Iran. Syria, a crucible of Russia-Iran cooperation, has brought these two countries closer than ever before.

– Moscow and Washington don’t agree on much. Similarly, Russia disagrees with the US assessment of Iran. Moscow sees Iran from a ‘different lens’ altogether.

– Putin needs the Ayatollahs to fulfil his strategic goals in the Middle East. The Syrian conflict is pretty much Russia’s war now. Iran has even allowed Russia to use it military bases to launch operations in Syria – an unprecedented step.

Trump’s brand of bad-ass, belligerent diplomacy, unlike some of his executive-order ridden measures, is a non-starter. With the Flynn episode looming large on the horizon that would perhaps lead to a deeper scrutiny of Trump’s Russia connection, it’ll be prudent if he backs off and holds his horses as far as meddling with Russia and Iran is concerned.

Trump’s so-called comradely with Putin isn’t real. The Flynn crisis and the Ukraine problem will test Trump diplomatic skills. What’s real is Putin tinkering with US global interests, masterminding an unprecedented US policy debacle and bringing back the good old glory of the Soviet days.

What must not be forgotten is that Putin, a former KGB boss, is a perpetual schemer. He plays his cards close to his chest. The Cold War may have ended but the diehard Politburo mentality is still alive and kicking. Putin is already showing his teeth. He’s an opportunist and he sees Trump as a soft target. There was, after all, a reason for ‘installing’ a weak individual in the Oval Office.

As for Iran, their leadership takes no nonsense. Decades of sanctions and years of isolation have only made that nation smarter and more resilient. The way they negotiated the nuclear deal is a testimony of their vision and farsightedness. Things are looking up now.

Trump can’t do much against Iran and the Iranians are aware of that. For one, he doesn’t have room to manoeuvre around the treaty – it’s an international pact and the US is only one of the signers. Secondly, Tehran is fulfilling all the requirements of the treaty. Most importantly, Iran has an international standing, credibility and friends in the right places to ensure that Trump’s little plan won’t work.

Trump has a lot to learn in terms of everything to do with the government. He might get by his arm twisting and bullying the general populace of the US but in terms of foreign relations, it’ll be a rough ride. Implementing those impulsive campaign ideas will be a near impossible adventure. He can jump off the click but can’t succeed.

Luckily, there are some good men still around along with institutions and a robust checks and balance system in place to keep Trump’s hot-headedness at bay. Additionally, he must, first of all, sort out the ‘unbelievable turmoil’ in his own backyard before venturing to pry into other’s affairs and respond to the long list questions that the world has about his credibility. He can’t keep deflecting or acting ignorant forever.