Is FC Barcelona out of this year’s Champions League? 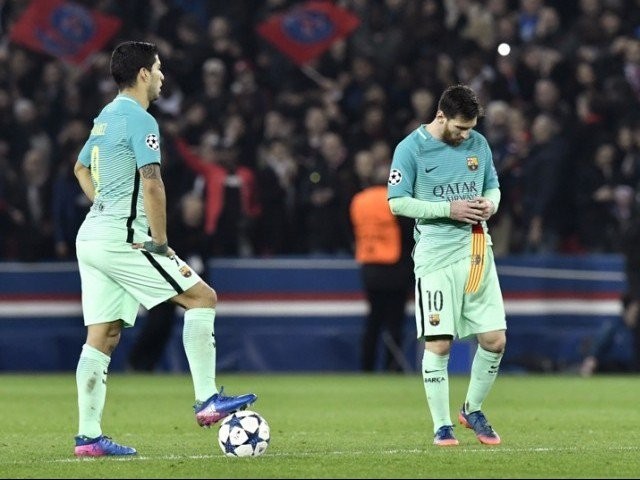 February 14, 2017, will be a lasting memory in the mind of every Paris Saint Germain (PSG) fan for years to come. In a historic night at the Parc des Princes in Paris, PSG completely blew away Spanish giants FC Barcelona and more or less confirmed their place in the quarter-final of the UEFA Champions League (UCL) 2016-17.

Although the odds were stacked against Unai Emery’s PSG, the France Ligue 1 champions for once, showed that they are a force to reckon with and cannot be taken for granted. Before this match, Emery’s track record against Barcelona, involved 23 attempts with one solitary win, but this time around Emery had the last laugh.

Since 2013, Barcelona had beat PSG twice in the knockout stages of the UEFA Champions League but this time, a determined effort from the French side ensured that their fans did not have to go through heartbreak once again.

Right from the outset, the home side was clearly the dominating force and kept the Catalans on the back foot. PSG’s supremacy in the game was evident from the fact that Barcelona players were stuck inside their own half for majority of the game and were just not allowed to dictate terms like they usually do.

Angel Di Maria and Edinson Cavani, the birthday boys, had a night to remember as they shined in PSG’s four star performance.

Former Real Madrid player, Angel Di Maria opened the scoring for PSG with a smashing free kick, perfectly placed in the top right corner, in the 18th minute of the match. To further supplement Barcelona’s troubles, Julian Draxler notched up his side’s second goal, capitalising on a mistake by Leo Messi, in the 41st minute. Draxler has now scored in debut matches of all three competitions he has played for his new side PSG.

Di Maria inflicted more torment on Barcelona when he curled a splendid effort past Ter Stegan, in the second half, to put PSG firmly in control of the tie. In the 72nd minute Cavani scored his first and his side’s fourth goal with a clinical finish to almost put this tie out of Barcelona’s reach and left them with a mountain to climb at Camp Nou in the return leg.

This defeat was the joint-heaviest for FC Barcelona in European Competitions in the club’s 118-year-old history.

Uncharacteristically, the Spanish side had an extremely poor outing and struggled to shape anything substantial during the whole match. The defence was clearly dreadful, the midfield lacked creativity and the most surprising element during the match was that Barcelona had just one shot on target which is an extremely rare sight in the presence of star players Messi, Suarez and Neymar.

PSG also became the second team to keep FC Barcelona from scoring this season, after Malaga in 2016.

Throughout the match PSG commanded the midfield, courtesy of a superb show from Marco Verratti and Angel Di Maria. The team was equally good while going forward as they created numerous chances and tested Barcelona’s weak defences which were just not up to mark and came second best on most occasions. The defence was impressive as well which can be judged from the fact that the renowned trio of Messi, Suarez and Neymar failed to land even one shot on target during the entire match.

It would be unfair not to mention the performance of Thomas Meunier and Adrien Rabiot who kept the visitors at bay during the match with a solid show.

Luis Enrique is now under considerate amount of pressure to turn the season around for Barcelona, who is already falling behind in the La Liga race behind Real Madrid. Only a miracle will keep Barcelona in UCL because history is not on their side. No team has ever turned a 4-0 first leg deficit in UEFA Champions League history to date. Enrique’s stay at Barcelona could well be nearing its end unless he can somehow win La Liga which, at this point, seems unlikely.

FC Barcelona is virtually out of this year’s Champions League unless until they bring out a magical performance at the Camp Nou in the second leg and turn this tie around.