Will the real liberal please stand up? 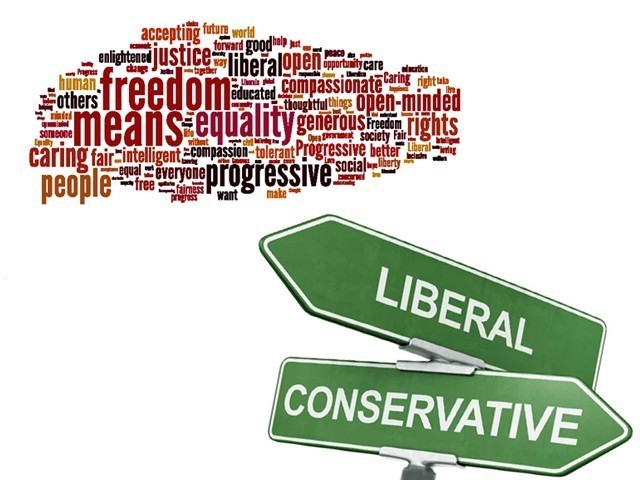 The irony of ironies is that the very things liberalism stands against – being judgmental, being inflexible and being rigid – are the very traps we see liberals falling into.

The recently held Karachi Literature Festival 2017 was a hub alright. But a hub of what? What it stands for, ideally, is not just celebrating books and authors, but also to serve as a hub for Pakistan’s beautiful minds that allow critical thinking and are truly progressive. Literature and the arts, on such forums, are designed to allow an open inflow and outflow of thoughts and ideas, and an exchange of not just narrative but also counter narrative.

One counterfoil session of the KLF 2017 was introduced as a discussion on conflict-resolution through art and enterprise. One of Pakistan’s well known musicians dared to play a short video as a tribute to the late Pakistani pop icon-turned-evangelist Junaid Jamshed, and went on to talk about how he and Junaid, despite ideological differences, managed to remain lifelong friends, and worked in collaboration on projects pertaining to peace-building. The reaction of a renowned “liberal and progressive” scholar on the panel was perhaps not unexpected but certainly unwarranted. He ridiculed Junaid Jamshed’s long beard and dressing style, and then went on to comment on his alleged misogyny. The comments were not just out of context. They were a giveaway of something that we don’t talk about often enough, which is that when it comes to “liberalism”, Pakistanis seem to have lost the plot.

Most dictionaries define a “liberal” in words as these: Someone who is open to new behaviour or opinions and willing to discard traditional values; lacking moral restraint; tolerant to change; a moderate person or viewpoint that favours a society or social code less restrictive than the current one, and welcomes constructive change in approaches to solving economic, social, and other problems.

The irony of ironies is that the very things liberalism stands against – being judgmental, being inflexible and being rigid – are the very traps we see liberals falling into. Liberal thought is, in essence, the anti-thesis of extremism and fundamentalism. It is the willingness to burst bubbles, push boundaries, and think out of boxes. True liberalism is having the heart to listen open-mindedly to an opposing view point, even though you may disagree vehemently.

Pakistan, today, is in desperate need of truly liberal people who may have their own set of beliefs, yet are willing to hear the other side out, and engage in dialogue. The intelligentsia, as it consists of more evolved people, has on it the responsibility of building bridges. Instead, what we are seeing on both sides is deep intolerance. The religious are seen indulging in feel-good extremism, and write off those who don’t follow religion in exactly the way they interpret it. For that, they get the flack which is perhaps justified. But it is less painful because the right-wingers never really claim to be open-minded. It hits worse when those who claim to be progressive and liberal follow the same patterns. Ironically, many of them, if not all, end up being equally intolerant of dissenting viewpoints, if not more.

Puritanical thinking makes one feel holier-than-thou (and this holds true for both the left and the right, for both the religious and the secular), plugs our ears to voices of those we see as “the others”, and perpetuates a binary world view, leading to the “it is either my way or the high way” attitude.

For cases in point, one should skim through social media websites. The easiest and laziest thing to do is put blanket generalisations on groups of people – something we are becoming very good at. Common assumptions are that a bearded man or a hijabi woman cannot be a human rights activist, a peace-builder or one raising their voice against domestic violence. Equally common are counterpart assumptions that a woman donning a sleeveless shirt or a man who is in the music or showbiz industry lack in faith.

Sneering at the opposite camps might get one some additional readers and followers, or a few guffaws from a chisel-headed audience that wants to enjoy the comfort of collaborative mockery. But what many of our brightest minds end up looking like is eternal teenagers and wandering Peter Pans who imagine the world as a virtual university town where everyone must conform to thinking in a certain way.

This is not to undermine the contributions KLF and similar forums are making. It is just that by default, events that act as magnets to the urban elite seem less welcoming to those who differ socially or ideologically.

We are all living in our ideological silos, comfortable in our respective bubbles with our own sets of designated cheerleaders. No one wants to try understanding another point of view. We sing praises of a word called “empathy” when we have not even arrived at the station of “tolerance”. We spare neither the living, nor the dead. And through it all, we see ourselves as the problem-solvers when we, ourselves, are part of the problem of polarisation. How, then, can any of us claim to be liberal?

If Pakistan truly wants to get rid of extremism, there will have to be more open-minded listening, especially listening to those who are not on the same page as you, without jesting about or being dismissive of the other point of view.