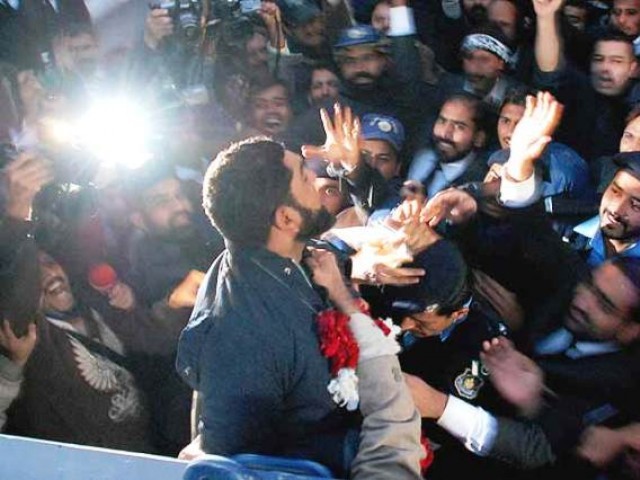 There are numerous charges that can be leveled against th clerics.

The problem with mousetraps is, one needs to pre-plan efficient mouse disposal.Less than two weeks after Mumtaz Qadri murdered Punjab governor Salmaan Taseer, the two clerics Qadri said had ‘inspired’ him with their sermons, strolled out of the Rawalpindi Anti Terrorism Court on bail.

Since their names hadn’t been mentioned in the Taseer FIR, the lawyer argued, there was no justification for debarring Mufti Hanif Qureshi and Qari Ishtiaq Shah from their… err, day jobs.

This time, however, the laws are not at fault. With the Anti Terrorism Act, lawmakers erred on the side of paranoia, rather than just caution. Terrorism, for example, covers not just suicide bombings and target killings but also hate speeches. And as the law stands, one who “instigates” an act of terrorism is as much a “terrorist” as the one who commits the act – which, strictly construed, would put Qureshi and Shah in the same boat as Qadri.

Interestingly, the list of terrorist activities also includes extortion, the disruption of communications networks or public utility services as well as the coercion of public servants. Printing, publishing and disseminating hate literature count as offences but also the “projection” of convicted terrorists, terrorist organisations and even groups suspected of being terrorists. Oh, and the calling of strikes and shutdowns through the use of threats or force?

The law also provides for government-compiled lists of banned organisations and other groups the government believes are involved in terrorist activities. (The lists are supposed to be periodically updated by a committee.)

Interestingly, the criminal law staple – presumption of innocence – is discarded here: any group that finds its name on the list needs to convince the government otherwise or the name stays. Soliciting funds or recruitment drives for banned organisations are obviously offences.

Since law and order is a provincial subject, primary responsibility for enforcement lies with the police but the armed forces and the paramilitary can be called in to help. And here, the law authorises the use of as much force as may be “necessary” besides the ceding of powers to arrest and search premises without warrants.

Meanwhile, not only do the Anti Terrorism Courts (ATCs) have the power to take cognizance of cases on private complaints or even their own “suspicions”, professionals such as bankers, doctors and realtors must also report clients and activities that could be linked to terrorism. And failure to do so could see the said professional having to defend themselves against terrorism charges. (Think ‘whistleblowers’, as defined by the US PATRIOT Act.)

But, caution lawyers and investigators, slick laws work in tandem with slick investigators, prosecutors and judges, not in isolation. And on these counts, the Pakistani criminal justice system is more Dabangg than CSI.

The situation has many worried.A Karachi based analyst says:

“The approval of Qureshi and Shah’s bail applications shows the extent of the Pakistani establishment’s myopia regarding militancy and the fact that convicting terrorists is still not a priority for the state. It also shows up Pakistan’s counter-terrorism ‘project’ for the testosterone-fuelled competition it’s become – the turf wars among the agencies; their insatiable lust for bigger, better toys and the competitive listing of ‘sacrifices’.”

Without an all-out effort to convict terrorists and a focused reform of the criminal justice system to that end, she says, the fight against militancy becomes meaningless. “If you can’t even adequately deal with the ones you had arrested, why arrest more? All you’re really doing is encouraging the boys to rack up the notches in competition with each other.”

A freelance journalist based in Islamabad.