Will Najam Sethi be able to apply his “zero tolerance towards corruption” policy in the PSL? 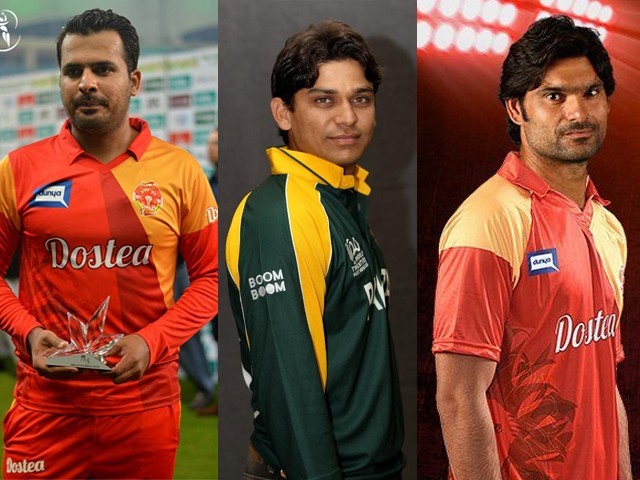 The Islamabad United Trio is reported to have taken a handsome amount for playing and bowling dot balls.

The second edition of the Pakistan Super League (PSL) is already off to a magnificent start with all the five franchises having played their inaugural matches. The first two days in the UAE have already promised loads of exciting tussles in the days to come. Destructive clean hitting, innovative captaincy, intelligent bowling, nail biting finishes and the birth of raw talent is what this league is all about.

But with lots of excitement, flair and promise, drama is bound to follow. On just the second day of the PSL, in an attempt to make the league completely scandal and corruption free, three players have been told to pack their bags and take the first flight home after having been investigated thoroughly by the concerned authorities.

Destructive opener Sharjeel Khan and middle order batsman Khalid Latif have been suspended by the Pakistan Cricket Board (PCB) while ace pacer Mohammad Irfan is under investigation for his involvement in the corruption scandal. The Islamabad United Trio is reported to have taken a handsome amount for playing and bowling dot balls.

1/3: PCB ACU has questioned M Irfan. Inquiry will continue. He does not face any immediate suspension.

Whether the allegations are true or not clearly remain to be seen, but what is most impressive about this whole scenario is that the PCB, particularly league Chairman, Najam Sethi, is taking absolutely no risks when it comes to tainting PSL’s image. Sethi, in a statement issued by the PCB, said that the investigation is a clear example of the board’s commitment to drive corruption out of the sport. Unlike the Indian Premier League (IPL), the Pakistani officials are not going to wait for the league to end in order to take action and instead have clearly shown the door to all the alleged crooks that are ready to go all guns blazing to taint it.

However, the question here that arises here is, why now? Couldn’t they have waited for the league to end? Wouldn’t this damage the image of Pakistan? Whilst these questions, raised by the general public, are genuine in their own sense, the answer is clear and concise – “zero tolerance towards corruption”.

For a state like Pakistan, that has already suffered more than any other team in terms of match-fixing in the last decade, this is a step in the right direction. A team like India or say England could have ignored the allegations, waited for the league to finish and then deal with the players later, but for Pakistan, it’s a totally different ball game. To make sure PCB’s message is understood, Sethi passed a clear cut statement regarding the on-going scandal:

“The PSL belongs to the people of Pakistan. We have to protect it from corrupt practices that ruin the game. We knew beforehand that some of these corrupt people would try to approach us. And we informed each and every player about these things. If even after that some players thought they could get involved then we want to send a message.”

What the mind is simply unable to process is the fact that after having been paid tons of money to play in the league, having been given multiple perks and an opportunity to represent themselves, and gain unprecedented fame, why are some of the players still being lured into committing such heinous crimes that could result in their careers being all but over?

For a bloke like Khalid Latif, the PSL was the perfect platform to really kick start his career and make a name for himself. As for both Sharjeel Khan and Mohammad Irfan, the PSL would have been their golden ticket to cement their position in the national team. However, if the allegations are true, the duo’s set career could be over just like that. All the hours of practice, the time in the gym, the travelling and the fatigue would turn to dust. Not only that, but unfortunately, they will have to carry the unsporting tag of corruption for the rest of their lives.

However, the scandal does not end here. According to a source privy to the on-going investigation, there are still two to three more players from different franchises that could also be suspended in the days to come.

2/3: PCB ACU has questioned S Hassan and Z Babar. They will continue to play @thePSLt20 .

Whatever happens in the coming days remains to be seen but what has developed thus far will surely have both negative and positive externalities. PCB, however, has done the right thing, and should be applauded for their ‘zero tolerance’ policy towards corruption in sports.

3/3: PCB ACU will remain vigilant and continue to protect @thePSLt20 from the menace of corruption.

Here’s hoping that the next few days will bring good news for the people of Pakistan and cricket in general. Hopefully, a cricket crazy fan like myself will be able to enjoy the action on the field and not get distracted by the happenings off the field. Till then, kudos to the board and well done Najam Sethi!