Definitely not a Mast Qalandar start to Lahore’s PSL season 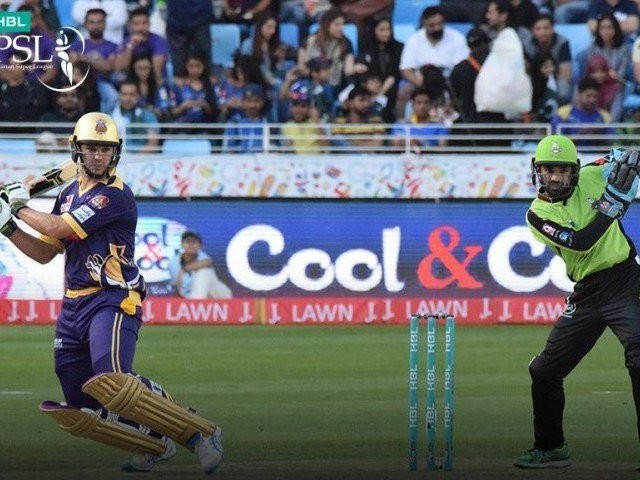 It was disappointing to see the way the Lahore Qalandars went about chasing down this total. PHOTO: PSL

If you are a Lahore Qalandar fan, the defeat at the hands of Quetta Gladiators will be a tough pill to swallow simply due to the fact that the Qalandars were the dominating force for the majority of the match.

Having won the toss on a sunny afternoon in Dubai, Brendon McCullum could not have asked for a better start from his bowlers as the Gladiators were reeling, at one stage, on 83 for six. Had it not been for Rilee Rossouw, who amassed 60 off 47 balls, the Gladiators would have been in all sorts of trouble and would not have posted a fighting total of 136 on the board.

The brightest spot in the first innings for Lahore Qalandars was the bowling of young pacer Mohammad Irfan, who picked up three crucial wickets including the big scalp of Kevin Pietersen. Irfan, who is young and inexperienced, impressed one and all with his tidy bowling with the new ball and also towards the end of the innings.

Chasing a modest target of 137, the Qalandars were well placed at 49/1 inside five overs and looked on course to chase down this total with time to spare. But with the fall of skipper McCullum, things went downhill for Lahore as wickets fell in a heap. Lahore needed someone from their middle order to steady the ship at that moment but most of the batsmen gave away their wickets in a soft manner rather than putting a price over their wicket.

Although Grant Elliott and Sunil Narine formed a pretty decent partnership of 40 runs in quick time for the seventh wicket and got their side close to the total, but as soon as the Kiwi player Elliott went back in the hut, the rest of the side could not resist for long and were bundled out inside 20 overs and eight runs short of their target.

The spinners of Quetta Gladiators were on the top of the game, utilising the conditions really well, as they picked up six wickets in total with Zulfiqar Babar, Mohammad Nawaz and Hasan Khan picking up two wickets each. The Qalandars clearly found it difficult to accumulate runs against them and had no answer to their accurate bowling.

The Lahore Qalandars should not be too stressed out even though they did not end up on the right side of the result in their first outing because they ticked most of the boxes overall. They had a near perfect first innings as they did most of things right but it was there batting which let them down and resulted in defeat.

McCullum’s captaincy clearly had its impact as he used the resources at his disposal in an adequate manner, especially the way he rotated his bowlers. The team clearly lacked the services of a seasoned captain last year but this year the difference is already being felt.

We are proud to announce our Captain and Mentor for PSL 2 will be Brendon Mccullum. We welcome him to the #QalandarsClan#DamaDamMast pic.twitter.com/6fN6YI2oto

It was disappointing to see the way the Lahore Qalandars went about chasing down this total. It was evident that there was lack of planning and reckless batting to supplement that. Although the target was a small one, that does not negate the fact that you still need a couple of good partnerships to chase it down successfully. Partnership is the key to winning matches and the Qalandars should work on this sooner rather than later.

Umar Akmal’s batting is of pivotal importance to his side and it is important that the right-handed batsman realises this and performs in accordance with his potential. The way he threw his wicket away, without scoring even a single run, was not a pleasant sight and is something the fans and his teammates would not want to see again.

The reigning champions, Islamabad United, who won their first match against Peshawar Zalmi, will be Lahore’s next opponent. The Qalandars will be hoping that they can put this defeat behind them and pass their next test with flying colours.