Is Rumi an anti-dote for the post-truth America? 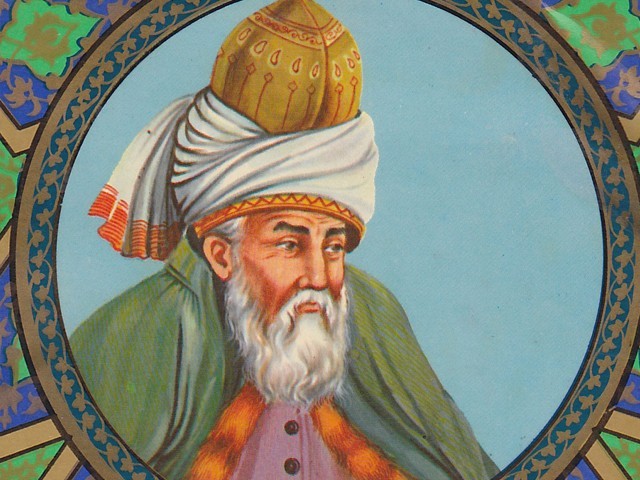 In the post-truth culture that has apparently ceased the present times coupled with the vicious anti-Muslim discourse that permeates many western and non-western societies, Rumi has assumed a new meaning. PHOTO: PINTEREST.

On January 5, 2017, the New Yorker published an article with a revealing title: “The Erasure of Islam from the Poetry of Rumi.” Rozina Ali—who is also the editorial staff of the magazine—raised an interesting issue: that in the West, Rumi, the 13th-century poet and scholar, is “typically referred to as a mystic, a saint, an enlightened man” but “less frequently described as a Muslim.”

Ali’s contention is that Rumi’s poetry has been decoupled by his English translators from its Islamic context, and that way they have effaced “historical dynamism” within the Muslim scholarship. Because “Rumi’s works reflected a broader push and pull between religious spirituality and institutionalised faith” in the Islamic civilisation.

Ali quotes Omid Safi, a professor of Islamic studies at Duke University, who believes that reading Rumi without the Holy Quran is akin to reading Milton without the Bible; and, while one can appreciate Rumi’s heterodoxy but at the same time that heterodoxy has to be contextualised within the Islamic history. And such contextualisation allows readers to appreciate that the Islamic culture in the thirteenth century “had room for such heterodoxy”. And, that an Islamic scholar of Sharia could also write widely read poetry of love.

Ali’s article has its own context. In the post-truth culture that has apparently ceased the present times coupled with the vicious anti-Muslim discourse that permeates many western and non-western societies, Rumi has assumed a new meaning: a symbol of Muslim contribution to civilisation. What Ali implies is that Rumi can serve as a potent example to counter those—she, for example, cites the US national security advisor General Michael Flynn—who seems ill-disposed towards Islam or tends to believe that non-western people have no contribution to civilisation.

So, paradoxically, Rumi should be depoliticised—since the Muslim context of his poetry was apparently effaced by the Victorian period translators on purpose—to be used as a political symbol in the Trump era. In effect, Ali’s article has two concerns: translation and Islamophobia. The first issue is essentially of an academic nature and the second one is clearly political.

While Coleman Barks is credited with popularising Rumi in the US— “morphing Rumi into American verse”—but he is also blamed for minimising the Islamic references in Rumi’s poetry and thus effacing its cultural context. And some others have resorted to what Professor Safi calls as a kind of “spiritual colonialism,” like Deepak Chopra and Daniel Ladinsky, who market and sell their unique interpretive works as Rumi books.

By not remaining faithful to the original, what is lost—in such translations—is the culture, tradition, and memory which a work of art carries within it. Thus, Ali cautions that,

“As conduits between two cultures, translators take on an inherently political project.”

But when we talk about the correct reading or the correct translation, the concept of authority of text comes to the fore and on that Roland Barthes (1967) argues that text has an independent existence of its own, and it is language and not the author which speaks. The culture and personality of an author should be discarded when interpreting a text, because the text is inherently multivalent and there is no one universal meaning in its language.

On a somewhat more mystical plane, Walter Benjamin in his famous essay The Task of the Translator (1926) says that,

“In translation the original rises into a higher and purer linguistic air…” or translation makes visible “the predestined, hitherto inaccessible realm of reconciliation and fulfilment of languages.”

Thus, from the Benjamin’s perspective, even if Islamic references are minimised in Rumi’s poetry, the translation still captures or transmits the elemental mystery which does not necessarily come from the subject matter.

While Ali’s emphasis on the faithful translation of Rumi’s poetry—which means incorporating Islamic context—may not preclude its secular reading, but such contextualisation can enable or enhance what Benjamin calls its cult value. And from the vantage point of the cult value, it is the existence of Rumi’s Masnavi (“The Quran in Persian Language”) that matters rather than its literary value. But the traditional aesthetics of “eternal value and mystery,” Benjamin cautions us, are susceptible to appropriation by fascistic and bourgeoisie ideologies.

This aspect still seems less of Ali’s concern than the politics of translation and its expediency in the current environment of pervasive Islamophobia. This takes us to the key question: whether the Islamic context of Rumi would make a difference to anti-Muslim views? And I am a bit sceptical about that.

Because even though Ali’s idea might not be completely beyond the pale, the issue is not as simple as it may seem. The first thing that we need to understand is that Islamophobia is well-entrenched in the West’s psyche, the reasons for which goes far back to its Orientalist tradition which viewed Islam with some degree of suspicion.

As Edward Said brilliantly explained in his book Orientalism (1978), the certain negative representation of the oriental people (including Muslims) and their cultures served to justify colonial imperialism and to build a positive self-image of Europeans as enlightened and cultured. In the present times, such negative representations of Muslims have a market (it is more exciting and sellable for corporate media) and geopolitical utility (to make militaristic Middle East policies more palatable to the public). Anti-Muslim views persist, because the media and academia plays a big role in it.

The 1988 and 1996 survey studies demonstrate that negative perceptions regarding Muslims were quite prevalent even before 9/11. That event alone just pushed open the floodgates of anti-Muslim views and gave authors like Roger Scruton (2002) and Bernard Lewis (2002) a free hand to write their Islamophobic treatises. The pre-9/11 Muslim bias in the US was also revealed by Wiki Leaks in 2013, releasing classified documents about Nixon administration’s 1972 “Operation Boulder” that targeted Arab Muslims.

In other words, the orientalist tradition in the West has never gone completely. As an illustration of this, we can read Sir John Keegan’s words in The Telegraph (October 8, 2001), in response to the invasion of Afghanistan:

“This war belongs within the much larger spectrum of a far older conflict between settled, creative, productive Westerners and predatory, destructive Orientals.”

Donald Trump, Alt-right, Golden Dawn or Marine Le Pen represent a movement which is informed by nativism. This movement exploits perceived and real fears to create (or preserve?) a discourse which tries to sustain the cultural demarcations through which self-identity of being European (white) is maintained. Preserving cultural segregation makes not only “othering” possible but is essential for internal cohesion and a superior self-image. But it is also important to remember that not Muslims alone are perceived as “other”. Blacks and Hispanics too are. In the past, Japanese, Chinese, and even Irish Catholics were also despised.

So the question is, would it matter to such nativist movements whether the “other” is cosmopolitan or not? Whether Rumi’s poetry was influenced by Islam? Or whether Muslims of the US inherent Rumi? For such a movement, the other is simply “the other” because they are different; they don’t share the same values. And hence they don’t belong.

If we look at how Nazis excluded the Jews, it becomes clear that the latter’s cultural heritage and cosmopolitan disposition hardly came in their aid. Though some Jews were let off on the consideration of being “prominent Jews” (for example, war veterans). Yet, in the words of historian Louis de Jong it “was a general practice to allow certain exceptions in order to be able to maintain the general rule all the more easily.” And ironically, Nazis had built anti-Jewish museums and libraries about which Hannah Arendt says in her book Eichmann in Jerusalem (1963):

“We owe to this strange craze the preservation of many great cultural treasures of European Jewry.”

So when the Nazis were hounding Walter Benjamin—and he had to commit suicide in September 1940—it didn’t matter that his mysticism had Judaistic context or he was a close friend of the philosopher of Jewish Mysticism Gerhard Scholem. A Jew was a Jew for the Nazis. If it had mattered that a Sufi Muslim was somewhat better than a “usual” Muslim, then during the Gujrat pogrom, mobs would have spared the Sufi shrines. But they didn’t. Because Muslim was a Muslim for them; even if he was a Member of Parliament, it didn’t change their hatred.

Although the situation for Muslims is not as precarious as it was for Jews in the 1930s, but the way President Trump could openly sign executive orders banning Muslims on the Holocaust Memorial Day must raise alarm bells. His national security council includes dangerous people like Stephen Bannon. Moreover, the hate crime against Muslims in the US has increased. The Pew Research shows that 257 incidents of anti-Muslim hate crime occurred in 2015 that is a 67% increase from 2014. And yet, violence against Muslims has been manifesting in other subtler ways.

One is through physical violence, which is visited upon a Muslim on a street in the form of a hate crime, but another is the hidden violence of indifference, schadenfreude and sadism—the latter two pervade social media. The hidden violence of indifference typically manifests itself on such occasions when, for example, the bloody attacks in France (or on whites) evoke world-wide sympathies and symbolic solidary gestures but not when such (and much brutal) attacks happen against Muslims. This kind of hidden violence reminds one of George Bernard Shaw’s The Devil’s Disciple in which the minister Anthony Anderson tells his wife:

“The worst sin towards our fellow creatures is not to hate them, but to be indifferent to them: that’s the essence of inhumanity.”

Thankfully, the recent demonstrations against the Muslim ban order have rekindled some hope.

In conclusion, I want to share an anecdote: One fine evening in 2013, my Indian friend walked into the common kitchen of our university dorm and he, surprised on seeing my newly grown beard, remarked with a toothy grin:

Of course he said this in jest, but I was deeply offended. However, the lesson this episode brought to me was this: your ardently secular, Rumi-loving friend may be nurturing racist, bigoted views without even realising it.

The author is a PhD candidate of Politics and International Relations at Dublin City University, Ireland. His articles have appeared in The Japan Times, The Caravan, The Express Tribune, Kindle Magazine, and in newspapers in Kashmir. He tweets @TahirFiraz

The problem with Vande Mataram and Hindu nationalism