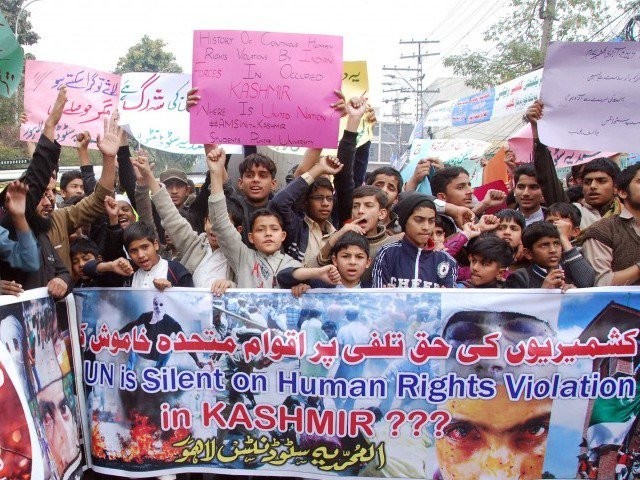 February 5th is also a day when the people of Pakistan and Kashmiri diaspora organise various programmes in schools, colleges, universities and even mosques to make Kashmir visible internationally. PHOTO: EXPRESS

In Pakistan, February 5th is observed as Kashmir Solidarity Day. It is a national holiday in the country. A number of solidarity rallies, seminars and awareness programmes are organised across Pakistan in support of the political struggle of the people of Indian-controlled Kashmir. By observing Kashmir Day annually, Pakistan expresses solidarity with the people of Kashmir.

What relevance does Kashmir Day hold for Kashmiris as on date? Has the pro-Pakistan sentiment in Kashmir enhanced or diminished over the last 28 years? Does Pakistan need to move beyond symbolism vis-à-vis Kashmir? Is it time for Pakistan to accept that the new, assertive, young and educated generation of Kashmiris is less pro-Pakistan and more pro-Kashmir?

Responses from the Indian-administered Kashmir are a mixed bag. Some are of the view that Kashmir Day holds “great significance” whereas others believe that it is a mere ritual that has been hijacked by the extremist elements.

Those who hold this view argue that Pakistan’s official position on Kashmir has not been consistent over the last 70 years since the very birth of independent nation states of Pakistan and India in 1947. They also say that Pakistan needs to understand that the anger against India does not automatically mean that Kashmiris favour a merger with Pakistan. Robust Kashmiri nationalism is a reality which they want the Pakistani establishment to understand, acknowledge, and respect.

Since the anti-India armed uprising, fully backed by the people of Kashmir, began in 1989 in Indian-held Kashmir, there has been perpetual gloom and dehumanising of Kashmiri society in more than one way. Kashmir has paid a huge price, not only with regards to an economic downfall, but also colossal damage to the social, humanitarian, fabric of the country. Every time a Kashmiri has dared to express his/her political aspiration, they have suffered. So when the world debates the nuances of the right of freedom of expression, they forget that for some people in the world, especially in Kashmir, that right is not even afforded. In fact, even trying to debate it is dangerous.

The Indian security apparatus has crushed the armed uprising. It has gone after the gun-wielding Kashmiri youths. It goes after the civilian protesters. It uses bullets and pellets to maim, blind and kill the youth who dare to express their political sentiment openly.

As of now, not more than 180 armed rebels are active in the entire Kashmiri region. They pose no serious threat to India’s military or economic might, but their presence gives India an excuse to label Kashmir’s struggle a form of “Islamic radicalism”.

Waning militancy does not, however, mean that the sentiment and aspiration for ‘Azaadi’ has diminished. It remains as strong as ever. This, despite unprecedented human rights abuses at the hands of the Indian army and paramilitary troops stationed in Kashmir in unprecedented numbers. Moreover, the violence perpetrated by the state and non-state actors has also inflicted deep wounds on the psyche of every common Kashmiri.

Pakistan needs to acknowledge that Kashmir is changing fast. Young Kashmir is constructing its own indigenous narrative. While everyone in Kashmir acknowledges Pakistan’s moral and diplomatic support to their political struggle for a permanent settlement of the Kashmir dispute and Pakistan’s role as one of the stakeholders, they also want Pakistan to understand that they are paying a cost on a daily basis. The blood of Kashmir’s teenagers has been spilled on Kashmiri soil for far too long.

The conflict has transferred to the fifth generation. How long can Kashmir afford to remain sandwiched between the regional hegemonic narratives of India and Pakistan? For how long can the Kashmiris suffer because of Kashmir’s strategic importance and geographical proximity to Pakistan? For how long shall Kashmir suffer in uninterrupted pain? Why should Kashmiris need a Hafiz Saeed to be on their side? Why not the civil society actors of Pakistan? Why not the liberal voices of the Pakistani society? Why not the media? Why are there no debates or dialogues with India with representatives of Kashmir’s political aspiration? These are some of the questions that the Pakistani society needs to deliberate upon and address.

Meanwhile, history tells us that Kashmir Day has been observed, historically, right from 1932, after being first proposed by the then Kashmir Committee to demonstrate solidarity with the people of Kashmir who were involved in a struggle against the autocratic Dogra ruler, Maharaja Hari Singh. In the present context, it is being observed to demonstrate solidarity with the struggle of Kashmiris against Indian rule. On February 24, 1975, Kashmiris had observed a complete shutdown on the call of Pakistan’s then Prime Minister, Zulfikar Ali Bhutto, to voice protest against the infamous Sheikh-Indira accord of 1975. Such has been Pakistan’s influence on Kashmir’s socio-political landscape. Almost every single Kashmiri cheers for team Pakistan in cricket contests against archrivals, India.

In 1990, Qazi Hussain, the late Jamaat-e-Islami (JI) leader of Pakistan, had proposed to observe February 5th as Kashmir Solidarity Day in Pakistan.

Throughout various political struggles in Jammu and Kashmir, many Kashmiris in their wills had requested their children and grandchildren to hoist the Pakistani flag on their graves once Kashmir merged with Pakistan, but is the pro-Pakistan sentiment as deep in today’s Kashmir? Even now, we see bodies of teenager protesters killed by Indian forces in Kashmir being wrapped in the Pakistani flags. The green flags replace shrouds. But what does this mean? It certainly demonstrates how deep the anti-India sentiment is in Kashmir, but it does not tell us that Kashmiris favour a merger with Pakistan.

There are some key observers in Kashmir who argue that in a suppressed environment like the one that prevails in the restive Valley, wherein democratic spaces for expression and dissent are choked, it is a difficult question to answer.

No denying the fact that February 5th does symbolise Pakistan’s deep-rooted relationship with Kashmir. They say that pro-Pakistan sentiment is neither dead nor diminished in Kashmir, it’s suppressed and reasons are rooted in the conditions Kashmiris are going through since the 90s. February 5th is also a day when the people of Pakistan and Kashmiri diaspora organise various programmes in schools, colleges, universities and even mosques to make Kashmir visible internationally. On this day, the Pakistani missions also spread awareness about Kashmir. According to key Kashmir watchers, it is an opportunity for people to engage with Kashmir.

Kashmiris are unhappy when Pakistani helmsmen change stances over Kashmir, when they talk about the UN resolutions one day, negotiated settlement or the four-point formula the next day. They want Pakistan to maintain consistency in its official policy.

Most in Kashmir are also deeply concerned about Pakistan’s overall security situation. They are genuinely concerned about the growing radicalism in Pakistan. They want Pakistan to prosper because they are aware that a stronger Pakistan is in their strategic interest. That’s why they are overjoyed over the predicted success of the multi-billion dollar China-Pakistan Economic Corridor (CPEC). They want Pakistan to be governed by a strong and democratically elected prime minister who can take bold decisions on Kashmir. We don’t want radical elements of Pakistan to hijack Kashmir Day.