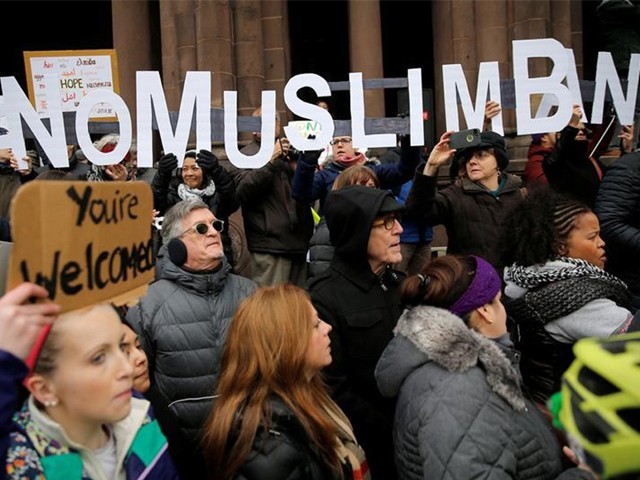 The media went on overdrive when Donald Trump, immediately after inauguration, followed through on his promise for a “total and complete shutdown of Muslims”. The New York Times reported:

When The Express Tribune asked if I wanted to write a blog on the Muslim ban, I started taking notes, and by the time I finished a draft, the story changed. So I rewrote, slept on it, and woke up to find my latest take obsolete. I could not catch up. The topic grew faster than the Monica Lewinsky and OJ Simpson scandals combined. Once the pushback swelled, CNN noted that,

“Between 1975 and 2015, foreign nationals from Iran, Iraq, Libya, Somalia, Sudan, Syria and Yemen killed exactly zero Americans on US soil, according to an analysis of terror attacks by the Cato Institute.”

Everyone seemed to notice the absence of Egypt, Turkey and Saudi Arabia from the list, whose nationals comprised 15 of 19 hijackers of 9/11, one of many inconsistencies. Aaron David Miller at the conservative Wall Street Journal wrote:

“The executive order seems to miss a key point: the primary threat to the US doesn’t seem to come from new refugees or visitors recently admitted into the country. Instead, the most serious challenge comes from homegrown jihadis.”

“At least 27 passengers have been detained or sent home from four different airports across the country today, and hundreds of people around the world were barred from boarding US-bound flights…”

On the home front, protestors marched at JFK, Logan, and almost every other major international airport. The American Civil Liberties Union (ACLU) received over $19 million in donation after their lawyers sued the government and as a result, a federal judge temporarily barred Trump’s executive order. Since the visa ban announcement caused chaos and confusion as to who was allowed to stay in or enter the country and who wasn’t, the White House Chief of Staff Reince Priebus eventually announced that green card holders may stay in the country and should not face any problems coming back into the country as well. All this made me wonder if Donald Trump ever played chess. Because if he did, he failed to learn anything about foresight.

And let’s not forget Imran Khan’s unique desire to have Pakistan included in the list of banned countries, as he suggested this will help Pakistanis focus on their own country and stop a “brain drain”. Most interesting was Mike Pence’s tweet in December 2015, where he states that the “calls to ban Muslims from entering the US are offensive and unconstitutional”.

Underlying all this absurdity there is a sad reality. There is no way the ban makes “us” safer. But it makes “them” less safe. Who are they? Our allies, including the Iraqis and the Syrians who risked their lives and that of their families by offering logistical support, interpreter services, and genuine friendship.

We already have a process of extreme vetting that works. Today is not the same era as when my grandfather, born in Iran, and my father, born in Lebanon, immigrated to the United States. Presently, the need to accept refugees is greater, for they come not only to take advantage of opportunity, but to escape oppression. And isn’t helping people worthwhile?

So I conclude my last draft, and if something else happens, dang it, I’m not going to revise. I’m not sure this blog will change any minds, but hopefully there’s some ammunition here that might help a reader convince a reluctant Trump supporter to doubt Trump’s competence. For Trump deserves nothing less than our vigilance.