In a country with barely any women rights, Nusrat Abbasi just made matters worse 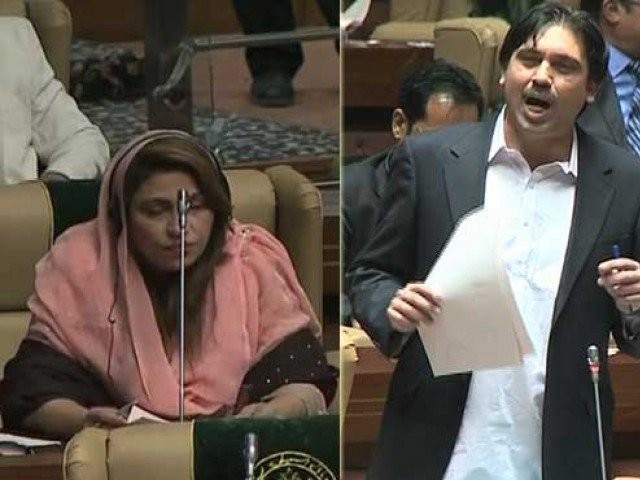 How important is the calibre of female representation in the Assembly to us? PHOTO: SCREEN GRAB

In the land of sufis and saints, the province which gave birth to Benazir Bhutto and where Abida Parveen’s voice transcends gender, we saw a despicable example of massive regression to the Stone Age.

Recently, Pakistan People’s Party (PPP) Provincial Minister Imdad Pitafi disrespected a woman, Pakistan Muslim League-Functional’s (PML-F) MPA Nusrat Abbasi, by passing offensive and sexist remarks in the Sindh Assembly. The incident repelled every ethical Pakistani. It symbolised everything that is wrong with Sindh right now – a man of such caliber, bearing Bhutto’s party name, with an important portfolio to boot (minister for Works and Services), having the audacity and the ignorance to disrespect a woman parliamentarian and guffaw arrogantly on national television.

Furthermore, it was worse to see Assembly Speaker Shehla Raza laughing indulgently at the remarks while half-heartedly berating her fellow party members, and Sindh Chief Minister Murad Ali Shah was seen sitting apathetically with a cheeky smile. This only went on to show the internal culture of the ruling party, PPP.

Abbasi, who is known for her loud opinions and active role as opposition, received a lot of vocal support from personalities across the spectrum. With the world charged with the Women’s March and Donald Trump’s misogynistic and chauvinistic rhetoric, we Pakistanis were rightfully and righteously indignant.

However, it was unfortunate, then, to have the honourable MPA stand on the steps of the Sindh Assembly with a half-filled bottle of petrol, demanding Pitafi be stripped off his titles, or else she will self-immolate.

Pitafi, little known except for his scavenging of party bigwigs and alleged setting up of illegal toll plazas, has now shot to fame with yet another black mark on his resume.

In an environment positively charged towards her, with notable women and men of every profession, every political party, speaking in her favour, Abbasi managed to do herself more of a disservice than the barely literate and allegedly corrupt minister possibly could. By stating that the only avenue she had, if her demand was not met, was to publicly commit suicide, depicted her as no more empowered and no less helpless than the countless, uneducated women of the country.

If a sitting MPA, a public representative, presents that the only course of action she has is to end her life in order to counter injustice, Abbasi has made no less a mockery of the Provincial Assembly and of women’s rights than Pitafi has.

Pitafi’s insincere apology followed during the session, after major pressure and backlash from his leadership, and so he lumbered off to Abbasi’s seat, with a saccharine promise to make her his sister once he donned a chador upon her head. Since this is a grand gesture as per the customs of Sindh, Abbasi tearfully acquiesced and forgave her abuser.

Soon after, everyone picked up their clubs, climbed up their respective mammoths and shuffled off to their caves. Because this is what it has come to – a complete disintegration of education, public representation, accountability, human rights and manners. This whole sordid saga should make us ask some very pertinent questions.

Who is Imdad Pitafi and what could possibly qualify him to be the Minister of Works and Services? Is his BA degree from Jamshoro University, legitimate and enough? And seeing as he has had no prior experience with a portfolio, or years of political maturity, is it safe to assume he is a ministerial novice, especially to as essential a ministry as this one?

Furthermore, given that he is a member of four important Standing committees (Excise and Taxation, Irrigation and Power, Local Government, and Youth Affairs and Sports) doesn’t his behaviour, mind-set and lack of professional education warrant his stepping down in favour of someone better qualified?

Most importantly, how important is the calibre of female representation in the Assembly to us?

In conclusion, it is imperative to remember that we have entrusted our province and Assembly to the likes of these people. Before we laugh it off as another media circus, we must keep in mind that they affect us, they represent us, and they hold the power to help or hurt countless lives.