Can the Quetta Gladiators take home the PSL 2017 trophy? 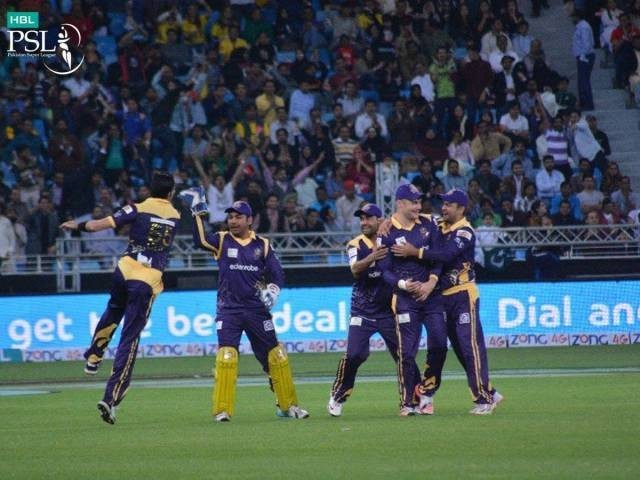 If these players live up to their expectations, the Gladiators will most definitely end up on the right side. PHOTO: PSL.

This phrase accurately portrays the Quetta Gladiators’ campaign in the inaugural edition of the Pakistan Super League (PSL). Even though they were not able to cross the final hurdle last year, this time, however, it’s possible for them to lift the title.

With the second season just around the corner, the Quetta-based franchise is probably hoping that the team can replicate it’s heroics from the first edition but for that to happen, some of their key players would really have to raise their game.

The talented right-handed opening batsman has fallen out of favour with the selectors on the international arena but that does not negate the fact that he has been in red hot form in domestic circuit. This is definitely a good omen for his franchise.

Shehzad was by far the best batsman for the Gladiators in the first edition, making close to 300 runs at a strike rate of more than 140, along with a couple of half centuries. He’s an experienced player, and the team needs his experience to bring it to the top.

Shehzad, like many other Pakistani players in the league, will be acclimatised with the conditions in the UAE, which is why he needs to use that to his advantage and contribute handsomely with the bat and lay a solid platform for the Gladiators at the top of the order.

Shehzad was by far the best batsman for the Gladiators in the first edition.
Photo: AFP

The flamboyant English player, Kevin Pietersen is a vital part of the Gladiators outfit. He is the kind of player who can command respect on the field with his approach towards the game. Due to his experience playing in the T20 format, Pietersen always has advice for Captain Sarfraz Ahmed, which is evident from the first edition of the PSL. This kind of advice is crucial, especially during the crunch moments of a match.

Pietersen has been piling on the runs in the on-going Big Bash League in Australia which is a good sign for the Gladiators because they would want his purple patch to continue till the end of PSL since it will bring a lot of stability to their batting line-up.

A match winner like Pietersen is a blessing in disguise for any cricket franchise because a player of his calibre can single-handedly win matches, no matter how desperate the situation may seem.

A match winner like Kevin Pietersen is a blessing in disguise for any cricket franchise.
Photo: AFP

Nawaz was one of the great finds during the first edition of the PSL. He stole the limelight with his all-rounder capabilities, especially his bowling. His immaculate control with the ball and ability to pick up wickets at crucial moments made him an indispensible player. He was the highest wicket-taker for the Gladiators in the first season of the PSL, with 13 wickets and a staggering economy rate of less than seven runs an over.

He is a handy left-handed batsman with a calm head on his shoulders, which is rare for a Pakistani player at such a young age. Although he was not able to contribute to the best of his abilities with the bat during the first PSL edition, that does not indicate that he is not a fine player.

He stole the limelight with his all-rounder capabilities, especially his bowling.
Photo: AFP

The 29-year-old wicket keeper-cum-batsman Sarfraz Ahmed is a utility player who can score quick runs at the top of the order or even lower down in the batting line. His movements in and around the crease can trouble even the best bowlers in the business and his batting plays a key role in maintaining the balance of the side.

As the skipper for the Quetta Gladiators, Ahmed has always impressed with his captaincy credentials. He marshalled the troops exceedingly well during the inaugural edition, which was evident from his clever fielding placements and appropriate choice of bowlers. Even renowned analysts and commentators heaped praise on how he led the side during the entire tournament but was unfortunate not to cross the final hurdle.

Ahmed was the strongest contender to be appointed as Pakistan’s ODI skipper, especially after Azhar Ali’s mediocre tenure as captain.

As the skipper for the Quetta Gladiators, Sarfraz Ahmed has always impressed all with his captaincy credentials.
Photo: AFP

Although cricket is a team game, the Quetta Gladiators will be eager to see these players fire on all cylinders during the second edition of the league. You can be rest assured that if these players live up to their expectations, the Gladiators will most definitely end up on the winning side and maybe even go on to clinch Pakistan’s most coveted trophy.