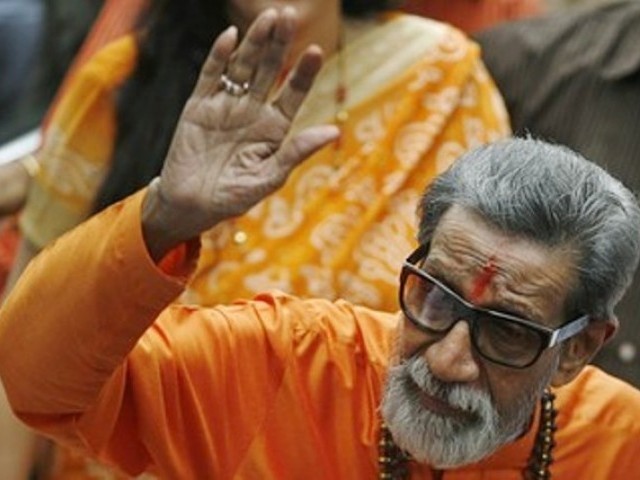 The Shiv Sena was lying pretty low for a while but that was too good to be true. This publicity hungry party decided to tell the people they exist during the cricket season.

One comment from Shahid Afridi, saying an India-Pakistan final would be a good watch, was enough to trigger anti-Pakistan sentiment. Bal Thackeray will apparently decide whether or not to allow the Pakistani team to play at the Wankhede Stadium in Mumbai if they reach the finals.

Till Bal Thackeray headed the Shiv Sena, the party had a moderately strong hold in Maharashtra. However, after his son Uddhav Thackeray took over the party the formation of the Maharashtra Navnirman Sena (which unfortunately works on similar lines), the party soon became a toothless tiger.

Starting off as a cartoonist for a newspaper, Bal Thackeray’s political career begain in the 1960s, thanks to the Congress who gave him a free hand to do whatever he wanted to in order to tighten their grip on Mumbai’s industrial unions. At that time, Thackeray was leading an anti-migrant campaign as well – though at that time it was against South Indians and Gujaratis and now it’s against Biharis and UPites.

Thackeray became the uncrowned king of Mumbai. He was soon feared across Maharashtra as many were forced to bend to his flawed policies.

Despite this power Thakeray has one major flaw:  his policies on issues were never consistent. From anti-migrant issues it shifted to anti-Muslim. Then, when that lost steam, he went back to the anti-migrant policy, moving soon to his anti-Pakistan rants and not to forget, the in-between campaigns against Western culture (especially Valentine’s Day.) The only thing consistent about him was the way he communicated his messages – through violence, hate speeches, fiery articles and vandalism.

Things have changed. The party which was supposedly based on safeguarding the rights of Maharashtrians, never really managed to do anything to uplift the Maharashtrians, besides changing names of cities, flyovers etcetera. All it has managed to gain is the people’s hatred and honestly, enough is enough with his hate and divisive politics. In Maharashtra, there may still be a few Maharashtrians who look up to him, but anywhere else in India, I don’t think his views even matter.

So what does he do? Resort to attention grabbing tactics, all of which have backfired on him.

Thackeray first shot his mouth off by slamming Sachin Tendulkar for saying that Mumbai belonged to all. The end result of that was that he was forced to eat his words.

Next he condemned Shahrukh Khan for his comments on Pakistani cricketers playing for the Indian Premier League (IPL) and called for a ban on his movie. The end result – the movie went on to become a blockbuster.

Then he opposed Rahul Gandhi’s visit to Mumbai and called it a publicity gimmick. Rahul Gandhi managed to win the Mumbaikars’ hearts by bonding with them which the Shiv Sena has never managed to do in all these years.

Now coming back to the present. Bal Thackeray has shot himself in the foot yet again by saying he will not allow the Pakistani team to play if they reach the finals.

Firstly, he should have thought about this when Wankhede Stadium was decided as the finals venue, not that his opinion makes a difference.

Secondly, who is asking for his permission? He isn’t exactly in power and no one really cares about his hooliganism anymore, so what makes him think the people will support him? And if this is supposed to be his idea to prove his nationalist sentiments, then he should realise that by disrupting the final, he will only cause worldwide shame.

Lastly, do not mix politics in sports, especially not cricket. In this cricket crazy country, where cricketers are held at a higher pedestal than any politician, talking about causing problems during the World Cup is akin to playing with fire. This time Maharashtrian or non-Maharashtrian, no one will tolerate it.

So in conclusion, I think we have all had enough of your hate politics and your parties deteriorating political standing is proof enough for that.