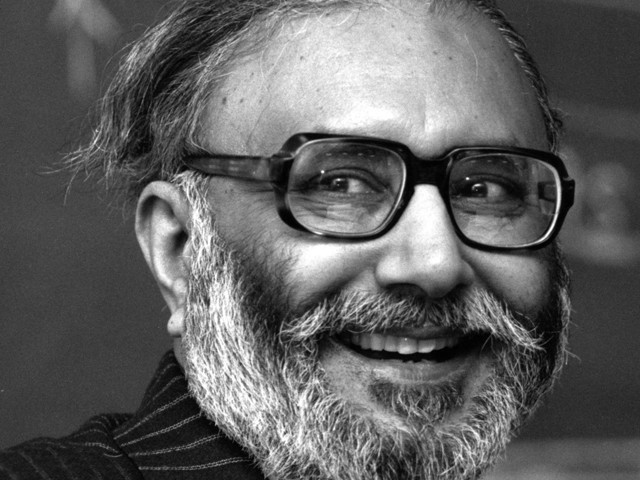 We failed him, and proved how truly unworthy were we of him. PHOTO: TWITTER.

“There is no question, but today, of all civilisations on this planet, science is the weakest in the lands of Islam. The dangers of this weakness cannot be over-emphasised since honourable survival of a society depends directly on strength in science and technology in the conditions of the present age.” – Abdus Salam

It was last year, on December 5, when I woke up to the news that Prime Minister Nawaz Sharif, had approved the proposal to rename the National Centre for Physics (NCP) as the Abdus Salam Centre for Physics (ASCP), along with five PhD fellowships annually in Abdus Salam’s name. This was a pleasant surprise, as this step was taken by the same state that had earlier failed to honour the first Nobel Laureate of Pakistan himself. After this momentary delight, I wondered if ASCP would emerge as Pakistan’s equivalent to The Abdus Salam International Centre for Theoretical Physics (ICTP), in Trieste, Italy.

Abdus Salam was born in 1926 – he was a poor boy from Jhang, who had not seen electricity until his teen years. He scored record-breaking marks in his matriculation examination in all of Punjab, at the young age of 14. He never looked back, and finally emerged as one of the greatest theoretical physicists of the 20th century. Together with Sheldon Glashow and Steven Weinberg, Abdus Salam received the Nobel Prize for his contribution to the theory of the unified weak and electromagnetic interaction between elementary particles, in 1979.

Furthermore, he paved the way towards the discovery of the Higgs boson, also known as the “God particle,” which is considered the biggest scientific breakthrough in decades. Despite being excommunicated by his own nation over state discrimination and an inflexible social attitude, he remained loyal towards Pakistan. He even wore Pakistan’s national dress – the shalwar kameez – whilst accepting his Nobel Laureate. He didn’t accept citizenship from any other country, and kept his Pakistani nationality till his last breath – he was a true patriot.

He worked as the science advisor for President Ayub; served as the founding director of the Pakistan Space and Upper Atmosphere Research Commission (SUPARCO); helped in establishing the Pakistan Atomic Energy Commission (PAEC), as well as contributed towards the Pakistan Institute of Nuclear Science and Technology (PINSTECH). Furthermore, he mentored Professor Riazuddin, the man who designed Pakistan’s atomic bomb.

These are just a few of his long list of contributions for Pakistan. The irony is that none of them, including the prestigious Nobel Prize, stopped his countrymen from rejecting him or from calling him a traitor. This was not only a personal loss for Salam, but a national tragedy as well. He dreamt of establishing an international research centre in Pakistan to awaken third world and developing countries, but it was made impossible for him, thus, he ended up inaugurating the institute in Italy. He also established the Third World Academy of Sciences (TWAS) there (later renamed The World Academy of Sciences). Today, thousands come to ICTP and TWAS each year to be inspired by his vision.

Abdus Salam, in one of his essays, recalls a Nobel Prize Winner from a European country speaking to him:

“Salam, do you really think we have an obligation to succour, aid, feed and keep alive those nations who have never created or added an iota to man’s stock of knowledge?”

And this is a reality check. Our share in the modern world is too difficult to trace.

Take a look at the current indices of the Muslim world, say in education, health, economy, science and technology – it’s evident that we have fallen to an all-time low. A little introspection reveals that Pakistan has the world’s weakest higher education system, ranks third on the list of countries with the worst reputation, 149th in UN health goals among 188 countries, 147th in the Human Development Index, 119th on the Global Innovation Index out of 128 countries, 108th on the Global Hunger Index among 118 countries, stands among the 10 worst countries for internet freedom, ranks third in human slavery out of 167 countries, ranks second worst for travel freedom, stands in the bottom 10 countries for freedom of speech, tops the list for the worst countries for religious freedom, and so on.

The intellectual stagnation of the Muslim world in general and Pakistan in particular, is not accidental; it is due to a series of correlated miseries that we allowed to befall us. For instance, we didn’t allow the culture of rationality and free thought, and hence, scientific reasoning never flourished here. We considered science an antithesis of faith, and those academics who tried to show the world that both of them are compatible were shunned. In addition, aesthetics, art, and culture were also side-lined, and the state policies along with theological legislations pushed us to the wall even more. As a result, the space for progressive and intellectual discourse kept shrinking that ultimately led to this painful mess we are in today.

The Muslim Ummah constitutes one fifth of mankind. We had a proud past, from the eighth to the 13th century – the period referred to as the Golden Age of Islam – when Muslims were the torchbearers of knowledge and intellect. Unfortunately, our contribution to science and technology is currently non-existent. The Mongols invaded Baghdad, and destroyed the Bait-ul-Hikmah (House of Wisdom), a centre of excellence, but it cannot be considered the reason for our fall.

It was the home-grown religious orthodoxy that existed much before it, something that was responsible for naming the intellectual giants of Muslim civilisation heretics and for their persecution. Take these examples: Al-Kindi (801-873) was publicly flogged before a large crowd, and his library was confiscated. Al-Razi (854-925) was hit on the head with his own book till he lost his eyesight. Ibn Sina (980-1037), a Hafiz-e-Qur’an himself, was declared an unbeliever by Imam Al-Ghazzali; his books were banned and he had to flee to save his life. Similarly, books of Ibn Rushd (1126-1198) were ordered to be burnt. Fast forward to recent history we have another intellectual, Abdus Salam, who was also an outcast because of the same mind-set which rejects reasoning and considers rationality a threat.

The enterprise of science has uniform principles across the globe; there is a well-defined scientific methodology that is the same for all students of science regardless of their geography and ideology. Hence, scientific knowledge has emerged over history and Muslim countries need to realise that they are dependent on science for their survival and progress. Otherwise, science doesn’t depend on them.

Abdus Salam wished to build an enterprise of science in Pakistan – a research centre that could act as a precursor for the revival of knowledge – not only for Pakistan, but for third world and developing countries as well. He passionately advocated the importance of science for preferment of Muslim countries. We failed him, and proved how truly unworthy we were of him.

Will Pakistan be able to produce another Abdus Salam? The answer, in the present and in the near future, is a big no. The state of science in Pakistan is dismal, school curriculums fail to inspire any interest in this beautiful subject, orthodoxy is dominating society, and space for free thinking and rational enquiry doesn’t exist. The Muslim world, by and large, has the same scenario, and one can rightly refer to our present as the dark ages for Muslims.

Amidst these discouraging signs, here’s a welcoming step from the government that infuses hope. The prime minister has recently honoured the oft-overlooked Pakistani hero by renaming NCP as ASCP. Pakistan has made a number of wrong choices, but it’s time to correct them. Let’s celebrate the 91st birthday of Dr Abdus Salam today by resolving to carry the torch of Salam’s vision and shining the light on intellectual freedom, reasoning, and scientific knowledge in the country.