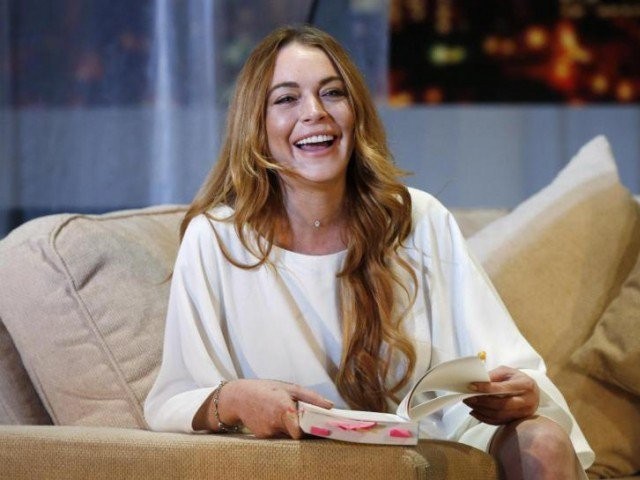 Actress Lindsay Lohan rehearses a scene from "Speed-the-Plow" by David Mamet at the Playhouse Theatre in London in this file photo taken September 30, 2014. PHOTO: REUTERS

A blogger posted a screenshot of Lindsay Lohan’s new Instagram bio. She had deleted all her posts and the bio read “Alaikum salam” which translates to “peace be unto you.”

As a joke, I took a screenshot of the bio and put it up as my cover photo on Facebook. One of my friends asked in the comments,

“All she has to do is be herself.”

Lindsay Lohan has been the poster child for Hollywood’s influence gone wrong on child stars. From her shopping habits, to friendships, to her drug addiction; everything about her has been considered public property. Her dirty laundry was never hers in the first place. It was tabloid fodder from which media outlets could just cause a buzz and find something to talk about. Lohan’s life had never been hers. But over the past couple of years, things have been changing. Maybe it’s because social media enables celebrities to post pictures of the parties they go to before they hit the tabloids, or maybe it’s because we’re slowly becoming more aware of how the paparazzi culture affects celebrities and their lives, and things are being done about it. Lohan has managed to rise above the past and evolve into someone who’s staying out of trouble.

That is, until this screenshot happened and I got those comments. I think a part of me wanted to know how the world would react to this, so I posted it. And the comments I got really helped prove to me why Lohan’s updated bio matters.

The two comments I got on the picture really explain everything that’s wrong and right in our minds and how we perceive people. Let’s talk about the ‘what’ comment first. We question every step and every intention of every person and have made it become an integral part of the conversationalist culture we are growing up in.

#LindsayLohan is obviously uninformed and doesn't appreciate or care about the atrocities Muslim women face, rapes, lack of rights etc…

This is what’s wrong with us. We fail to see the logic of the person through our eyes, because we judge them based on how we live our lives. Sure, Lohan was a party girl, and now it seems as if she’s trying to get out of it, and this just might be a publicity gimmick, but shouldn’t we laud her for having the ability to think things for herself? We, the feeders of the fast food news, are the reason why Lohan is where she is. Our desire to indulge into other people’s lives is what caused Lohan to go down the wrong path, and now that she’s trying to change herself, we question her still? Alaikum salam to you too, buddy!

The path to Catholicism is paved w/ painstaking intellectual investigation.

The path to Islam is paved w/ moral degeneracy. #LindsayLohan

So apparently #LindsayLohan has converted to #Islam. Those drugs must have really "jihaded" her brain cells… ;^)

So do we really have the right to judge, and talk about a person whose decision to not party, or quit alcohol is in no way going to impact our lives?

Islam Qabool ker liya ??? Ok #LINDSAYLOHAN if its true then welcome to the 7th century … https://t.co/A3Hq9dBXzj

Every one claiming she has converted is speculating and drawing conclusions based on one phrase that is used as a form of greeting in Arabic countries. People greet one another in every single language. If Lindsay had written ‘namaste’ would people have assumed she had become Hindu? Perhaps her trip to the Middle East had something to do with her picking up on the greeting.

It’s possible that maybe she has converted. An individual has the right to decide what they want for themselves. And if it is changing religions, who are we to judge? Lohan might be converting to Islam, but how does that affect us?

Religion is a very personal matter. It is between the individual and the God that they believe in. So really, nothing about Lohan’s decision to put up “Alaikum salam” as her bio has any influence on our lives, except when we decide to shut her down.

Let’s not forget that religion teaches us to be kind to the living beings around us, and an example of that is when a prostitute was granted heaven for giving water to a stray dog. It didn’t matter what religion she subscribed to or if she even followed a religion.

And if Lohan really is converting to Islam, her past is all that it is; her past. And we can only wish her good luck on this journey of self-discovery and finding the peace she desires.