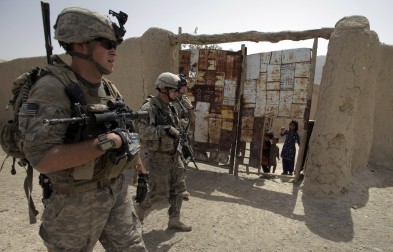 US Afghan strategy has been dealt one blow after another of late, and the war efforts seem to be faced with a much greater resistance and criticism, both from within and without. The Af-Pak policy seems to be in a serious jeopardy after the current stream of events. The Rolling Stone article exploded into the face of American policy-makers. Despite the claims made of the extensive legislations and policy-making over US military operations in Afghanistan, it’s been General McChrystal and his ‘Team America’ who’s been calling the actual shots, says the article. As if this was not enough to wrestle away President Obama’s optimism of an ‘honorable exit’, the rapid surge in US army’s death toll has topped things up. Marjah has turned out to be a nightmare for US soldiers and still stays far from being declared a clean zone.

Meanwhile, a number of parallel factors have been established into the entire Afghan saga. The COIN strategy, introduced into Afghanistan by General McChrystal and his team, continues to exact a high toll of civilian casualties. This has resulted in harsh criticism from human rights’ activists. General McChrystal, in a special meeting, explained to President Karzai the reasons that entailed such collateral damages and assured him of contained deaths in future operations. He later imposed stricter regulations on soldiers for their ground assaults but it quite resulted in a conundrum since COIN thrives chiefly upon ruthless and swift attacks, with a large number of ground troops involved and contained assault comes to bear heavily upon its effectiveness.

Naturally enough, soldiers involved directly in these ground operations were reported to express resentment towards this development. The most important part, however, is that General Petraeus, the new head of US Central Command over Afghanistan has, in the face of mounting pressure regarding the humanitarian crisis, produced prompt statements affirming General McChrystal’s policy towards an ‘improved’ COIN strategy. Again, this means that such a measure will in actuality depreciate US ground effort in Afghanistan. In fact, a large faction of critics and security analysts label COIN as out rightly ineffective and a failed strategy plan.

The McChrystal debacle has also brought forth the lack of co-ordination that exists between Washington and the actual happenings in Afghanistan. It ascertains the notion that the military has been largely independent in making its war-time decisions in Afghanistan, often contradicting those made by the civilian representatives. President Obama’s rage is quite understandable over the General’s scandalous remarks towards a number of personalities, including the Vice President. He declared in his statement that the General’s conduct “undermines the civilian control of the military that is at the core of our democratic system”. However, some factions seem to heed the rather scathing remarks McChrystal procured towards the Obama administration.

President Obama himself, despite having stated that the US will start forces’ withdrawal from Afghanistan by 2011, went on with the decision to send yet another 30,000 US troops to this war. Clearly, even when he couldn’t accept his commander’s criticism, he had to consent to the war-needs which depict that US war is far from being won.

A very intriguing, and important development, in this entire episode is the emergence of Pakistan as a chief negotiator and power-broker. Within hours of McChrystal’s unholy fall from grace, Pakistan rose to the status of sins-redeemed. Not only is the US government eager on ‘proving’ its sincerity on Afghanistan, it has gone a step ahead to appease Pakistan when none other than the US Joint Chiefs of Staff Chairman Admiral Mike Mullen regarded Pakistani nuclear assets as the ‘much-needed deterrence’ and ‘their crown jewels.’

A remarkable shift, one can’t help but wonder, from the earlier US stance of pointing fingers at the same weapons’ vulnerability to being exploited by militants. Rumors about General Kayanis efforts in trying to broker a deal between Taliban and the Afghan government are also doing their rounds despite the Generals denial of having facilitated any such arrangement. Such media pronouncements may also be a reason why US authorities have displayed a sudden desperation in being more lavish in asserting ‘friendliness’ towards Pakistan, being wary of a possible ousting from the final equation.

Taking a more local view, if indeed the current Af-Pak policy fails to be replaced with one where Taliban are an essential part of the settlement, this shall have disastrous implications for both Afghanistan and Pakistan, much more so for the latter. With popular support from a vast majority of Afghans and money from petro-dollars already on their side, Taliban will then have a legitimate political power at their disposal which they may essentially expend in furthering their narrow-set ideology.

Afghanistan may not bear a deeper brunt than the ones it has in the past in case so happens. Pakistan, however, will be left to lick wounds of a war which came to a meaningless end and in which it suffered a lot. With its large territories under army operations in an attempt to cleanse them of the militants, Pakistan will then move back to point zero, with Taliban in an even stronger position than before. It’ll also mobilise the Jihadi factions for here will be there chance to re-emerge, more victorious and all the more virtuous. In short, Pakistan will be back in Zia Times, essentially made to take a policy shift which will once again legitimise self-proclaimed Jihad.

Nevertheless, if Taliban come down to a settlement where they give up arms and come to participate in a democratic establishment, this ought to be considered. US, Pakistan and Afghanistan can work together to create an arrangement where the militant influence is eliminated and replaced with a parliamentary participation. If indeed this is achieved, it is perhaps the best choice for everyone. However, it may sound a little Utopian now. But we can always hope for better!