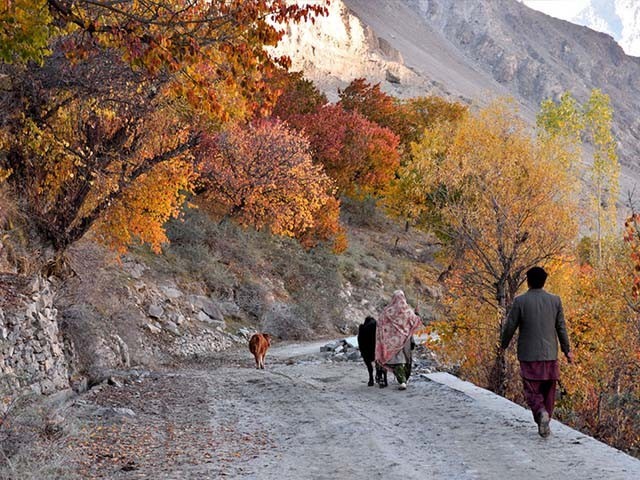 It has the world’s most majestic mountains that will take your breath away. PHOTO: MAJID HUSSAIN.

The old man had the most startling blue eyes, the kind that glittered in a wizard-like way. He was a contractual worker fixing some room in the building where I work, and I met him in the kitchen over my morning coffee. He asked where I’m from and widened his eyes. He didn’t comment on how good my English is, but how American my accent is (which I take no offence or pride in – it’s not the two years of Master’s in St Louis but all those American movies and TV shows I watch).

And then he asked me that question,

The question always bounces off me like a gummy ball against the wall. It’s a loaded question, even if it’s not really meant to be, and I usually respond in two ways:

1. The most generic of answers:

Which means absolutely nothing and really, when you think about Pakistan, nice really isn’t the most appropriate adjective. How about – incredible, wild, crazy, tragic, beautiful, turbulent, difficult to describe?

“Well yeah, the traffic is horrible.”

Which is true, of course, but when someone asks about what your birthplace/homeland is like, do you really want to start, and in most cases end, with that?

For some reason the question makes me antsy. I feel the need to invite the inquirer to a presentation where I can have at least 30 minutes to go through a stack of 15 slides, highlighting some aspects of what my country is like. There is an insistent need to not say anything negative because there is already so much negativity out there. But if I don’t mention any of it and say it’s beautiful and lovely and the crispy tandoori parathas make everything worthwhile, then I’d feel dishonest because how can you not mention the poverty and the overpopulation and the widespread intolerance?

I wish I could say it’s horrifically dirty and there are slums like Machar colony in Karachi where children about the size of bonsai trees run around barefoot in five inches of sewerage, poking at tired dogs with patches of skin visible on their skeletal bodies.

There are so many people – it’s like when you shake a can of Pepsi and open it, and there’s an explosion of foam, people pouring out, milling about in streets, squatting on their haunches, sipping tea from small glass cups, standing behind stalls selling bright purple eggplant and pale coloured cabbage, spread out on dry grass in parks sharing sandwiches and samosas, buying plastic jewelry and plastic slippers in markets, perched precariously, three, four, five and a baby on motorbikes, playing ludo late at night under streetlights…

It’s haphazard and unruly; nobody follows the traffic rules and there are too many cars, the bus drivers are psychotic and pedestrians more thrill-seeking than the young men who throw themselves off cliffs – they’ll dart in front of speeding cars or pause in the middle of crossing the road to glance back at a straggling child. There are no bus lanes, no bike lanes and the 1,000 ton-containers are never bolted down on their barreling wagons. Sometimes there are cows and camels.

We have too many stray dogs and cats and street children and beggars with amputated limbs.

And then there is the sea that surges on and on, despite everything that has happened, and there is joy at the dirty, polluted smudgy Sea View beach where thousands of people wade in, fully clothed, holding hands as the gray sea sweeps over them, toppling them like an unruly friend, backing away just so they can get back on their feet again and then coming back again, cresting, jumping over, drenching, and if you want, there is popcorn and french fries and charred cobs to munch on.

And sometimes there are fiery sunsets that whip across the sky like the orange-gold-yellow streaks of paint by a madly talented artist and your mind is wiped clean of all thoughts as you watch the burning ball of sun slipping slowly down and into the misty gray sea.

It is scattered with large pockets of intolerance that breeds in small madrassas and small minds, fanned by poverty and frustration and evil. It is fed into young minds and shared in fancy living rooms and offices too.

It is peppered with smaller pockets of beautiful, brave people who speak out against injustice and preach love and peace, it’s scribbled in moldy notebooks and discussed on the grey seats of classrooms and in cozy cafés with art on the walls and warm orange lamps, and every now and then at larger gatherings under palm trees and wind-blown canopies next to stalls of books and children browsing through them.

It is populated with passionate, persistent people who have left lofty jobs and neat queues to come back to their unruly messy country and work there despite its maddening ways.

It has sunny blue skies.

And when it rains in Pakistan, people don’t put up their umbrellas or pull on their Wellingtons, they rush out and get drenched. Kids hop around in puddles and mothers fry pakoras and friends share cups of steaming tea.

It has people who are nosy and judgmental and you call all strangers aunties and uncles and bhai and behan, and old women you meet for the first time on a bus will ask you if you’re married and why you don’t have kids and what you earn, and many men will stare at you as you walk down a crowded street.

It has people who have hearts as big as the sky and if you visit their house, with a survey or a question, they’ll offer you anything from fried bhindi to roasted peanuts, and chai – they’ll always offer you chai. They’ll help you reverse out of a tight spot and they’ll help you change your tire, and they’ll give you directions even if they don’t actually know the way, and you can always ask to hold their cherubic baby, they won’t think that’s creepy at all.

It has hundreds and thousands of people who march for things they don’t fully understand.

It has artists and film directors and writers and festivals celebrating culture, literature, food, music, and these are slowly growing.

It has mouthwatering delicious food – Karachi’s bun kebabs to Lahore’s fresh water fish and tikkas to Peshawar’s chapli kebabs and have you ever tried the cottage-cheese rotis in Hunza served with apricot chutney? Fruits and vegetables and nuts and don’t ever forget the chai, the spherical dense doughy parathas crispy on the outside and soft and buttery on the inside.

And it has the world’s most majestic mountains that will take your breath away and when you stand in front of a snowcapped jagged brute of a mountain with the sky for a crown and the sun for a mirror, it will be like a zap from a wand. You’ll be turned into a tiny speck of dirt and you’ll never feel so insignificant and you’ll never love that feeling of insignificance anywhere else.

So you see, “what’s Pakistan like?” is not an easy question to answer.

Because, you see, Pakistan is complicated and rich and diverse and beautiful and horrible all at the same time.

And then, Pakistan is home.