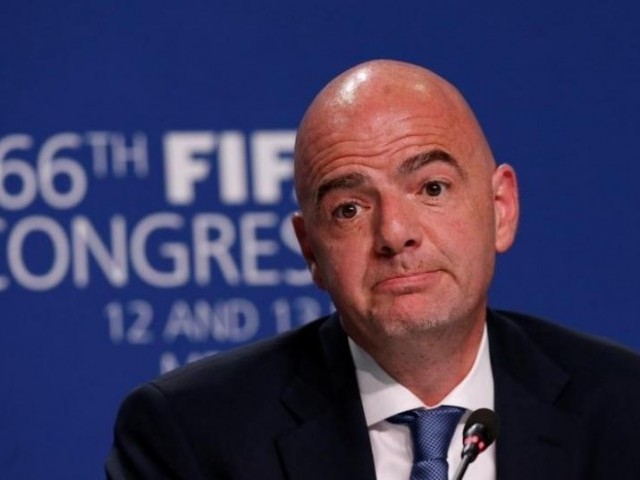 It seems like Mr Infantino’s dream of becoming the football version of The Great Gatsby is about to be realised. PHOTO: REUTERS

Fourty-eight teams. Now that would be a long list of participating countries to remember. I, for one, wouldn’t make it past 15, 20 tops. But fourty-eight!? You have got to be kidding me. The Fédération Internationale de Football Association (FIFA) decided to expand the leading global tournament to a whopping 48 countries from the current perfectly reasonable number of 32 teams, starting from the 2026 FIFA World Cup. The sport’s world governing body, in a landmark unanimous vote, chose to increase the countries at a meeting held in Zurich on Tuesday.

Current FIFA president, Gianni Infantino, has been the driving force behind this move as he had always wanted the tournament to be more inclusive meaning the current 211 members of FIFA will now have more of a chance to participate in the major event.

“It is the future. Football is more than just Europe and South America, football is global.”

“The football fever you have in a country that qualifies for the World Cup is the biggest promotional tool for football you can have.”

“This football promotion, in many parts of the world where today they have no chance to play at the World Cup, was at the top of our thoughts.”

So is mere promotion really what drove the decision, or is it another cunning FIFA ploy to line their pockets? According to an estimate, the additional 16 teams will generate an extra income of $1 billion. However, Infantino had always maintained innocence that the move was never financially driven and has kept on insisting that it will boost the development of the game globally.

Well, cricket fans would recall the utterly wretched 2007 edition and state otherwise. The tournament held in the Caribbean was a complete bore-fest spanning a mind boggling 51 matches. The surprise first-round exits of the subcontinent rivals Pakistan and India made it worse. But that merely reinforced the fact that long, tedious formats involving a large number of participants can take a heavy toll on fans, especially if your own team or tournament favourites are not a part of the mix.

So ‘how does it really work?’ you might ask. Since 1998, a total of 64 matches are played amongst the 32 teams which are divided into eight groups of four teams each. However, this major decision will now increase the numbers of matches to 80 games and the teams will be split into 16 groups of three. The top two teams from each group will then advance to the knock out stage of 32 teams with normal service resuming from there on.  However, the eventual winners will still play a guaranteed maximum of seven matches in the tournament as they do now.

Many European clubs had showed their concerns for the move, believing it will further crowd the already busy international schedule, resulting in more chances of fatigue and injuries.

It seems like Mr Infantino’s dream of becoming the football version of The Great Gatsby is about to be realised i.e. the guy who can draw a huge crowd to his grand parties. But with so many guests invited, imagine the horror if chief merrymakers, like Brazil and Germany, exit the festivities a little earlier than expected.

Guess, we will just have to wait another decade to see how this particular party fares!