What is so similar about Pakistan and Turkey? 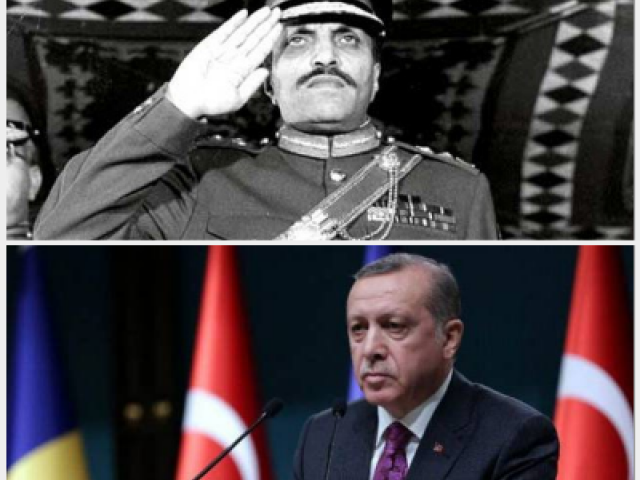 General Zia and Erdogan both came into power after a coup against the establishment.

You have a neighbouring Islamic country whose government you don’t seem to like much. You would appreciate if its rulers changed. The United States of America shares the same opinion as you. They want you to help settle a few scores of their own.

You collect motivated youth from around the world, all aligned in a certain sectarian direction. You provide them with military know how, modern weapons and defence strategies, in your own backyard. You send them charging to your neighbour, hoping that these motivated proxies will overthrow their government for you. While doing all this, you never calculate the cost of failure and any calamity that it might bring.

Russia is not happy with your involvement in this affair and invades your air space. You promptly shoot down its military plane. Terrorists take advantage of your lax policies towards religious activism and attack you at places you least expected. You hope that this is just an isolated incident. But with the passage of time, the intensity of these attacks keeps increasing.

They attack your airports, your weddings, your funerals and your public places. This is the story of Turkey in 2016, but if you take a look at newspapers from Pakistan during Ziaul Haq’s regime, you will find uncanny similarities and realise these words are equally applicable to Pakistan. The attack that took place in Istanbul on New Year’s Eve is a replica of the Taliban attack on a volleyball game in Bannu, exactly seven years ago. The explosion at the Gaziantep wedding is similar to the carnage on a bus carrying wedding guests in the Mohmand tribal region.

The attack on the Istanbul airport is a déjà vu moment for those who know of the Karachi airport attack in 2014. Despite how far apart we are on the map, if you look closely you’ll spot many similarities between what Turkey has become under Recep Tayyip Erdogan, and how Pakistan had changed under General Ziaul Haq’s rule.

Can Turkey learn from our mistakes and have a soul searching moment of its own?

The similarities are there, if you look closely.

Both General Zia and Erdogan reflect a conservative mind-set. The 1970s, before Zia came into power, was one of the most liberal times in our national history. Zia felt beleaguered by a minority that had changed the outlook of a conservative society deeply rooted in Islamic principles. Erdogan perhaps feels the same.

Army and judiciary might be secular but a majority of the middle class, especially in the rural areas, is religious and does not identify with the principles of an elite minority. Despite being in power at differing times, both eventually concluded that a change of course was needed to bring back some balance in the society. The revival of the pulpit and the glory of sermons needed to be reaffirmed.

Both General Zia and Erdogan had domestic disturbances to contend with. Ziaul Haq dealt with a popular movement known as MRD (the Movement for the Restoration of Democracy) headed by democracy stalwarts, urging the public to overthrow his government. At that time, Pakistan Peoples Party was a real grass root party, and there were many others among the political centre who were looking for a democratic solution for Pakistan. General Zia knew that the only way to resolve the issue at hand was by diverting the public’s attention towards a new cause.

Islamic jihad was a tranquilliser injected into the veins of a nation hungry for purpose. Books, newspapers, television programs, public forums were all fine–tuned to churn out a unified message of a big bear knocking at our doorsteps. The fear of any external enemy is a great unifier and Erdogan did the same thing. Even before the military coup, Erdogan had a very active secular opposition vouching against him and it was only the pulsing heart of the religious fundamentalists who could cure such a malaise. Erdogan’s overtures to Islamic fundamentalists were thus a balancing stone to gain a loyal following. It was a move that did pay him off during the ill attempted coup when his supporters threw themselves against military tanks to restore him as the president.

Both General Zia and Erdogan dreamed of a greater role for their countries. Pakistan was declared a citadel of Islam and, as a corollary, it was agreed that the world must be scared of the only Islamic country in possession of nuclear power. The Afghan invaders from the past, specifically Ghaznavi and Ghori, were ideal Muslim heroes, a pan Islamism transcending ethnic divides between the conquerors and the conquered.

For Turkey, there is a greater historical context. It used to be a super power and, up till a century ago, it was the lone khilafat (Caliphate) in the whole Islamic world. The memory of Suleiman, the magnificent, might not be such a subdued part of Erdogan’s musings and his involvement from Flotilla to Ikhwan is a testimony of the same aspirations that General Zia once had.

During General Zia’s time, it was Afghanistan which had a rogue government. We felt an existential threat by the presence of a superpower in our neighbourhoods. We allowed the Jihadi schools and recruitment centres, often with state patronage, to flourish. A young Jihadist would first get brainwashed in a Pakistani madrassa and then go on to neighbouring Afghanistan to get the necessary training.

The truth became apparent after 9/11 when these disgruntled elements launched a backlash against the state itself. Turkey found its nemesis in neighbouring Syria. There are indications that a similar story might be unfolding in Turkey as well.

A few years ago, University of Columbia’s program on Peace-building and Rights assembled a team of prominent international experts on terrorism. The team took its inference from various sources of news on this issue including prominent newspapers and on ground sources. The results of the effort were summarised in an article by David L Phillips the Director of the program in The Huffington Post titled Research Paper: ISIS-Turkey Links.

The research paper examined in details what the nature of these allegations is and what evidence seems to support that:

1. At the height of insurgency, a majority of ISIS fighters cross the border via Turkey through a patch labelled ‘Gateway to Jihad’ as a few Turkish border soldiers turn a blind eye toward them.

6. Turkey turned a blind eye to the rampant radicalisation of the state.

Denied by the Erdogan government, these allegations serve as a trail of how Turkey used proxy war in a neighbouring country as a policy tool.

Anyone familiar with Pakistan’s own record on Afghan issues, especially those familiar with works of prominent writers, such as Ahmed Rashid, Amir Mir and Saleem Shehzad and Ayaz Amir, will find it all too familiar a story. In our hatred for the enemy, we both introduced piranhas in our aquatic ecosystem, hoping they will target a particular brand of fish only. We believed that these fighters were good, and that they would only fight the bad guys. We never paid any heed to the indicators suggesting that not all of them are good, and that perhaps they are the ones responsible for the sectarian carnage in our own backyard.

General Zia and Erdogan both came into power after a coup against the establishment. Both strengthened their control over the government by employing similar tactics: oppressing freedom of expression, arresting and torturing political opponents, controlling educational and religious institutes and harnessing the tides of global politics for their own benefit. They also suppressed several hidden and some open rebellions.

Erdogan seems to slowly be turning back on this policy, but is this genuine effort toward bringing some sense into Turkey’s policies or is it one more gimmick?

General Zia wasn’t alive to see how his tyrannical policies brought about havoc. But if he had, would he have repented too? It’s hard to tell.

One thing is for sure; there is much that separates us in our demographics and geography, but there is a lot that makes us relate to one another in our failures.

One of the most ironic lessons we have learnt from history is that we have never learnt from it. These attacks on Turkey are a replica of the same failed policy that Pakistan had adopted in the 1980s. You pick bits and pieces from the most putrid of corpses around the world, you mix and match them, drive that magical spark of religious fervour through them, send them to the most ideal of targets and hope that they will do the job for you.

The problem with such monsters is that no matter how far you have left them behind, they have a way of tracing back their steps. There is always this Freudian obsession, that father of all Oedipus complexes that makes them challenge the very hand that created them. You can always guarantee a backlash when these monsters don’t get what they believe is their due right. Perhaps the greatest truth of current times is that modern proxy revolutions eat not only their only children, but the children of those who financed them.

The author is an entrepreneur, photographer, travel enthusiast and amateur writer. He writes on society, politics and things that trouble ordinary mortals. He tweets @Faded_Greens (twitter.com/Faded_Greens)

Hello, I am an Iftarholic and I have a few confessions to make