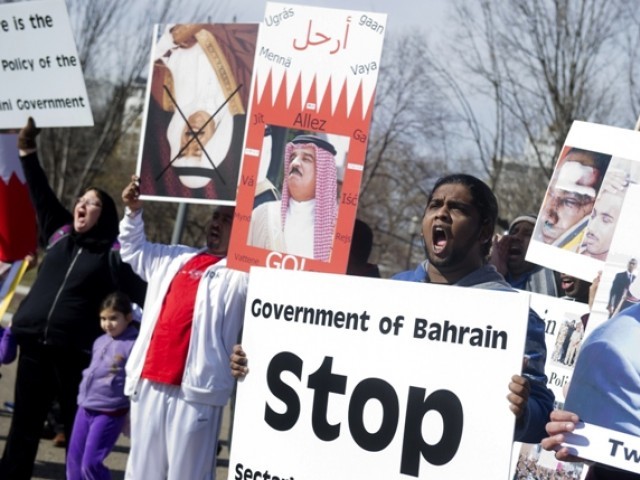 Mubarak’s exit was the start of the revolution, not the end.

Egyptian protestors gathered after Friday prayers last week, to remind the military that it is them (the people) who had brought down the Mubarak regime. Even though they may have vacated Tahrir Square, the message was that they would not settle for anything less than their original demands.

Commentators have attempted to establish whether similar conditions exist in Pakistan for a revolution, drawing parallels and identifying differences.

But if comparisons must be drawn then the the ongoing protests in Bahrain are perhaps of greater relevance for Pakistan than events in Egypt.

What Bahrain learned from Egypt

The Egyptian and Tunisian revolution has lifted the most powerful tool that authoritarian regimes employ to pacify citizens – fear. With people no longer afraid, other capitals in the region like Manama are witnessing protests.

Inspired by events in Cairo, the protestors congregated at Pearl Square. Similar to the Cairo protests, the people emphasised peaceful dissent.

The protestors are demanding greater political representation, an end to state-sanctioned discrimination against the Shia majority and the removal of the Bahraini Prime Minister Shaikh Khalifa Bin Salman alKhalifa.

Why Bahrain is important for Pakistan

What makes events in Bahrain relevant to Pakistan is the sectarian divide in the country.

The Sunni minority in Bahrain has monopolised power while the Shia majority is systematically marginalised from public influence and control. With Saudi Arabia’s support, the Shia population has been systematically oppressed, as the fear of Iranian influence in Bahrain is considered a strategic liability.

Bahraini security forces recruit from across the region. Pakistanis, particularly from Balochistan along the Makran coast, are favoured recruits.

These Pakistanis are viewed as instruments of state oppression by the protestors. If the Bahraini regime were to fall, Pakistan as a willing supplier, nay ‘facilitator’ of Bahraini recruitment will not be viewed favourably by a new set of leaders.

As the protestors are considered to be predominately Shia, it was with brutal efficiency that at 3:15 in the morning, the police and national guard raided the protestors’ camp as they slept.

Live rounds and tear gas canisters were employed to clear the square, while some witnesses have claimed that young protestors were handcuffed and executed at point blank range. Ambulances were obstructed and doctors beaten for treating injured protestors.

Given the sectarian nature of the revolt, Saudi Arabia is aggressively supporting the King of Bahrain. It has placed the Saudi army on standby to cross the causeway into Bahrain to intervene if required.

The Shia community in Eastern Saudi Arabia, which considers the Bahraini protesters their brethren, may protest as well. A brutal suppression of protestors, if given a sectarian colour will not only intensify Saudi overt and covert support for anti-Shia organisations, but may also invite Iranian backing for the protests.

Pakistan itself is no stranger to sectarian violence, which has intensified in recent years. If the Bahraini regime falls as the Saudis and American’s fear, it would be seen as and portrayed by Iran as a victory of her interests. This would push the Saudis to intensify support for organisations that share it’s goals of containing Iran.

Such support for organisations in Pakistan, could lead to sectarian attacks and reprisals.

The Egyptian and Tunisian revolt are celebrated for their emphasis on inclusivity of a range of social, economic and religious groups. The Bahraini protests are divisive and sectarian. It may inflame the already fragile relationship between Saudi Arabia and Iran while Pakistan is unlikely to be left unscathed.