After #PakvsAus, it is time for Misbahul Haq to retire 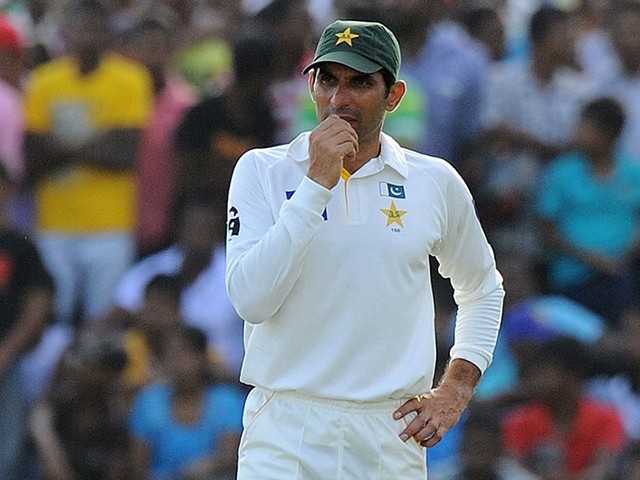 Sooner or later, Misbah has to make a decision regarding his retirement and, by the look of things, the time has come. PHOTO: AFP

If there is anyone who can be proclaimed as one of the greatest servants of Pakistan cricket at the drop of a hat, it is Misbahul Haq. It is crystal clear to a rational cricket follower that Misbah deserves a lot of praise for where Pakistan cricket stands right now.

Misbah came under the spotlight during his Test debut against New Zealand at Auckland back in 2001, but it was a clerk’s room where he was offered the captaincy band in 2010, which was the actual turning point of his career. Misbah was asked to take command of the team at a time when Pakistan cricket was in utter turmoil due to the infamous spot-fixing scandal.

Misbah’s calming influence on the side was just what the doctor ordered for a team which was in complete disarray after losing three of its best players due to spot-fixing.

The scandalous turn of events in 2009 was a blow to Pakistan cricket. Misbah’s induction turned out to be a blessing in disguise as Pakistan cricket never looked back from that point onwards. In a span of six years, Misbah and his men reached the summit in Test cricket, which is a feat no other Pakistan team has been able to achieve.

Misbah combined his acute leadership skills with the personality he possessed to carve out a recipe which was best suited for Pakistan cricket at a time when our cricket was in dire need of some stability. Whether it would be on the field or off the field, Misbah ensured that the team moved along as a well-knit unit despite the numerous occasions when the odds were stacked against his team.

On the field, Misbah’s canny ability to gauge the skill set of the players at his disposal helped him utilise them in the best possible fashion and extract the desired results. Another great attribute of Misbah’s captaincy is his proactive attitude, as compared to adopting a reactive approach which is so important considering the dynamics of modern day cricket. This approach is particularly vital because it restricts the opposition from dictating terms during the course of a cricket match.

During the past few years, Pakistan has been successful at keeping a lid on the off-the-field controversies which impacted our cricket team back in the day. Misbah’s influence on the side has disabled the menace of grouping within the team to a large extent, resulting in a well-gelled outfit taking form – a sign that the team is moving in the right direction.

Under his inspirational leadership, Pakistan proved their cricketing credentials in a formidable manner. Be it the historic whitewash of England in 2012 at a time when their opponents were ranked as the number one Test side or a famous ODI series win against South Africa on the backyard of the Proteas in 2013. The recent drawn Test series against England (away from home ground) was another instance of Pakistan’s race towards the top.

The sudden plunge in Pakistan’s Test match form, which has seen them lose five matches on the bounce, has raised questions about whether it’s time for Misbah to call it a day and hand over the reins to someone else. The skipper’s form has also been declining, his highest score in past six Test outings is only 31, which is why he might be better off bringing down the curtain on his career after the conclusion of the Sydney Test.

Sooner or later, Misbah has to make a decision regarding his retirement and, by the look of things, the time has come.