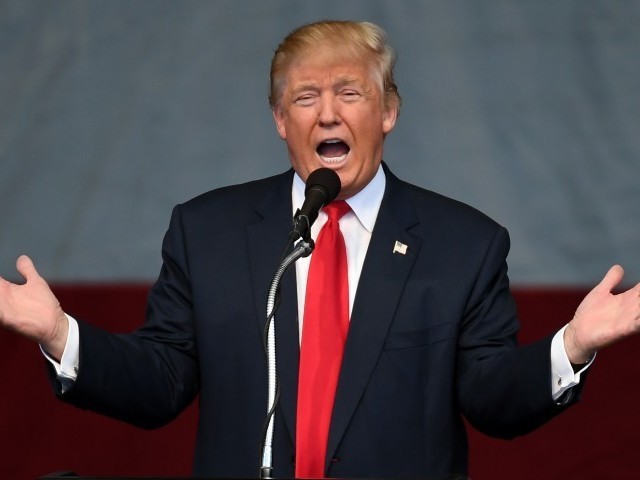 Trump’s candour about radical Islam is refreshingly honest and his perspective mirrors that of the most powerful Muslim leaders today. PHOTO: AFP.

As President-elect Donald Trump’s Cabinet takes shape, critics charge that his administration would be the most anti-Muslim and anti-Iranian. Meanwhile, in Europe, Islamist terrorism continues to escalate: the assassination of Russia’s ambassador by a Turkish man who pledged allegiance to jihad in Arabic during the killing in Ankara, Turkey; a deadly attack at a Berlin Christmas market and the shootings targeting a Muslim prayer centre in Zurich.

This is Islamism at work — the indiscriminate targeting of civilians to paralyse secular liberal democracies. As an observant Muslim woman who repudiates Islamism, I believe the Trump administration, rather than being anti-Muslim, will come to be seen as defender of Muslims, and Trump, the Dwight D Eisenhower of our era.

Many Americans fear the escalation of Muslim xenophobia under a Trump administration, warning of a new McCarthyism against those who practice Islam. Yet in the Middle East, many Muslims see Trump as a sign of US engagement in a Muslim world jaded by an Obama administration remarkable for its disengagement. For Muslims who are sustaining huge losses at the hands Islamist terrorists, Trump’s aggressive anti-radical Islam stance is long overdue.

The Obama administration’s philosophy was dubbed by critics as “willful blindness”. Recall an America unmoved by Iran’s aborted Velvet revolution in 2009, America’s impotent bystander status during the Arab Spring, America’s hasty engagement (and embarrassed disengagement) with Mohammed Morsi’s Muslim Brotherhood in Egypt. These examples reveal a profound inability by the United States to distinguish Islam from Islamism.

American paralysis only deepened as the Islamic State terror group gathered power and territory. Our passivity ripened against a background of disinterest in the Israeli-Palestinian conflict. We exhibited unremitting American apathy toward Bashar Assad’s war on the Syrian people, as Russia expanded its influence. And yet, America pursued an Iranian nuclear deal.

The consequences were predictable.

Saudi Arabia was shunned despite the enormous domestic risks it has undertaken as a US ally. Since 9/11, Saudi Arabia has confronted home-grown Islamist terrorism, pursued a hardened stance against ISIS domestically and in Syria, muzzled its religious clerics, and defanged its morality police. Fears of domestic Islamists drive the kingdom to finance rebels combating ISIS in Syria. These fears can be leveraged by the Trump administration to seal the spigot of petrochemical dollars into global madrassas that indoctrinate so many of the world’s violent Islamists.

Yet every ominous cloud has its silver lining.

Saudi Arabia’s contentious rivalry with Iran and its proxy war with Iran that is unfolding in Yemen align its national security interests with those of Israel. Saudi Arabia and Israel both are embroiled in combating ISIS and the existential spectre of Iranian hegemony. Both nations have begun open engagement; a Saudi delegation even visited Jerusalem this year.

In these times of crisis, Trump’s candour about radical Islam is refreshingly honest and his perspective mirrors that of the most powerful Muslim leaders today.

Events in Berlin and Ankara will only underline the Muslim world’s resolve.

Like Eisenhower, Trump will be at the right place, at the right time, in the right history. Trump will do battle with Islamism at a time when a disparate Muslim world is finally unifying with enormous political will to join that effort. That will inspire a deepening resolve in the west, and must not be squandered.

Trump can start by outlawing the Muslim Brotherhood, as President Sisi did in Egypt. He must designate it a foreign terrorist organisation and acknowledge that it is at the very least an indicator of extremism. Then, he must follow the money.

If Islamism is to be exposed in America, forensic financial investigations must scrutinise all institutions where Islamism can flourish without scrutiny — mosques, charities, and advocacy groups. There can be no exceptions. Trump must empower our enforcement agencies with necessary surveillance methods targeting Islamists — sympathising behaviours, whether of individuals, or organisations. Muslim governments in Saudi Arabia, Pakistan and elsewhere are deploying such methods, including the use of security forces, tracking of SIM cards, and national identification categorised by religion, to expose and dismantle Islamism in their own nations.

If Trump and his administration follow through, the United States will reassure the Muslim world at large that America stands by us, and indeed, will lead the way for pluralist Muslims to defeat Islamism.

While the costs will be high, the gains are also enormous. If Trump succeeds, he is poised to become an Eisenhower to the world’s beleaguered Muslims, while restoring America’s moral authority to its rightful place — as a force for good which vanquished an evil we once knew as Islamism.