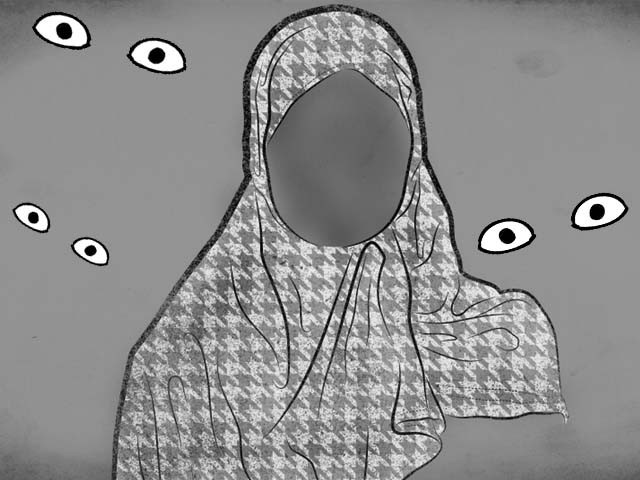 Some would wink, others would give flying kisses.

Writing this letter was hard. I didn’t even know where to start. I guess my life and this letter are quite similar in this regard. I know what some of you might be thinking – “what is this girl blabbering on about, and why are we even reading this?” – but it’s important for me to explain to you and make you understand where I’m coming from. I need to salvage the last bit of hope I have remaining.

You don’t know me personally but I am a Pakistani hijabi. I have two of the most deplored identities in the world; one was written by fate while the other I took up willingly. You must be wondering what in the world could convince me to wear a piece of cloth that would inevitably invite criticism, anger, hostility, harassment and, be that as it may, pogrom.

I know what the world accuses me of. And believe me when I say that I do not blame them for this. I admit that we, the hijabi women and bearded men, do bear resemblance to the individuals who have been causing anguish and agony to humanity since the end of the 20th century. You will obviously look at me with suspicion because I am not visibly different from those who have authored incidents like 9/11, the July 2005 London bombings, the November 2015 Paris attacks, and the 2016 Orlando nightclub shooting. Believe me, it’s completely understandable.

All I am asking for is a chance to tell you why I, and a million other girls, chose to cover our heads with headscarves. So please bear with me.

I was not wrapped in a scarf as soon as I was born. In fact, I didn’t wear one for almost two decades of my life. There were certain events that played out into my decision. Who wouldn’t love to swing their hair back and forth and show off their long locks? Who wouldn’t want to try the latest hairstyle or hair colour trend? Who would want to sweat profusely during a hot summer day? No one, because I didn’t want to do it myself either. It was very difficult for me to get accustomed to the itchy feeling, the suffocating adornment, the deprivation of feeling a breeze on the nape of my neck, and the absence of compliments about my hair. But I moved past it. I managed to accept my realties, as I had made a choice. And I was going to stick to it.

I have been  harassed countless times, in my own country. By my own countrymen. Yes, the Islamic Republic of Pakistan is not as Islamic as you think. It’s almost ingrained in the people here to opine over every issue – you will be called a w****e if you choose to wear a sleeveless or backless shirt. Unfortunately, it doesn’t stop there; you are never spared, even if you decide to cover yourself from head to toe, because in that case, you’ll be labelled an extremist. I have been pestered by my driver, my qari sahib (a holy man who is supposed to teach young children how to recite the Holy Quran but never actually makes you understand what it is that you’re learning or what it means), teachers, policemen, passers-by, hooligans, and colleagues. Some would wink, others would blow kisses. But it never stops.

I remember when I was five-years-old and my mother wrapped my head and chest with her dupatta, handed me the Holy Quran, and took me to the drawing room where my qari sahib was waiting. I sat on the sofa next to his and opened the surah I had to recite that day. As soon as my mother left, he asked me to shift to his sofa. I was only a child back then, and his friendly tone and well-disposed smile made me agree. While I read the verses, he caressed my back and placed his hand on my left shoulder. For me, it was a sign of affection that adults showed towards children when they did something good. However, later on, that hand went from my shoulder to my thigh.

One day, I found my father sitting with the qari sahib when I entered the room. The first sign that showed that something was wrong was when papa saw me shake hands with him and said,

“Why are you shaking hands with him, Aminah?”

“He asks me to do so every day,” I replied innocently.

Qari sahib’s face went from pale to a bright red.

I went on about my usual routine and sat in my spot next to him on the sofa. That, however, was the last straw. My father, furious by my actions, said,

“Aminah, go to your Mama. Give her the Quran and complete your homework.”

That was the last time I saw him. And by that I mean my parents eventually gained enough courage and trust to hire another one. And in turn, gave another man a chance to harass me at an age when I did not even understand the meaning of that word. Till today, I can’t even imagine the thoughts that must have gone through his mind as he fondled my thigh every single day, as I sat there, with my hands clutching the Holy Quran.

I have been through it all – from a stranger fondling my thigh to a policeman asking me to sit in his van, from a teacher asking me to sleep with him, to several colleagues asking me for undue favours – I have faced a lot. I wanted to conceal my sexuality, the only tool people think I have. I am a feminist and therefore, I firmly believe in gender equality. But I cannot deny being awarded for my sexuality. I don’t know how to formally play the woman card; it is as if you reap the benefits without ever having to swipe it.

I know extra clothing does not and cannot stop ogling men from looking at me with lustful eyes, but what else would I have done? The eyes would haunt me. The way they stared at my not-so-big breasts and dark brown hair, the way everything began revolving around my sexuality and not my qualifications; I couldn’t take it. I wanted to do everything in my power to prevent it. I could have reported my harassers, I could have spoken up but I knew that the octave of my voice would be silenced by the patriarchy that reign my country and my gender. I live in a place where conviction is only a dream for the victims and female harassment in police stations is an open secret. Therefore, I started swathing myself with the hijab.

I remember this one incident from a while back when one of my marriage proposals had come over to see me. I looked at myself in the mirror, fixed my scarf, touched up my make-up and went straight to the kitchen. My maid handed me a tray with a range of soft drinks and lemonade for our honourable guests to choose from. I carried the tray into the lounge, where my parents were sitting with my in-laws-to-be. I walked around the room, offering everyone a drink. My soon-to-be mother-in-law eyed me carefully, observing the way I walked, the way I offered the drinks, the same way a buyer analyses a sacrificial goat before Eidul Azha. Having done my duty, I elegantly marched towards the kitchen to ‘arrange dinner’. But in reality, I stood outside the room to eavesdrop on their conversation.

“Aminah was not wearing a hijab in the photograph you had shown us earlier,” the suitor’s mother said. In her statement, there lay a hidden question that I dreaded.

“Yes, that was an old picture of hers. I had no other photographs at that time, as she had gone to Islamabad for a debate competition,” explained my mother.

“An old picture? Does it mean she now wears the hijab all the time?” asked the inquisitive lady.

“I am afraid so. It’s her belief. We neither asked her to wear it, nor do we discourage her from wearing it. There is no harm in covering up,” my mother replied.

“You are right but nowadays such youngsters are more prone to becoming extremists in their views. I mean, she is only 24! She can do this later on in life. She should enjoy her life in these youthful years.”

“Surprisingly, offering prayers and fasting regularly along with wearing the hijab does not make her dull at all. She is into drama, sports, and debates, and has also managed to top her class at her university,” my mother proudly informed her.

That was one of the last words we heard from them. From then on out, my mother began looking for suitors who would accept me for my hijab.

I know many of you are sceptical about my appearance, but believe me when I say I’ve always wanted to resemble the pious Mary. The difference is that Jesus testified to her chastity, while here I am, still fearing for my life, still afraid of being assaulted for wearing a headscarf that I wore to protect myself.

One of my friends, Urwa, was recently a victim of Islamophobia in France. She was not wearing a burqa or hijab; she merely covered her hair with a kerchief that was lightly tied behind her neck. Apart from this, she was wearing a short shirt and a pair of skinny jeans to work. On her way to the subway station, a man started following her. But since she had her headphones on and was listening to music, she could only see him shouting at her but couldn’t hear him. Because it had been a long walk and she had not responded to a single abuse that he was hurling at her, the man decided to move to physical tactics. Just when she began walking down the stairs, the man kicked her in the back and hurled a glass bottle towards her which hit her on her head as she rolled down the stairs. Blood was dripping from her forehead by the time she reached the last step. As she tried to get up, she saw him standing there, shouting,

When she told her mother about the incident, she made Urwa take off her hijab as it seemed like the only solution to the problem, besides leaving the country once and for all.

I’m not asking you to blindly believe us when we say that Islam is the religion of peace because so far, we have not done anything peaceful for humanity. But it’s a humble request from a Muslim girl confronting discrimination in her country, one who fears to face the same discrimination abroad –give us a chance. Let us co-exist with you. The same way I have not blamed all of you for what a small minority has done to hijabis, I plead for not being damned for something I haven’t done. Give me a chance to prove myself innocent before you declare me guilty. Is that too much to ask for?