Why is Pakistan so quick to speak about nukes, Khawaja Asif? 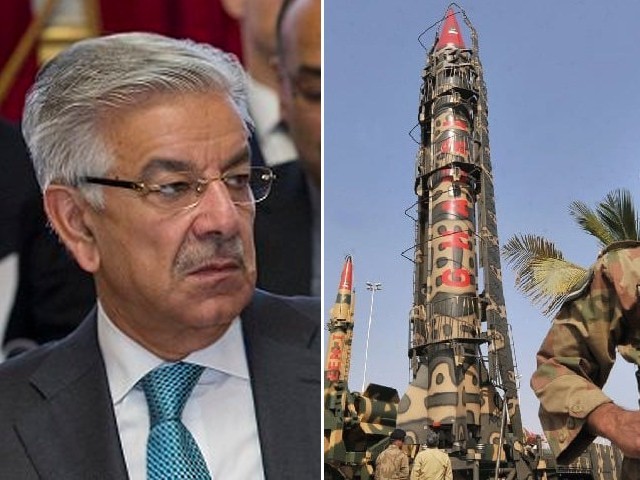 Does he, like other members of the government, not get briefed by security agencies?

Sitting in his jail cell secretly armed with a cellular phone, a British mobile SIM, and the contact details of world leaders, a murderous psychotic terrorist, in the hopes of killing countless, sat plotting nuclear war. His plans were so ludicrous that you’d think this was a work of fiction straight out of a bad spy novel, but I assure you that this incident was frighteningly real.

First, he called a nuclear-powered nation itching to retaliate to fresh terrorist attacks on its soil, pretending to be the head of state of a nation whose countrymen were allegedly responsible for the attack. Attempting to call the foreign minister, he was unable to get through the security protocols, and gave up after being promised a return call. Next, he called the secretary of state of the most powerful nation of the world, but was once again unable to pass the security of checks.

Finally, he tried his luck calling the president of the country that stood nervously accused of orchestrating a terrorist attack on its neighbours, and wouldn’t you know it, he got through to former president, Asif Ali Zardari.

Yes, it would be amusing if it weren’t so pitiful that according to reports, while sitting in his Hyderabad jail, British terrorist Omar Saeed Sheikh, linked to organisations such as Taliban, al Qaeda and others, convicted for the brutal kidnapping and murder of Wall Street Journal reporter, Daniel Pearl, was unable to get through to Indian Foreign Minister Pranab Mukherjee or American Secretary of State Condoleezza Rice, yet had a conversation with the president of Pakistan.

And not only did he have a conversation, he also managed to convince the Pakistani leader that he was the Indian foreign minister threatening him with dire consequences. Here, the Pakistani leadership went into panic mode. What followed were phone calls between Zardari, former Prime Minister Yousaf Raza Gilani, Interior Minister Rehman Malik, and eventually, between General Ashfaq Parvez Kayani and the Inter-Services Intelligence (ISI) Chief Lieutenant-General Ahmed Shuja Pasha.

Eventually, cooler heads prevailed and the call was traced to Hyderabad, but for some time, the hoax calls drove India and Pakistan to brink of war.

Unfortunately, it doesn’t seem like a change in administration has helped Pakistan. A few days ago, Pakistan once again became the laughing stock of the world, making headlines in India, Israel, the United States, and more, when Defense Minister Khawaja Muhammad Asif read a piece of fake news and responded to it in his official status on Twitter by threatening Israel with nuclear weapons.

reports referred to by the Pakistani Def Min are entirely false

Perhaps, if Asif was the minister of agriculture or minister of sports, his mistake could be forgiven, but for a defense minister to threaten another nation with nuclear power over a piece of fake news is unforgivable.

Where was our defense minister’s intelligence? Does he, like other members of the government, not get briefed by security agencies? Does he do his job based on what he reads on social media?

Also, why is Pakistan so quick to speak of nuclear weapons, like the stupid unemployed man who can’t feed his family or support himself, but boasts about how well-endowed he is? Our literacy rates are low, unemployment rates are high, our government is corrupt and consisting of unofficial citizens from Panama. We can’t protect our women, children, or minorities, yet we can surely bomb your country to regress to our levels.

We are so quick to mock Donald Trump even though we have a Trump on every street corner. No wonder Trump said “he loves Pakistan” in that viral video. After all, he has plenty in common with our own leadership.