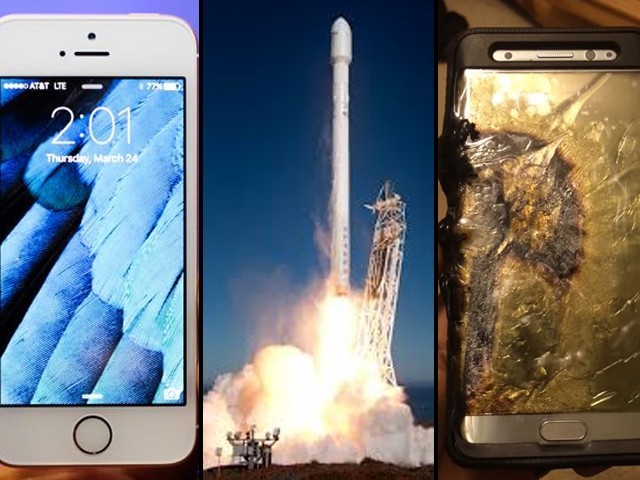 This year we saw some major technology flaws from different companies.

But is this famous quote fit for tech giants like Apple, Samsung, SpaceX, etc?

2016 is ending with many new gadgets, smartphones and other tech innovations. But this year, we saw some major technology flaws and failures from different companies. So let’s take a look at some of them.

Facebook’s dream was broken into pieces when on September 1,2016, the Elon Musk’s SpaceX Falcon 9 rocket exploded on the launch pad during a test launch at Cape Canaveral.

This video is nuts: Moment of #SpaceX explosion at Cape Canaveral. pic.twitter.com/Vu6aLF3YYs

This rocket was set to launch on September 3, 2016, and was meant to provide high speed internet to large parts of Sub-Saharan Africa. This was also an initiative by Internet.org to connect to the world.

Here is what Mark Zuckerberg said on incident:

According to Founder of Electric cars Tesla Motors and SpaceX, Elon Musk, it was the worst failure they ever witnessed in 14 years.

Still working on the Falcon fireball investigation. Turning out to be the most difficult and complex failure we have ever had in 14 years.

You must have heard the term smartphones, telephones and mobile phones, but you’ve probably never heard of a bomb phone before. The Korean Company, Samsung, released its Note 7 this year to enhance its Note series, but who knew that this enhancement would go wrong and badly affect this Korean giant’s reputation in the smartphone industry. Note 7s were observed to easily overheat and even explode.

After getting complaints from their users, the company has recalled all Samsung Note 7s.The company said it “conducted a thorough investigation and found a battery cell issue”.

“I would at any cost find the exact cause to restore the trust of consumers so that they can use Samsung products without any safety concerns.”

Is it the end of Samsung?

It seems like Samsung just can’t catch a break this year. Samsung had to recall nearly three million washing machines due to explosion fears. The exploding machines reportedly caused nine injuries, including a broken jaw, and are occurring due to excessive vibration.

The recall was followed by a lawsuit filed by two of its consumers as the washing machines were “defectively designed and imposed an unreasonable risk to person and property”.

According to one of the consumers,

“There is no reasonable or acceptable rate for washing machines to explode. Michelle’s washing machine exploded with such ferocity that it penetrated the interior wall of her garage, where it was located. The dent left at the washing machine’s point of impact was so deep that it pushed through into Michelle’s living room, which shares a wall with her garage.”

Fake news and content over the internet was one of the biggest failures of social sites Facebook, Twitter and Google. Many experts believe that during the US presidential election campaign, social sites failed to manage or filter fake content on their sites and thus, fake news influenced the voters.

But according to Mark Zuckerberg,

Online harassment and hate speech is a dominant issue on mainstream social media platforms and rose during the election campaign as supporters of Hilary Clinton and Donald Trump began to rile up against one another. As artificial intelligence and coding techniques improve day by day, social media sites have to take serious action on content management, else it can affect the users’ sense of safety and trust.

If you’re an iPhone user that faced this issue, then you probably know what I’m talking about. Whenever there is an iOS update, you will find iPhone users asking and discussing whether they should update their software or not on various forums. Apple’s iOS 10 remains under serious questions since the day it was launched. Some of the iOS 10.1 users lost their health data. Many users reported to Apple about the issue, because of which Apple rushed to fix this bug and released iOS 10.1.1.

But who knew that this would raise even more issues.

The most serious issue with the 10.1.1 version is its battery draining issues. Users have reported that their battery levels suddenly drop to 1% whenever it nears 30% and then shutdowns in a second. What is even stranger is that when users reboot their phone after plugging it into a charger, the battery levels reflect that it is currently at 30%. Different users shared similar experiences on Apple’s official community. According to some users, this bug has gotten even worse with the current iOS 10.2 update.

Many thought that Samsung recalling its Note 7 series would be Apple’s golden opportunity to cement its reputation as the leading smartphone manufacturer of 2016 with the recently launched iPhone 7 and iPhone 7 Plus.

That narrative quickly changed when a man suffered third-degree burns on his thigh after his iPhone 6 exploded in his pocket, or when an iPhone 7 user’s car was burnt from the inside after he left his phone in the car while he went for a swim at the beach in Australia,  or even when an iPhone 7 Plus exploded in China’s Yunnan province after it fell on the ground.

It seems like Samsung is not the only manufacturer struggling with exploding smartphones.

Let’s hope that the aforementioned tech giants learn a little from 2016 and work on making their gadgets more durable, sustainable and innocuous in 2017.