Is the killing of Rohingya ‘ethnic cleansing’ or Muslim genocide? 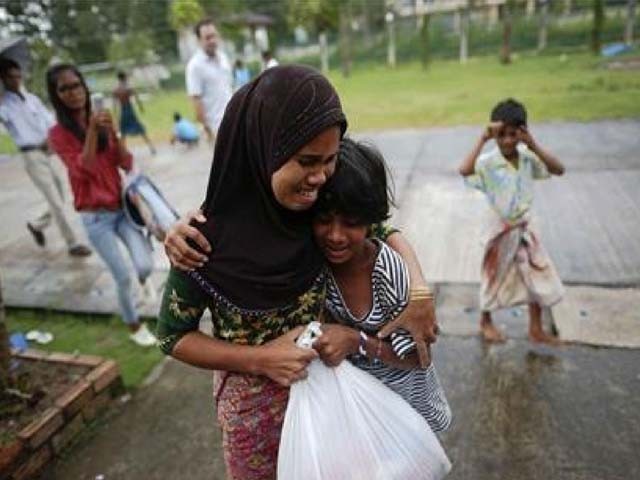 Narunisa, a 25-year-old Rohingya More than 150,000 people who usually receive life-saving assistance have not received any food or medical aid for more than six weeks. PHOTO: REUTERS.

A campaign of ethnic cleansing against the Rohingya Muslims is being carried out by Burmese authorities in the western state of Arakan. The Burmese troops have slaughtered children, raped women, as well as killed and shot men. They have burned and looted houses. They have forced people to cross the river into Bangladesh, which is one of Burma’s neighbouring countries.

The Rohingya group, numbering about 1.1 million people, is seen as one of the world’s most persecuted minorities. A huge number of people from the community have poured across the border for several years to seek asylum in one of the refugee camps near Cox’s Bazar.

Moreover, the Rohingya are denied citizenship in Burma, officially known as Myanmar, and are viewed by many as illegal immigrants from Bangladesh, where they are also not accepted.

In resistance to international law, the Bangladeshi government has begun to forcibly repatriate the asylum seekers by the thousands. The United Nations High Commissioner for Refugees (UNHCR) has declared that the ‘cleansing’ of Muslims are acts of crimes against humanity.

Crimes against humanity, under international law, are crimes that are committed as part of a systematic attack on a civilian population. The attack itself must be against a specific population and part of a state or organisational policy. Non-state organisations, which can include religious bodies and political parties, can be responsible for crimes against humanity if they have a sufficient degree of organisation. Furthermore, Amnesty International and UNHCR have accused the Burmese government of ‘collective punishment’ as the Burmese military carries out counterterrorism operations in the conflict-torn state.

The Burmese government has failed majorly to act on the recommendations made in a report by the Office of UNHCR, which stated that the pattern of violations against the Rohingya may amount to crimes against humanity.

“Genocide” is described in the Convention as any of five categories of enumerated acts committed with the intent and purpose to destroy a national, ethnical, racial, or religious group.

The enumerated acts are:

In order to establish that genocide has occurred, the elements of ‘group’, ‘act’ and ‘intent’ mentioned in the Convention must be proved.

Comprehensively speaking, Rohingya can be categorised as a group under the Genocide Convention, since they share a common history, culture, and language. In addition, they are viewed as a distinctive group by prosecutors and are targeted based on this identity.

Violent actions on part of the government and its passivity towards stopping the violence perpetrated locally fits the ‘act’ category of the Convention as well. Furthermore, instances of torture of the Rohingya constitute acts of serious mental and physical harm within the meaning of these definitions. Acts of sexual assault and rape by the NaSaKa, the Myanmar Army, and the Myanmar Police Force against Rohingya women also constitute acts of major harm to the mind and body; assault and rape cause mental instability and physical trauma.

Proof of ‘intent’ to commit genocide has been found by tribunals through evidences regarding a racist environment in public opinion, public speeches, and state policies and private. For example, since 2005, the government has allowed some Rohingya couples to obtain marriage licences only if they agree to have no more than two children. In fact, women in legal marriages who have more than two children, as well as those who have children out of wedlock, are subject to possible prison sentences of up to 10 years.

Many countries have shown condemnation of the current situation in Burma. For example, the US House of Representatives passed a resolution in 2014, urging the Burmese government to end the persecution of Rohingya Muslims. House Resolution 418 requests the Burmese government to respect internationally recognised human rights for all ethnic and religious minority groups within Burma.

In addition, Malaysia has recently spoken out against this ‘ethnic cleansing’ in order to bring peace and stability in Southeast Asia. Clearly, none of these efforts have had any significant impact. In fact, Malaysia even cancelled the national soccer team’s friendly under-22 matches with Myanmar in protest.

Despite gaining tremendous international attention, independent journalists and humanitarian aid workers have been denied entry into the area since the start of the lockdown. More than 150,000 people who usually receive life-saving assistance have not received any food or medical aid for more than six weeks. More than 3,000 children diagnosed with severe acute malnutrition have not received treatment and regretfully, as many as half of them are at serious risk of death. Save the Children has recorded the government’s failure to provide rations; on one day, it delivered 900 bags of rice instead of the 3,900 bags needed, with 12 bags half empty on arrival. The organisation reported that some Rohingya had resorted to eating glue.

The Rohingya Muslims in Myanmar’s Rakhine State have consistently suffered. Myanmar authorities, security forces, police, and local Rakhine actors have engaged in widespread violence, acts of torture, arbitrary detention, rape, and other crimes causing serious physical and mental harm. The conditions of the Rakhine State and the IDP camps are truly dreadful because the Rohingya lack freedom of movement, access to food, clean drinking water, sanitation, medical care, work opportunities and education. They live in conditions that seem to have been planned specifically to destroy the group altogether. The acts committed against the Rohingya, individually and collectively, proves the element of ‘act’ summed up by the Genocide Convention.

The situation for the Rakhine State’s residents is outrageous. A change is severely needed and it can be achieved, given that both sides demonstrate political will. Furthermore, voices that highlight the very reality of these tragic events happening in Rakhine State should not be silenced. If justice is to be provided, I believe that an unbiased investigation needs to be organised. However, the question still remains, how committed is the international community towards ending this genocide?

I sincerely hope that no more Muslims have to bleed to death because of their faith, anywhere in the world.