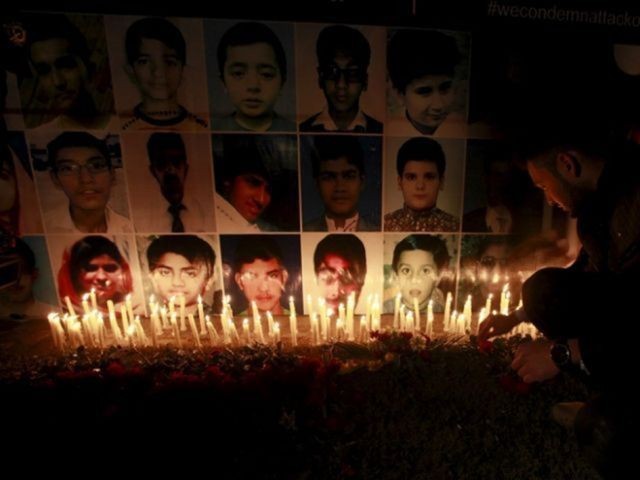 We need to remember the tragedy of APS as fervently as we commemorate any other important event in our country’s history. PHOTO: REUTERS

Tragedies unite nations, a lot more so than celebrations. Tragedies dissolve differences that divide us as we are emotionally forced to focus on one event rather than on each other. For the citizens of Pakistan, the Army Public School (APS) massacre of December 16, 2014 was that defining tragedy. As a nation, we had become numb or I dare say apathetic, to the killings of our fellow Pakistanis as long as we were not related to them.

The extensive target killing of minorities in Pakistan hardly brought a noticeable moment of sorrow for most. APS changed all that. The images and stories of children killed point-blank, made to watch the brutal execution of their teachers and friends who were riddled with bullets or set on fire, trying to find a place to hide from the monsters, the so-called ‘men of religion’ were harrowing.

We were all crying in unison that day – well almost all of us.

Tragedies like APS are similar to the great tragedies of human history. For the sake of our discussion, let us compare it to the tragedy of Karbala. The tragedy that befell the Prophet’s (pbuh) family on the desert plains of Karbala has echoed in the hearts and minds of men for almost 1,400 years. One cannot discuss the tragedy without being sorrowful at the plight of Imam Hussain (ra) and his family who stood bravely against the tyrant of his day. The forces of Yazid did not spare anyone, killing not only the men of Imam Hussain’s (ra) caravan, but also numerous children along the way.

Tragedies of Karbala and APS have a distinctive effect on the people who hear them – it divides nations into black and white, separating people into partisans of either side of the story. There are only two views on Karbala: the ones that hear the story and support the mission of Imam Hussain (ra) and those who openly or tacitly still support the dictators and conniving rulers of the time. Similarly, APS divided our society into two sections: the ones that cried at the death of our children and demanded Qisas against the partisans of the Taliban like Lal Masjid’s Abdul Aziz, who criminally condoned the incident. In instances like this, the supporters and lawyers of the killers are the same as the killers themselves.

How did we allow Abdul Aziz and his ilk to survive or rather thrive in our nation’s capital is beyond me. How can the Interior Ministry justify not arresting Aziz as was so eloquently put by Wusatullah Khan in his BBC Urdu piece Aisay tu Jhangir bhi nahi bika tha? These rulers are tacit or rather blatant supporters of this extremist trend once espoused by their benefactor and spiritual father General Zia.

If this is an allegation, then how was Masroor Nawaz Jhangvi; a known violator of the National Action Plan (NAP) rules and a sectarian hatemonger on the fourth schedule, allowed to contest by-elections in Jhang PP78.

Since when did this become acceptable? Were the courts, the Election Commission of Pakistan (ECP) and the government sleeping? Well if they were, they were deliberately sleeping. More shocking than this, is the outreach of the mainstream Jamiat Ulema e Islam-Fazl (JUI-F) to include this man onto their political roster after they admittedly helped him win.

The biggest religious problem in Pakistan is not Islam. It is the abject lack of Islamic awareness and education. Anything containing the words Islamic, Muslim, Islami, Ulema, Ummah, Ikhwan, Talib etc. is considered sacrosanct and untouchable. Therefore, if a man runs a mosque, he can go ahead and argue the killing of innocent children without fear of reprisal, because he knows that if he plays the ‘Islamic card’, nobody would dare touch him. How is this even remotely considered ‘Islamic’ in our society?

The Pakistani nation has failed its martyred children. Even before the second anniversary of APS, we have defiled the NAP and gone back to our apathetic slumber. The only parts of the NAP (or more aptly the No Action Plan) that we acted upon were the ones the military successfully concluded in Operation Zarb-e-Azb. We cannot and should not ask the military to clean up the religio-political mess in our cities as they already have too much on their plate. Certain quarters had expected General Raheel Sharif to do this, but he did what an honorable military man would do and moved on.

We need to remember the tragedy of APS as fervently as we commemorate any other important event in our country’s history. APS was the day when the supporters of our children were distinguishable from the supporters of the Taliban. We need to remember APS even more so now that this line is blurring and these sponsors are again working their way into our mainstream narrative. Terrorist attacks have gone down considerably and the battles seem won, but make no mistake about it – if we do not cull their sponsors and advocates, it’s only a matter of time that the ugly head of the serpent shall rise again.

My dear lost and martyred children, I remember you in my prayers. You woke this nation up from its dead sleep through your sacrifice. I pray we do not lose more children just to prevent us from falling back to sleep again.