Can Babar Azam prove to be Pakistan’s Virat Kohli in the near future? 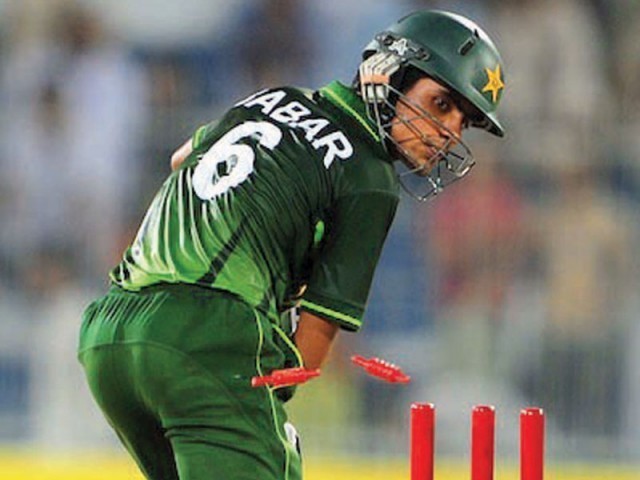 Babar Azam has been retained as captain for the mega event. PHOTO: AFP

Two stalwarts of Pakistan cricket, Misbahul Haq and Younis Khan, are about to retire from Test cricket. The cricket team is still struggling to find quality batsman who can fill in the enormous gaps left by these two star players. In this doom and gloom, young Babar Azam is a ray of hope for Pakistan cricket. Babar can prove to be a real asset for Pakistan, as he has the right technique and temperament for the game.

Babar was in Pakistan’s ODI Squad for more than a year and in his short career he has achieved feats and laurels that many people can only dream about. Babar played a few brilliant innings against England during the ODI series to save the faltering Pakistan team from complete disaster.

He is the third batsman in Pakistan (and eighth in the world) ODI history to score a century in every single match in a three match series. This is also the first time in his career that he has scored three hundred runs in successive innings. Babar needs 114 runs in two innings to surpass legend Sir Vivian Richards and become the fastest player to reach 1,000 runs in ODI.

It is safe to say that Babar has firmly established himself in ODI cricket and ever since his performance against West Indies, he is slowly but gradually establishing himself as a main stay of Pakistan batting.

He is slotted to bat at number three in Pakistan’s Test batting line up and so far it looks as though he’s adjusting quite well. He scored 90 runs in the first innings of the Hamilton Test in trying circumstances where even the senior players seemed to be failing. He further showcased his ability to handle pressure in the first Test of New Zealand series. Babar has undoubtedly proved himself as an asset during a state of crisis on numerous occasions and his performance was the only high point in an otherwise disappointing Test series against New Zealand.

Babar was on the horizon of Pakistan cricket since 2010 when he represented Pakistan in the U19 World Cup played in New Zealand in 2010. In this tournament, he scored 298 runs (which included a century) against West Indies in the first match, and 91 runs against Bangladesh.

He further had the honour of being the captain of the Pakistan cricket team during the U19 World Cup played in 2012. It is not surprising that he belongs to a cricketing family, as his cousins are the Akmal brothers (Kamran, Umar and Adnan) who have had the honour of representing Pakistan at all levels.

He needs to ground himself and not let his early success go to his head. He must work hard to maintain his fitness. Cricket is changing and moving rapidly and if a player does not adapt, he may be left behind and become a forgotten entity.

In the last few years, Pakistan has lost many players who had the talent, but could not adjust to the demands of International cricket. Umar Akmal, Ahmed Shehzad, Sohaib Maqsood and Nasir Jamshed are a few names that come to mind. All these players, due to scintillating performances earlier in their career, managed to become a part of the team but, unfortunately, could not retain their spot for one reason or another.

Along with losing form and cricketing abilities, arrogance and bad behaviour also damages these players. In my view, losing Umar Akmal was a big loss for the Pakistani cricket team. Umar scored a century in his Test debut in New Zealand and also played some good innings on the tour in Australia. It is a pity that such a talented player failed to maintain his spot in the team.

Having said that, I was disappointed when Pakistan head coach, Micky Arthur, compared Babar to Virat Kohli, considering he is just starting off his career. It will, no doubt, lift Pakistan cricket’s standards if Babar can prove to be even half as good as Kohli. But the coaches and members of the Pakistan Cricket Board (PCB) and team management should let Babar play free of any unrealistic expectations by burdening him with undue comparisons.

Pakistan team is currently touring Australia. Tours are always tough when competing away from home ground. I hope Babar maintains his composure and performs well on this tour.

I would advise Babar to take his cricket seriously. He should know that success and failure are two sides of the same coin and therefore should not let success get to his head. If Babar wants to serve Pakistan for a long time, he needs to stay firmly grounded and wield his will to give high flying performances as it’s one’s performance that guarantees their place in the line-up, not their style or potential.

I hope Babar becomes a real shining star in Pakistan cricket and continues playing for decades to come.