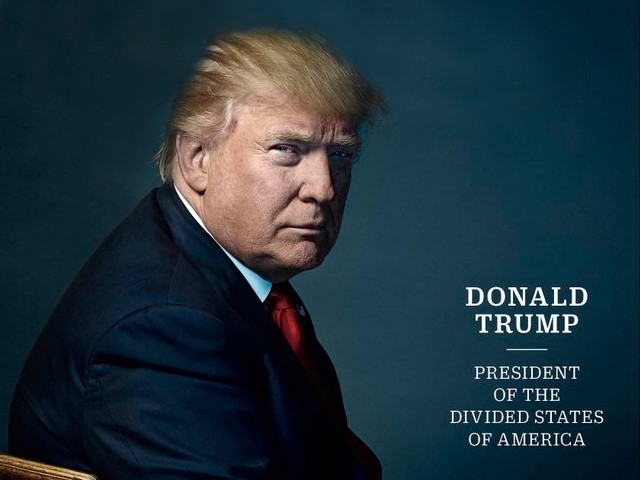 For me, a pluralistic Muslim committed to combating Islamism, Trump is rightly Person of the Year. PHOTO: TWITTER

President-elect Trump represents invigorating new possibilities for the Muslim world after two Obama administrations characterised by an extraordinary degree of United States (US) withdrawal and disengagement from the Muslim majority world.

This was a result of multiple events such as turning a blind eye during the 2009 Velvet Revolution, becoming a first passive and later impotent bystander during the 2011 Arab Spring, engaging hasty relations with Morsi’s Muslim Brotherhood in Egypt revealing the US administrations inability to distinguish Islam from Islamism, and the fin de siècle, the paralysis at the mounting power of Daesh, the complete disinterest in the Israeli-Palestinian conflict and the unremitting apathy towards Assad’s war upon the Syrian people. Trump offers a renewed engagement to a now cynical and untrusting Muslim majority world. The Obama era of ‘willful blindness’ has ended.

The Yemen War was launched directly as an outcome of President Obama’s unprecedented- an inexplicable Iran Deal which so rattled Sunni superpower Saudi Arabia that the Kingdom, recognising the US could not be relied upon to support its national interests, determined to take on the Iranian funded Houthi rebels destabilising Yemen itself. Yemen is now Saudi Arabia’s Afghanistan.

While the Arab Spring was a stillbirth from the beginning, the greatest casualty in the region was the US. The US’ commitment to democracy was seriously placed in doubt, its willingness and its ability to be an international player with sophisticated diplomatic skills was severely eroded in the eyes of the world. While President Obama with great fanfare gave a speech in June 2009 in Cairo addressing the Muslim world talking about US engagement with the Muslim world, his legacy would become one of US disengagement.

Not so Trump. While Trump ran a noxious populist campaign which rocketed to national and international attention centred on an anti-immigration, border security, nationalist platform, it was his call to ban Muslim immigration to the US which ignited world attention. I am on record denouncing such cavalier claims and indeed, as the campaign went on, he stopped his calls, instead endorsing the need for ‘extreme vetting’ from regions in the world where terrorism is more prevalent. Yet now that he is my President, I have committed to supporting his administration, and recommended a prescription for him to combat Islamism.

Trump’s candour about radical Islam is refreshing. While President Obama, eschewing the terminology, evaded the central issue in America’s war on terror – the war within Islam between Islamists and mainstream Muslims (a war Pakistan knows only too well) Trump’s candour mirrors that of among the most powerful Muslim leaders today – President Abdel Fattah al-Sisi.

Just days before the Charlie Hebdo attacks, on News Years Day 2015 in Cairo’s Al Azhar University, Sisi confronted  Egypt’s religious clerics. He did what no other Muslim leader has ever dared to do – he named Islam’s real enemy, calling for the rescue of Islam from ‘ideology’:

“It is inconceivable that this thinking — and I am not saying religion — should cause the entire Islamic world to be a source of anxiety, danger, killing and destruction for the rest of the world.”

Islam needed to recognise, and talk about its ‘mutant strain’ Sisi argued adding,

“Religious discourse is the greatest battle and challenge facing the Egyptian people,” he said. ‘We need a modern, comprehensive understanding of the religion of Islam,’ rather than “relying on a discourse that has not changed for 800 years.”

Sisi’s speech was of great significance. Even now, 16 years after 9/11, the Muslim world has little record of either our leaders or us, discussing Muslims’ collective responsibility for the Islamism that thrives in our midst.

Just as Sisi’s candour has shone light upon the most critical issue of our time: the urgent need for the Muslim world – whether here in the diaspora or in the Muslim majority world – to denounce Islamism as the imposter and explain the real meaning of the Quran, so has President Elect Trump.

Trump’s commitment to combat radical Islam is refreshing. His plans to form a Commission on Radical Islam is one I support. His views mirror those of the Muslim world leadership. Jordan’s HRH King Abdullah, in an interview with the Australian media, expressed the same hopes I do – that Trump administration will lead the world’s thus far thwarted efforts to defeat jihadist Islam. When discussing the heart breaking disaster in Aleppo, King Abdullah revealed that President Obama’s administration was effectively irrelevant in its last months

“I don’t think there’s much we can do until the new administration is in place and a strategy is formulated.”

Once more Sisi took bold steps, being the first international leader to congratulate President Elect Trump after his election victory. In a press release Sisi announced that he,

“Looks forward to the presidency of President Donald Trump to inject a new spirit into the trajectory of Egyptian-American relations.”

So while the world may have been surprised by Trump’s definitive victory and American Muslim sentiments remain skittish at best and hysterical at worst, for me, a pluralistic Muslim committed to combating Islamism, Trump is rightly Person of the Year – fresh from his Black Swan win of the perhaps most contested and electrifying Presidential election in US history. President Elect Trump may just be the great disruptor who can dismantle global Islamism and will find in his efforts the intense commitment of the Muslim majority world most suffering from the onslaught of the modern day kharijites (the defectors), namely the global Islamist jihadists. Trump, for the 1.6 billion of us, may well be the American President for the Muslim world.