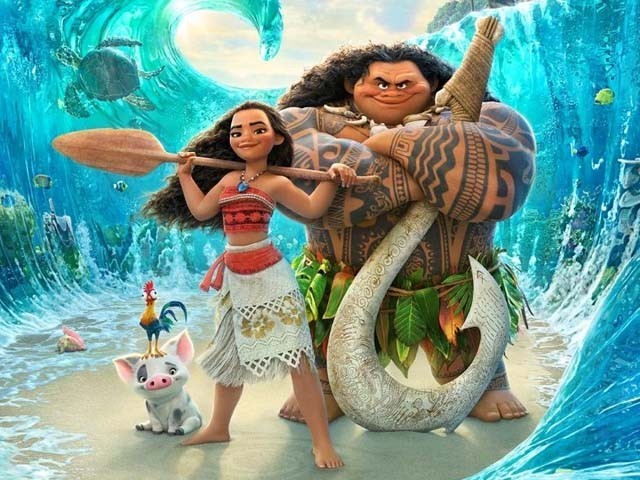 I suppose what really impressed me about Moana was the film’s attempt to go beyond Disney’s traditional ‘princess’ template and succeed at doing so. PHOTO: IMDb.

The Disney films of the 80’s and 90’s had a very specific formula for success that helped make them very successful for many years. This formula was based on having catchy tunes that would help advance the narrative, while also being a joy to listen to. With stories centering on spirited young protagonists finding their way in the world, usually aided in some part by a cuddly animal sidekick.

Moana finds Disney returning to this formula after decades, and not only does Disney manage to revoke so many of the elements that made it work so well in the past, but they also find new ways to reinvigorate it, which in-turn makes Moana a delight on nearly every level.

The film follows the story of the titular character, a young 16-year-old Polynesian girl voiced by Auli’l Cravalho, who is the daughter of a Polynesian chief, Chief Tui (Temeura Morrison). Although Moana’s people once voyaged the seas, they have now settled and established a home on a bountiful island. It isn’t for long before their idyllic lifestyle is endangered. So to save her people, Moana must set sail on a daring journey. During her journey, Moana meets the once-mighty demigod Maui (Dwayne ‘The Rock’ Johnson), who guides her on her quest and together they sail across the open ocean on an action-packed voyage, encountering enormous monsters and impossible odds. But ultimately, what it ends up being most is a journey of self-discovery.

With gorgeous imagery, toe-tapping songs, and instantly endearing characters, Moana works like a charm. And when you look at the pedigree involved behind the film, it’s hard to think of a reason why it wouldn’t. It’s directed by Ron Clements and John Musker who previously directed Disney classics like The Little Mermaid and Aladdin. The songs are composed by none other than Hamilton creator Lin-Manuel Miranda, with Dwayne ‘The Rock’ Johnson doing voice-work as demigod the Maui.

But I suppose what really impressed me about Moana was the film’s attempt to go beyond Disney’s traditional ‘princess’ template and succeed at doing so. Moana may be a Disney princess, but she’s doesn’t need a romantic sub-plot, or a prince to define her. And the fact that this film addresses issues of identity, environment, and diversity with such intelligence and enthusiasm makes it all the more better.

But don’t mistake it as a film that’s out there to make a statement either – it’s one of the reasons that contribute to it being so good, but the film is also extremely enjoyable and entertaining throughout. The animation is quite breathtaking, and the best I’ve seen in an animated film in recent times. And though the film has a few set-pieces, they are done so well, that I was always excited. And what’s even great is that the entire thing never seems to lose that keen sense of wonder and adventure that Disney stories are always known for having, all the way through.

I also think a lot of credit goes to the terrific voice-work by Auli’l Cravalho and Dwayne ‘The Rock’ Johnson, as well as the great music on offer by Lin-Manuel Miranda. Cravalho and The Rock are wonderful together. The Rock provides some good comedic relief as the goofy and narcissistic Maui, while Cravalho embeds Moana with great sense of spirit and determination, which makes both their characters lovable in their own unique way. And it definitely helps that they both can sing pretty damn well too.

Moana finds Disney treading a lot of the same ground they have already treaded in the past, but it still manages to bring a lot of fresh new ideas to the table and delivers on strong humor, well executed action endearing characters and memorable music, making it a worthy addition to the Disney pantheon.