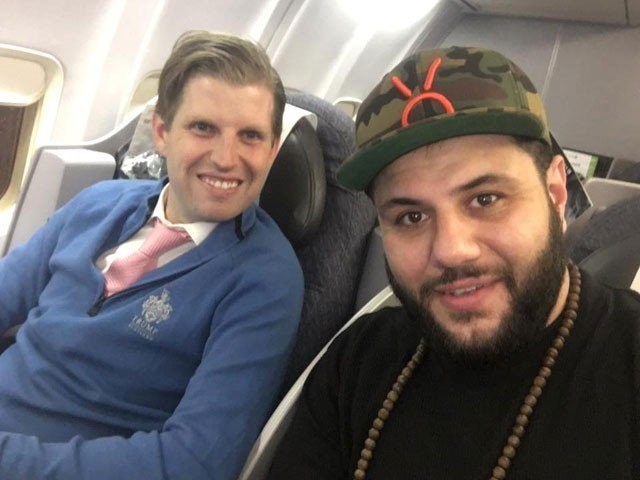 Mohammed Amer, a Muslim American comedian, sat next to Eric Trump on a flight. PHOTO: FACEBOOK.

Recently, the Huffington Post covered an incident where a Muslim American comedian, Mohammed Amer, sat next to Eric Trump on a flight. A fellow passenger warned,

“I wouldn’t even sit next to him if I were you.”

Mr Amer, ignoring the advice, took a seat and had a pleasant exchange with the son of the future POTUS, even when they discussed immigration and the proposed ban on Muslims.

“We need to…work through the problems and find the solutions… (and not create) more chaos and more hate between us.”

From my small corner in the Pacific Northwest, however, “chaos and hate” seethed. The post-election article in our local Seattle paper, The Stranger, said it all:

Seattle is the most liberal city in arguably the most liberal state in America. And folks here are in a state of rage and catatonic shock – they’ve refused to attend school and marched through downtown blocking traffic, as one of their leaders, Jamila Prayapal, announced,

“We will have to fight for social justice as never before.”

In this atmosphere, my wife and I watched David Sedaris, a writer/comedian, at Beniroya Hall in downtown Seattle. Before the introduction, the host ranted against Trump, the audience groaned and moaned, and the show went on. Sedaris delivered his trademark monologue, balancing tragedy and comedy, his sister’s suicide and the idyllic Carolina Island of his youth where they called houses “Clamelot” and boats “Row versus Wade”. At the end, Sedaris took a question and answer session. An audience member asked:

“Can you offer us any hope or optimism or humour going forward with Trump in the White House?”

But we can and should.

I share with my Northwest brethren this shock and repulsion toward Trump. But that’s where our common ground ends. The answer to fix our country comes from liberals uniting with conservatives and independents on issues of race, immigration, economy, and human rights. If the left continues on their “social justice” warpath, they will divide our nation. Many conservatives aren’t “racist, xenophobic bigots”, and to treat them so is not only wrong but harmful. If we believe in the aphorism that it takes “two to fight”, we liberals must engage. The winners won’t change, the losers must.

To tackle pressing issues, we need to differentiate between bigotry/xenophobia versus legitimate inquiries over policy and culture. This means an examination of the narrative that racists propelled Trump to victory. Consider this via The Washington Post:

“Comparing results with 2012 shows that Trump actually performed slightly worse among white voters than Mitt Romney did. He did, however, perform better than Romney among blacks, Latinos and Asian Americans, making it more difficult to claim that racial resentment was the dominant factor explaining Trump’s support nationally.”

When we discard racism as the primary cause, the election becomes more complex. Within Washington, the dichotomy parallels that of the country, an overly liberal west versus a conservative and bucolic Eastern Washington. Seattle, with its thriving economy fuelled by corporations such as Amazon, Starbucks, Boeing, and Microsoft, well enjoys the proverbial fruits of capitalism, yet Seattleites tend to elect leaders that push for socialism. But socialism can only function after wealth via capitalism has been created, and in thriving economies, the two philosophies have a symbiotic relationship. Yet the elitist left forces policies on the less fortunate “red” half of our state, including the raising of minimum wage. Seattle can afford generosity, Twisp not so much. This dialectic repeated nationwide, as Democrats pushed for bigger government and more regulation.

The Grand Old Party (GOP) not only won the White House, but dominated in gubernatorial elections, and either retained control or increased their numbers in state and national legislatures.

So what should we do?

Have conversations with mutual respect. Listen to why prominent Muslims such as Qanta Ahmed and Asra Nomani hold optimism for America. A little more than a decade ago, 70% of Muslims, according to the Council on American-Islamic Relations (CAIR), voted for Bush. The GOP hasn’t changed that much. But Democrats and the left have veered mightily down the wrong path. For liberals, if we wish to return to our values, we must disassociate ourselves from the authoritarian elements of the “social justice” movement, the calls for censorship, witch hunts, safe spaces, and the groupthink that’s taking over media and our universities. If we can, then the Alt-Right and White Nationalists will be the last bigots standing.

As said, it takes “two to fight”, and right now, the left is losing. We should reach out to those on the other side. Eric Trump and Mohammed Amer did.