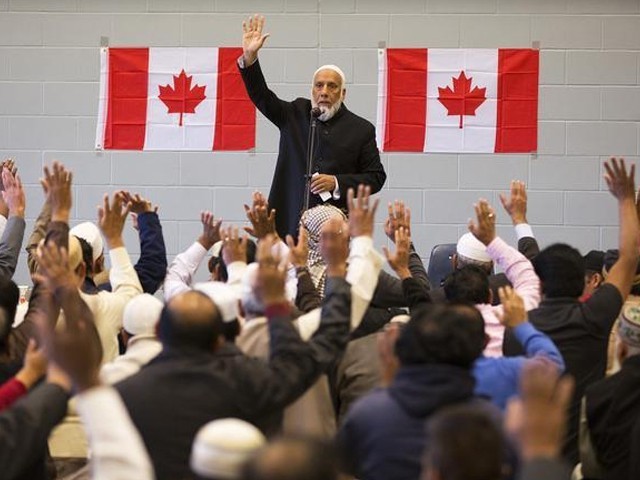 Imam Syed Soharwardy and fellow muslims show their support in hands against the attacks on Canadian soldiers during their memorial service in Calgary, Alberta, October 24, 2014. PHOTO: REUTERS

While I sip tea and watch my children play around in our almost four-year-old home in Canada, I can’t help but reassess what it means to be me, as 2016 comes to an end – a Pakistani Muslim immigrant in Canada.

I can’t help but feel this warmth for this great nation’s hospitality and heart. At the same time, like an itchy throat signalling the onset of a ruthless flu, I shift uncomfortably in my seat as corroborated stats show the rise and effect of hate crimes across Canada. I can’t help but remember last year’s shootings in Ottawa and how Canadian Muslims were shoved under unwanted limelight. I can’t help but think about our neighbouring country’s recent abomination, the Trump effect, and its poison trickling across the borders. I can’t help but think about the unsaid nervousness and fear that some immigrants around Canada may be harbouring. With negativity and hate dominating our mind-sets under the guise of free speech and the uncanny right to be inhuman, it’s impossible to stay aloof.

I live in Mississauga, one of the main cities in the Greater Toronto Area, aka GTA – a city so exhilaratingly multicultural and cohesive that sometimes it is hard to imagine a world at war. I live in a city where I see turbans, hijabs, beards and all sorts of individualised traits that people feel pride in, and adopt because of their beliefs. I see Irish pubs, tattoo parlours, Italian bakeries, desi stores carrying everything from Tibet Snow to Everyday tea whitener. I see the latest trends of western clothes at H&M, Zara, and thriving Nishat Linen and Junaid Jamshed stores in the same vicinity. I see mosques, churches, synagogues and temples. I see halal food being introduced and served in the best Canadian restaurants.

I see a Pakistani Canadian woman as the currently elected MP of this city. I see Muslim men’s baseball and Muslim women’s softball leagues. I see some public schools that have a provision for Friday prayers. I see calendars from my children’s schools highlighting all important days of major religions and cultures in the city. I see lavish Eid celebrations in local public school grounds. I see Muslims feeling festive during the Christmas season. I see neighbours sending treats to each other on special occasions. I see annual Islamic gatherings like the MuslimFest and the Reviving the Islamic Spirit (RIS) convention where thousands gather to celebrate with soulful discussions and food.

I see Canada’s 150th birthday celebrations entailing a new version of the national anthem in 12 commonly spoken languages. I see so much love and acceptance that it is hard to force this hateful lump of fear and scorn down my throat.

While some don’t see all the colours in the rainbow, I still choose to believe in this country’s inbred goodness. I choose to sympathise with those suffering but still look ahead. I choose not to burst my bubble because of a few thorns. Even when I hear about a Muslim woman being called a terrorist in a super market. Even when a poor teenager is attacked on the pretext of a hate crime. Even when a mosque is vandalised. Even when 49% of Canadians feel that Canada is inviting too many immigrants. Even when certain places in Quebec are famous for their xenophobic views. Even when some parents feel uncomfortable letting their children go out alone at night.  Even when for some Canadians, bigotry is the new black.

Why so much hope, some may ask?

I’ll admit, it’s not just my experience. It’s a subtle, collective feeling of strength and togetherness that I feel every day. Canada recently became the first western country to have passed an anti-Islamophobia motion that openly denounces all forms of Islam-directed hate. Public campaigns like “Toronto for All” are shining examples of efforts to curb racism. Prime Minister Justin Trudeau doesn’t hesitate to tear up when talking to Syrian immigrants during a radio show.

Sure, opposition doesn’t leave any chance to challenge his honesty, but for many Muslim Canadians his kind words make the difference. There is a surge of people who are as proud to be Canadian as they are to be Muslim. These are people of action as opposed to being propagators of self-pity or the ‘why me?’ syndrome. From charity, community help, and other volunteering work to improve the society, they are the real deal.

I remember reading Warsan Shire’s chilling lines and trembling to the core,

The world is bleeding and stains are splashing across all our faces. No one is immune and no one can hide. Whether it’s Pakistan, France or Canada, safety and security are now relative terms. And the quicker we understand that incessant bickering will only send us decades behind, the better it will be.

So while some of us do fear an outbreak of irrational hate towards immigrants, it is not a deal breaker. We will continue to stand on guard for this country and while we’re at it, we’ll have each other’s backs too.

This is what will continue to make Canada the glorious nation that it promises to be.