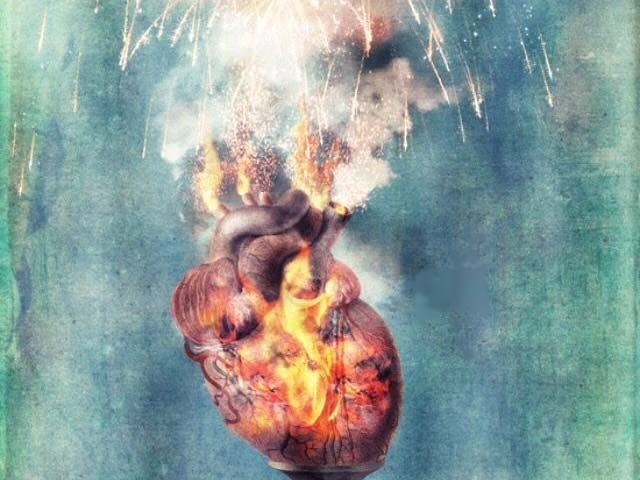 I found out early that a person’s heartbeat has a language of its own. PHOTO: PINTEREST.

Her breath was already heavy last night. Her heartbeat at 45 clicks a minute. But it beat. Quietly and clearly; it pumped on. The light on the monitor was green and it would beep every now and then. The sound meant she was alive.

It’s been three weeks since I’ve been in here. At first I thought the walls would close in on me. It felt claustrophobic, but not anymore. I know the nurses by their first names now, and the chef at the cafeteria turned out to be an old college colleague. He always had a knack for cooking. It felt appropriate to see him there after all those years.

All I had to accompany me was a Stephen King book I’d read a million times over. And her; although she didn’t say a lot. I began to speak to just the sounds in her monitor. I had profound conversations, believe it or not. I found myself rediscovering me in those moments. With my hand clutched into her motionless hand, I’d go into a place where I hadn’t been to in a while, and see myself again. With her. Together.

Only that beep could give me that.

I found out early that a person’s heartbeat has a language of its own. Unique to every individual, eventually you’re able to speak to it. Its slangs and its idiosyncrasies, all of it becomes a part of your diction. You’re fluent in its language. You can sing its songs, write its poems.

I learned her language very quickly.

We met in college too, just like the chef. She had an elective with me, Biology, I think it was. That scrawny looking girl with her glasses too close to her eyes and her hair in a bun with a single strand of black hair jumping across her face. I absolutely hated her.

But she had chosen to sit with me in lectures. She was always untidy and unprepared for class, always late to the seminars and almost always in a rush to head out. It bothered me, for some unholy reason, why she was so irregular.

She would sit next to me and we had developed this unspoken friendship. She felt free to reach over and grab my notes to copy them down, share my book, and take my stationery. And just before rushing out, she would give me a nod while clutching her bag over her shoulders, and leave.

So one day, after a long time of immense curiosity, I followed her. I spotted her walking fast through the back garden towards the hospital across the road. She stood with a crowd and walked with them when they moved across. I saw her move over to the retirement homes that the hospital sponsored. Her hair could easily be spotted, even at the distance I was.

I paced myself so I didn’t run into her, but close enough to see where she went. My curiosity got the best of me, and I thank it to this day. She went into the building and I followed her. Up the stairs and around the corridor, right up to room number 281. I heard her just before I walked past that room. She was reading a poem in the softest voice.

“The lights have dimmed around your head,

Though my love is still alighting.

I have shown my rays across the sea,

But your eyes seem to be fighting.

Why, my love, have you been scared?

All time is, is numbers and more.

We may gain some if we love again

For isn’t this what time is for?”

Someone clapped a slow but loving clap.

“What else do you want me to read, Nani?” she asked.

I remember sitting at the edge of that door for as long as she spoke. Her words filled me up in some ways. In other ways they left me empty. But they filled up a hole in me that I didn’t know existed. Just that day, that day was enough.

I walked out of that retirement home and went back to school. I sat in a class for Human Behaviour but I knew nothing about what was going on. I was moved to some unpleasant degree of emotion. So I remained patient, and kept myself in check.

The next time I saw her was in that same Biology class. She rushed in again and sat beside me, breathing gulps of air in and out of her mouth.

“The roads… so busy… not enough time…” she said and I nodded.

She pulled out her books and I looked into her bag. A blue journal was resting in it. She pulled it out when she saw me looking at it and I quickly stared at the board in front of us again.

“Do you mind?” she said. “Not polite to peer into other people’s bags like a creep.”

I blushed under my own glasses but gathered enough courage to respond.

“I was just wondering if you needed help with some stuff,” I whispered. “You always come in a rush.”

She sat with her tongue pressed against her cheek and I sat with my lips pursed. We didn’t speak for the rest of the class and I remember she didn’t nod when she left either.

For two weeks, she disappeared from class and eventually I went to the retirement home and they refused to let me enter. Some complaints of intruders lingering along the halls. Go figure. They wouldn’t disclose any information about room 281 either. So I returned, defeated.

She showed up to class a few days after. Right on time. Not hurried, or out of breath. She sat one level beneath me on a desk to the left and pulled out her things. I saw her from my desk and gathered my things to sit next to her.

“You haven’t been showing up,” I said sitting down.

She looked at me; her eyes were tired and red.

“Everything okay?” She nodded.

“No reason not to be.” Her voice was monotonous.

Our friendship wasn’t as close for me to ask blatantly about the retirement home. So I figured I’d beat around the bush.

“I used to see you around the retirement home behind the hospital.” She looked up at me. I didn’t know how to follow up on that statement.

“Why were you there?”

“I read to the old,” I lied. “They love me.” She cocked her head to the side in disbelief.

“You read to the old there?” she repeated and I remember nodding confidently. “I did too.”

I understood what she meant and I felt sorry for her. She seemed distant and I remember wanting to hug her or tell her everything would be okay. Or tell her something equally comforting. Instead I did this.

I immediately regretted it. And she turned to me again and she looked at me with disbelief once again.

“You write poetry?” she asked.

Her hair wasn’t in a bun anymore. Instead it fell brilliantly down her shoulders. It distracted me.

The class had started.

“You’re lying. Show me.” She demanded.

I shook my head and she pulled my bag away from me and dug through it.

“I thought that was impolite!” I whispered loudly and she shushed me.

She found my little diary. It was small enough to be noticeable. She gave me my bag back and I tried to reach over for my diary but she pushed me away.

The diary was empty except for the first page. On it, I wrote four lines. It was just titled ‘Her.’

To this day I don’t remember what I wrote because I never saw that diary again. She took it from me, forever. But instead she gave me something else. Her time.

All I remember was that she had smiled a very wide smile. A smile that anything else I could have said or done could not bring. And that was enough for me.

That was 25 years ago. And it took me 25 years, from that day to this, to understand how to read the language of the heart. It wasn’t hard, but I just wasn’t ready.

So today I read her the poem as I remembered it. Jumbled up, the words flew here and there and they came out wrong. But I think the beat of her heart understood it. Because when I read the final word, I only heard one sound. It was one beep, long and final.