So… in Pakistan people are getting divorced because of… gas shortage? 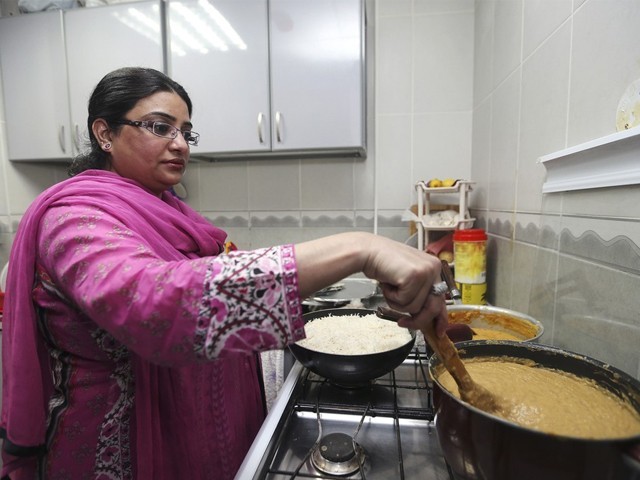 Badar Salman prepares an order of home-cooked dishes including dal, haleem and rice in her kitchen in Umm Al Quwain. PHOTO: SARAH DEA/ THE NATIONAL

Whatever you say about our parliamentarians, you have to admit they have a sense of humour. I’m referring to the recent claim by the learned MNA Tahira Aurangzeb about how gas shortage is the reason for the increasing divorce rate in the country – she is the mother of Ms Maryum Aurangzeb, our minister of state for information, who said that our ministers and senators cannot survive on Rs60,000 a month.

The learned female lawmaker wasn’t sure of our divorce statistics two or three years back, when there was no shortage of gas, compared to how many cases there are today to prove her claim. But of course doing the required homework is considered a great sin among those who sit in that august house. Almost all our assembly members are prone to making wild statements without a shred of proof. A look at what Imran Khan, Abid Sher Ali and others say every now and then about their opponents prove my claim.

I wonder how gas shortage can make a man lose his head and pronounce those three words which every Muslim woman dreads to hear. Why don’t long electricity breakdowns have the same effect on him? According to Tahira Aurangzeb, when every Pakistani man returns home every evening, he needs to fill his stomach to the brim. But when he finds out that his wife was unable to cook any food owing to shortage of gas, he bursts into a rage and divorces his poor wife. I assume that he then remarries immediately or goes to his second wife (if he has one), and the whole scenario is repeated. So the number of divorces should be astronomically high, at least in those families the lady parliamentarian is acquainted with.

I tried to gather some information on divorce statistics in the country over the past few years, but even though I found many articles on the subject, I could not find any concrete figures, as apparently the government does not register such data. So I thought about how many divorces have occurred in my own immediately family – paternal and maternal descendants and ancestors.

Since 1856, there have been four divorces in my immediate family of nearly a 100 members (10 of whom are no longer alive) in a span of 80 years. The last divorce in the family took place 11 years ago, when there was plenty of gas to go around.

While digging deeper, I asked other people to find out if they have observed a rise in divorces among their communities.

“Out of the question,” said one of my employees from the rural areas, “We’re not cowards, if my wife ever asked me to divorce her, I would assume she has a boyfriend, and would immediately kill her.”

“Not in my family or relatives, but I have heard that divorce is very common in those families where the women are allowed to work,” said one of the many illiterate men I come across on a daily basis.

“Of course there have to be a lot of broken marriages in our society. It’s caused by allowing women to watch too many TV dramas and going to movies. I smashed my TV set many years ago, so there have been no divorces in my family”, said an aged neighbour.

So, despite not having observed even one broken marriage, these men blame women for the so-called increasing divorce rate in the country. I wonder if any of our male parliamentarians (particularly Imran Khan) would agree.