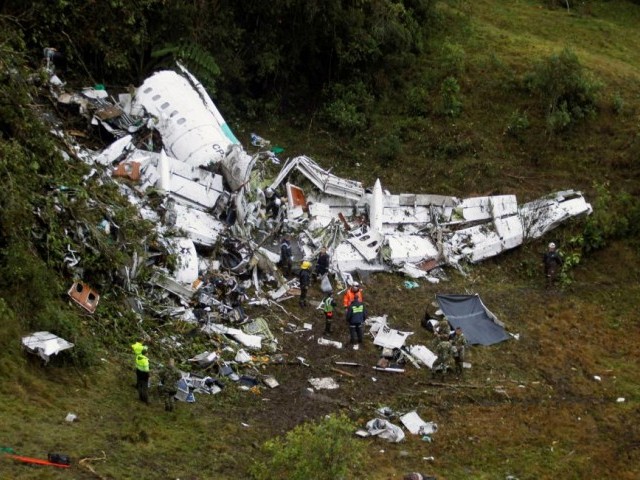 Rescue workers look at the wreckage from a plane that crashed into Colombian jungle with Brazilian soccer team Chapecoense onboard near Medellin, Colombia, November 29, 2016. PHOTO: REUTERS

The Brazilian plane crash in Colombia yesterday has virtually left many in shock and tears. A sports fanatic myself, the news was terribly heart wrenching, considering an entire football team simply stopped existing, in a flash. The ill fated chartered carrier had 81 people on board, which included twenty two members of a Brazilian football club, Chapecoense Real. The team was supposed to play against the Medellin team Atlético Nacional in the first leg of the final of the Copa Sudamericana, the South American counterpart of Europe’s Europa League.

The latest reports suggest that only six passengers survived the crash, including three members of the unfortunate team, defenders Alan Ruschel, Zampier Neto and reserve goalkeeper Jackson Follman. The team goal keeper Marcos Padilha, better known as Danilo, was also pulled alive from the wreckage but later succumbed to his injuries at the hospital.

Chapecoense Real is a top flight club from the Brazil’s premier division, Série A and is based in the city of Chapecó, Santa Catarina, a small city with a population of only 200,000. It was founded quite recently in 1973 and their fairy tale journey started when they got promoted to the Brazil’s Serie A in 2014. Since then, there has been no turning back for them. They were currently ninth in the table, but yet ahead of the more famous and recognised Brazilian clubs such as Sao Paulo, Fluminense and Cruzeiro.

After beating the Argentinean side San Lorenzo in the semi-finals, Chapecoense became the first Brazilian team in three years to qualify for the finals of Copa Sudamericana, the second most important club competition in South America.

Tributes started pouring in as the world woke up to the tragic news, led by the legendary Brazilian Pele who wrote,

“Brazilian football is in mourning. It is such a tragic loss. My sincere condolences to the families of the deceased. Rest in peace.”

“Sadly those lads, who were on the way to becoming a force in football, took the wrong plane.”

Atlético Nacional whom the unfortunate team was supposed to play in the final of the South American cup has requested the organisers to give the Copa Sudamericana title to their opponents as a tribute to the all the team members who passed away in the tragedy. In a statement, the team wrote,

“(We request) that the Copa Sudamericana title be handed to Chapecoense as an honorary trophy for its great loss, and as a posthumous homage to the victims of the fatal accident that has put our sport in mourning.”

David de Gea, Manchester United’s Spanish goalkeeper tweeted his shock and wrote that he used to share the locker with one of the crash victims, Cleber Santana.

Deeply affected by Medellin's plane crash. I shared locker with Cleber Santana and it's difficult to reveal how I feel. A huge hug. pic.twitter.com/TdeNzssZFN

I recall several other incidents where some or entire sporting teams met their ultimate fate under such tragic circumstances. Manchester United lost eight players and three crew members in 1958 when their plane crashed while taking off at Munich airport. In 1993, the entire Zambian national football team perished when their plane plunged in to the Atlantic Ocean. A mid air collision over Ukraine in 1979 had ended 17 lives of the then Soviet Union’s top division team, Pakhtakor Football Club .

One of Liverpool’s greatest managers, Bill Shankly, once said that,

“Some people think football is a matter of life and death. I don’t like that attitude. I can assure them it is much more serious than that”.

But when an incident as tragic as this happens, it puts the aforementioned quote along with the whole sport of football in an existentialist perspective.