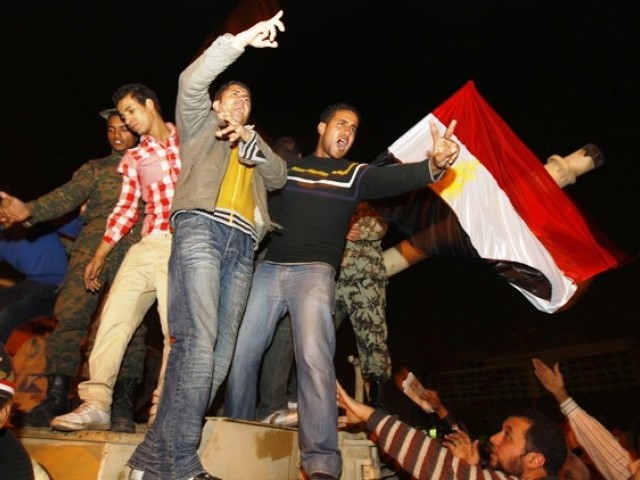 A new constitution before elections seems like a dream.

While I do not want to detract from the amazing achievement of the Egyptian people, their future is still uncertain. Who will fill the power vacuum?

Omar Suleiman is not a favourite

Touted as a replacement by Mubarak and tacitly supported by the US, Omar Suleiman clearly isn’t popular. This is hardly a surprise, given that he was head of Egypt’s intelligence agency (you know, the one that allegedly tortures lots of people) and, according to Wikileaks, told Israel (who love him very much) that he’d like “Gaza to go hungry, but not starve”. Not exactly a hero.

Who is Mohamed ElBaradei?

He is the former International Atomic Energy Agency (IAEA) head who was originally considered to be a front-runner to stand against Hosni or his son Gamal Mubarak in the next election.  He has little political history in the country and many fear he will have little idea how to run it, despite his lofty speeches. In any case, he seems to be putting forward a candidacy of sorts – he appeared in Tahrir square with a loudspeaker during the protests and has already written a New York Times op-ed since Mubarak’s exit.

What about the Muslim brotherhood?

Despite the fear mongering from the usual suspects, I really don’t think the MB present any kind of threat. They are still a political force in Egypt, but are a long way away from being a dominant one. Thanks to repeated Mubarak-era purges, they have zero ground within the army (who are now running the country) and their support among the people has never been estimated at even approaching 50 per cent of the vote.

Moreover, this is not the Muslim Brotherhood of Zawahiri, Hamas or even Sayyid Qutb. The party is largely non-violent.

I don’t know a great deal about this man who recently resigned from his post as Secretary General of the Arab League. He has a political history in Egypt, albeit, as part of the National Democratic Party (NDP) and as a supporter of Mubarak. But this seems more out of political expediency rather than strong ideological agreement. Will he suffer politically for his past?

Personalities aside, I think there are two potential outcomes to the current disorder:

1. The military leadership (and my Pakistani friends have been the first to point out this danger) will devolve into a dictatorship that maintains its grip on power. We do not know much about what Field Marshal Mohammed Hussein Tantawi, Chairman of the Supreme Council of the Armed Forces, is thinking, but we do know that he’s a veteran of post-revolution Egyptian politics. Military-backed dictatorship is all the 75-yeard old has ever known. Can you teach an old dog new tricks?

2. Elections are the most likely outcome, but that doesn’t necessarily mean the outcome will be positive for Egyptians. The opposition in Egypt is fragmented, disorganised and doesn’t have a strong foothold. The Muslim Brotherhood mentioned above may be the strongest group among them but is not strong enough to leap out and win any vote by a landslide.

The Wafd party, despite some resurgence, is still largely a spent force in Egyptian politics, and while I haven’t been following events with a magnifying glass, I’ve seen little action from them over the past few weeks.

The jury is very much out on external personalities like elBaradei and Moussa. Will they have the charisma, the institutional support within Egypt and the sheer personal gravitas to win an election and make their mark on the Egyptian consciousness? All signs, at this stage point to no.

I am not familiar with internal NDP politics, and don’t know which personalities within the party could emerge from the protests with enough clout to successfully run in an election. But I can say with confidence that theoretically this is a very possible outcome.

The machinery employed by the state to suppress Egyptians and dominate public affairs is very well developed and has been in place for some time. If a deal can be brokered with the military, I think they would much rather see an orderly transition of power to another strongman, rather than chaotic and fragmented elections that lead to some sort of unstable coalition. Militaries, by definition, like stability. Who could emerge from the current sinkhole that is the NDP, it is difficult to say, but it could be some wily Egyptian politico.

We continue to hope and pray for a positive future for the Egyptian nation as now is not the time to rest on laurels.

The original version of this post has been published here.