Is child sexual assault or rape, in this day and age, still excusable? 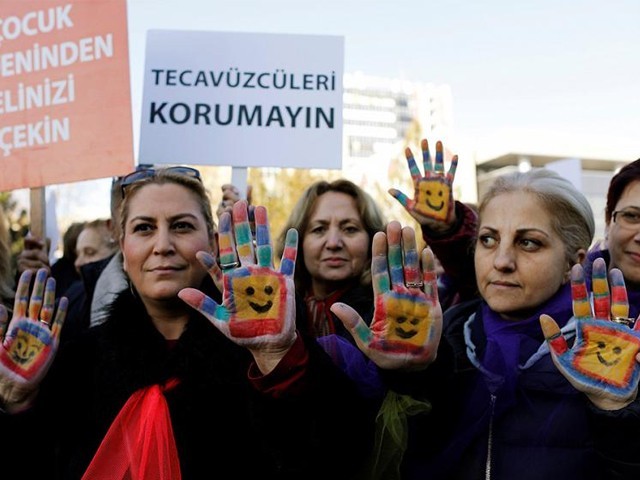 Protesters show their painted hands during a protest against the proposal. PHOTO: REUTERS

Right across the Turkish capital, Istanbul, countless people are huddled together clutching boards and posters in a form of protest. Turkey has been struggling with a number of political problems and most of them are associated with the so-called Islamic State (ISIS) in neighbouring war-torn Syria. But this time, unlike the others, this problem doesn’t have anything to do with ISIS but is triggered by troubling issues inside the country.

A new Turkish bill has been proposed which pardons men from crime and punishment if they marry the victim they raped. Thousands of women were outraged. Human rights groups were aghast. Prominent figures around the world condemned the bill. Eventually, in the end, the bill did not pass and for once, the people’s voice was heard and the government listened. Men who rape women and girls will go through the trials of law and order and will not escape punishment through marrying them. But this matter is yet another example of what sort of world we live in.

Being in a British society, I’ve been brought up with different notions about rape and abuse. It is wrong and completely illegal. Regardless of whether the perpetrator was a complete stranger, your partner or a family member, violence and abuse against women is wrong and the victim has the right to seek justice and see her perpetrator behind bars. That’s the least the law can do when a woman or girl has been through a traumatic experience and her life has been badly affected. So it came as a complete surprise and a mouth-dropping shock when I scrolled up the list of news headlines to see a story about a new bill that could potentially pardon perpetrators if they marry the rape victim.

I’m not a big expert on marriage nor have I experience in matchmaking but it isn’t rocket science to deduce that rapists never make good husbands. Men who have the temperament of forcing their will on young girls and women can never be the ideal partner and such a movement – marrying the victim – will only suffocate the girl in her awful experience even more. Marriage – regardless of whether it’s arranged or love – is built on the foundation of many factors involved which includes love, trust, understanding and respect. A victim or her perpetrator cannot possibly love one another. The former cannot trust the latter. Understanding is out of the question when you have been violated by this person. Respect does not exist between the victim and the perpetrator. So how can they assume that this bill would work?

A victim would never consent of her own will to be married to her rapist and such a movement will only aggravate the circumstances that women are trying to fight. Pressures of giving in or agreeing for the marriage is one thing but it will always give the message that justice isn’t possible if you’re a woman. It just goes to show what extent men are willing to go to escape punishment. Like Pakistan, Turkey seems to be a male-dominated society where women are trying hard day and night to strive for an equal voice. That struggle for an equal voice would be difficult to continue if bills like these were passed. It just proves how patriarchal some societies are, how much we’ve accomplished and how much yet remains to be achieved.

In the early 20th century, British women fought hard – through their own ways – to attain the right to vote; an idea too ludicrous and empowering at the time. Just under a hundred years ago, after the First World War, certain women won the right to vote with all women being able to do so 10 years later in 1928.

We, as women, are proud to have accomplished so much. Today, women are doctors, nurses, teachers, lawyers, pilots, military personnel and politicians. With this we can see that women have a lot to get to where they are, but the road ahead is still long and arduous.