Love is more than roses: The legends behind Valentine’s day 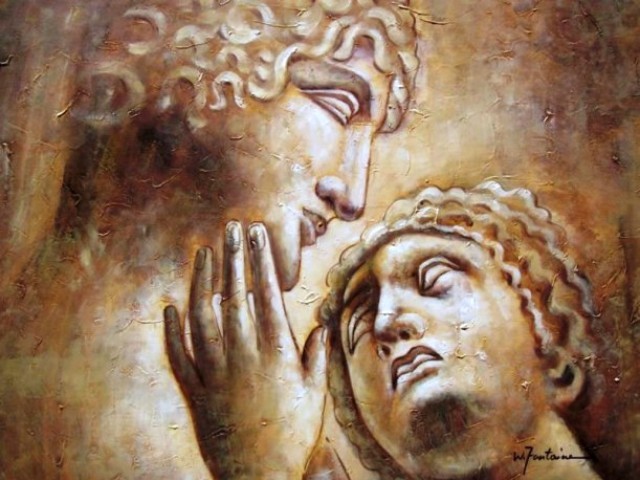 Who St Valentine was remains a mystery.

As sentimental music lulls the senses over candlelit tables where love struck eyes caress each other in banal and repetitive gestures, the voice of reason within me asks, “What the hell is wrong with us?”

If someone told me February 14 was the day that fat cats from Hallmark and flower tycoons from around the world gather to toast their Dom Perignon and light their cigars with $100 bills to celebrate the world’s stupidity, I wouldn’t be surprised. It is one of the greatest commercial scams ever created. I admit, it’s infectious and even I have succumbed to its stupidity, but who would like to admit that his heart is cold and there’s no room for romance, love, celebration or anything lovely like that?

But the real question is, why do we fall for it? Shouldn’t love be celebrated all year instead of rather disingenuously only once a year? Perhaps somewhere at the back of our minds, we justify it by thinking that it’s a good thing and that we ought to honour its symbols and history.

Valentine’s Day is supposedly held to honour St Valentine. But who St Valentine was, remains a mystery, as there are three possible individuals with the name Valentine who may be contenders for the title. All three were martyred in the early days of Christianity which may explain why such little documentation about them exists. Even today, an insignificant church in the Ukraine purports to house the authentic remains of St Valentine.

How’s that for romantic?

On death row and in love

Other legends talk about the imprisonment and execution of a priest named Valentine, active during the third century in the Roman Empire. The emperor at the time, Claudius II, decreed that all single men were forbidden to marry and ought to serve in the army.

Valentine, foolish like any true romantic, continued to perform treason by transgressing the edict and married a young couple. Imprisoned and on death row, Valentine fell in love with the daughter of his captor and on the day of his execution, sent her a love note signed, ‘from your Valentine.’

Of course, all of this took place on February 14. Since then, every sentimental sap with a little originality has used this stomach-churning, trite phrase to convince the opposite sex of his intentions.

In 498 AD Pope Gelasius declared St Valentine’s Day to be commemorated on February 14, but of course, doubt still looms over whether he was referring to the saint, the sap, or a symbolic mixture of both.

Another interpretation offers a more pragmatic explanation. In Rome, the Ides of February featured a celebration known as the Lupercalia. This holiday played a part in Shakespeare’s Julius Caesar.

The Lupercalia, named in honour of the she-wolf that nursed Romulus and Remus, was a fertility festival. Hence, in true pagan tradition, after the sacrifice of a goat, the hide was cut into strips, dipped in the blood, and used to flog women in the superstitious belief that it would make women more fertile. Whatever works, right?

After Constantine’s Edict of Milan which legitimised Christianity in 313 AD, efforts were made to convert pagan holidays into Christian ones to allow for a smooth transfer and acceptance of Christianity. Hence, Sol Invictus became Christmas and the Lupercalia, became St Valentine’s Day, minus the blood-soaked hides and naked women.

The pagan romance we pay millions for

Neither provides the true explanation of the holiday. All I know is, some genius turned a primitive pagan holiday into a sappy and cheesy celebration and converted the world into a bunch of gullible morons. What’s more interesting is how animal hides dipped in blood have evolved into gift-cards, heart-shaped candy, teddy bears and other symbols of love and affection. While the aforementioned fat cats, flower hawkers, gift-card writers and candy-salesmen reap the world’s wealth one pathetic, love-struck idiot at a time, let us prepare now for an auspicious Valentine’s Day for 2011.

But before you run to find that perfect present and book that romantic dinner for two, let me say this: if Valentine’s Day symbolises love, maybe it’s time to realise that neither the chocolate, flowers nor teddy bear will really make much of a difference. Tell that special person how you feel and make an honest and meaningful night out of it.

It might just be more romantic than a Hallmark card.