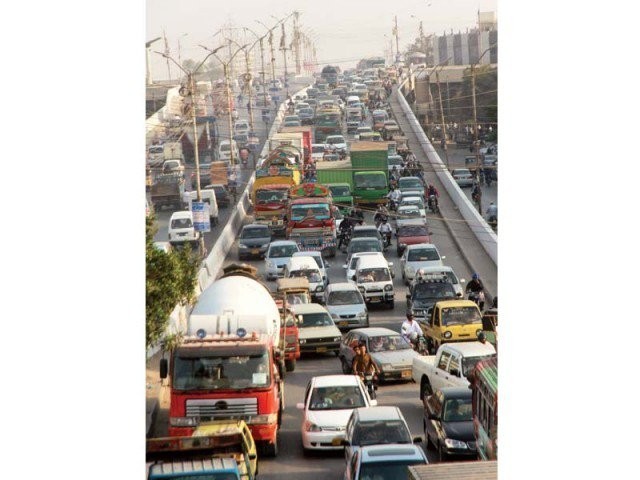 A view of the traffic jam at the Baloch Colony Bridge on Tuesday. Traffic jams were witnessed in most parts of the city due to the ninth IDEAS exhibition being held at Expo Centre. PHOTO: FILE

Like every year, a proud tradition has come about again; one where government officials and army generals hold highly sophisticated weapons in their hands and pretend to target invisible enemies – so the foreign dignitaries they are trying to entertain are impressed enough to purchase the firearm in question for big bucks – because, well, these steel toys do not come cheap.

The place is flocked by bureaucrats, generals and a whole lot of politicians in one place having a good time and appreciating the deadliest weapons produced by a third world country.

Although this is seen every year under the name of International Defence Exhibition and Seminar (IDEAS) – it is not why I am writing this piece.

Three days before the event was to commence, I was leaving a nearby sports complex when I came across a massive banquet type of tent located in the parking lot – the tent occupied more than half the place reserved for members’ parking. Upon inquiring I came to know that the army is storing their equipment for IDEAS inside the parking area.

I thought to myself, where were people supposed to park their cars then? Would they designate an alternate space to them? Why couldn’t the tent have been put somewhere else? People can’t visit the expo if they have no place to park.

And these kinds of ridiculous decisions take place everywhere in Pakistan and the civilians are meant to be accommodating about it.

Of course. It’s a matter of national security. Why don’t we understand? It’s only for our protection.

And we have no choice but to abide by those calling the shots in this cursed poverty stricken country with an inept political system.

Anyway, not long after, I saw huge containers arriving in front of the Expo Centre,  the Rangers’ personnel shouting on the shuddering car drivers to stop and give way, while instructing the container driver in an awkward Punjabi-Urdu accent ‘aan deyyo’ (let it come). These containers were then stored inside, beside the fence of Expo Centre. My worst fear had come true. One of the bystanders commented, “it has begun” as if indicating the happening of a natural calamity or disaster.

And that is exactly what happened, just as suspected. Yesterday, the first day of the Expo, brought with it a plethora of problems. Not only was the event a nuisance for the people wishing to attend, it was problematic for those who were just trying to navigate through their daily routine. Broken roads inundated with knee-deep sewage water were used as diversions, which were not controlled by traffic policemen. Public buses and rickshaws were also stopped from using certain streets in the city. Despite the promise made that University Road would not be closed, it was closed for about two hours, resulting in even more traffic clogging the streets. The extra traffic police force, which was assured by the traffic police, was also nowhere to be found on the alternative routes.

Such promises are made every year. But, hey, when have any of our government departments ever been keepers of their word?

It’s pretty evident that no amended traffic route will be our resolve and these issues will keep plaguing the public till the event comes to a close. In other words, the entire population of the city should just brace itself and continue going through absolute mental torture and frustration for the next few days!

Every year when IDEAS arrives, we witness a repeat of confused citizens running out of ideas regarding which route to take. While the influential people, including the military leadership, present our proud productions to the representatives of the more civilised countries, normal citizens outside lose hours of productivity. Children can’t go to school, patients don’t reach hospitals, and office workers don’t reach their jobs on time. This is caused by the gridlocks made in order to ensure the safety of all those attending the great IDEAS.

Inadequate traffic management on the traffic police’s part, blocked roads, and the insensitive/unconcerned attitude of those involved, are all factors that contribute towards making IDEAS a terribly bad idea, while also forcing the civilians to boil with anger and blame the ambitious Expo endeavour. Hardly anyone I know from last year had anything positive to say about this exhibit and, why would they? The geniuses from the military and the government have robbed them of any reason to think otherwise.

I wonder if those involved in IDEAS management ever ask their customers if they conduct such exhibitions in their country. And if so, do they block all modes of travel in the name of security?

I do realise that we live in times that require extreme security measures to be taken, but please don’t tell me that security cannot be made possible without adding misery to the lives of thousands of already drained, depressed, and exhausted citizens. Because, while our rulers and men in boots enjoy after parties, dinners, and drinks in air conditioned halls, thousands of civilians outside are stuck in traffic in the heat. And such feelings of helplessness fuelled by such humiliating circumstances transform into resentment towards this endeavour.

It does not matter then, how many slogans they shout of an “impenetrable defence” and a strong Pakistan. While the appalling state of the public continues, they should be assured that people consider these to be nothing but shallow dialogues.

How many years or decades have to pass, before we get to have someone sensible enough to understand these basic issues and take care of them?

The negligence and carelessness displayed by both the military and the government, shown in this matter gives much credence to the notion that they don’t really care about us. All they’re really fixated on is to further their own personal agendas and the VIP protocols they receive for events such as IDEAS, where the common man does not even dare to enter. Though they accomplish all this with taxpayer money and in the name of the nation, it is ironic that the same taxpayer, belonging to the same nation, suffers as he has no idea or vested interested in regard to what’s happening inside the Expo. His focus is solely on finding an alternate way around and swearing out the VIP’s as he struggles to do so.

On one side, one-third of the total Pakistani population lives below the poverty line; they do not have sufficient food to eat or access to healthcare facilities. On the other hand, exhibits such as IDEAS seem to make fun of their deplorable condition, even though its managers promise to bring progress to the country.

The government manages to earn a significant amount through the IDEAS exhibit. But if time and time again, they’re unable to manage the (expected) traffic situation, it really means nothing. Those flashy guns, ammunition, aircraft destroyers – what good are they if they can’t bring any change in the lives of the common man? You can’t feed the poor with weapons.

It’s obvious these guns are only there for pretentious reasons. We hardly ever see the latest weaponry in the hands of the police who are meant to protect the lives of civilians every day. They are still forced to carry decades old rusted Ak-47’s that don’t seem to work. These advanced rifles are to be exclusively used by our “jawans” and specifically those SSG guys, while ordinary third-grade policemen just don’t deserve to carry weapons of such high calibre – they should simply fight terrorists relying on obsolete guns, should they work! This too, in the country that produces and presents advanced weapons systems such as air defence weapons, propellants, mortar ammunition, drone missiles, and even tanks on an annual basis.

IDEAS draws more scepticism than support from people, as you can expect when you practically shutdown the lives of a huge number of people and, that too, for one whole week, as well as affect the daily routine of the whole city. It is high time for IDEAS to either be shifted to an alternate location, where the roads do not require any blockage or it should not be conducted at all.

The whole concept behind IDEAS seems to be an expensive show that is reserved for the elite and presented by the elite. This whole drama needs to stop now; people have suffered enough for the last few years.

This exhibition brings about no change to our lives other than the agony it adds to it. People couldn’t care less about it, whether it happens or not, since they aren’t ever invited and their presence is unwanted in the premises of this so-called exhibition, quite the same as when dogs are not allowed in some places.

Although the place is swarming with the proud elites, I would like to urge them to be merciful towards the civilians and ask the men in boots to shift their party somewhere else, without bothering us.