Was it truly necessary to suspend Misbahul Haq right now? 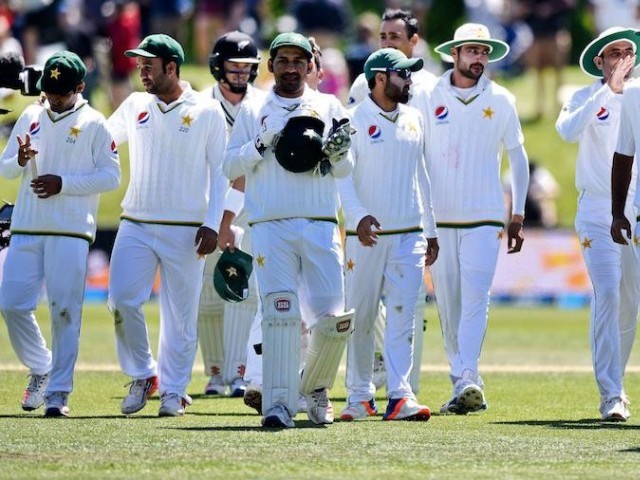 Pakistan lost its first Test series in Christchurch after seven consecutive Test series. Tours to New Zealand and Australia have always been tough for Pakistan. After Pakistan’s unsatisfactory performance in Sharjah against the West Indies, there have been doubts regarding our batting line up against New Zealand and Australian conditions; thus resurfacing and strengthening the fear that the Pakistani team will struggle in such trying conditions.

Misbahul Haq is a legend in the current team. He has played many match-saving and match-winning innings for Pakistan. His captaincy and batting ability is the reason why Pakistan is placed in the top half of the Test playing nations’ ranking charts. Misbah has been our rock of Gibraltar for the last few years but unfortunately, in last few Test matches, he was bowled out while playing loose shots. It is a shame that, as a result of this performance, Pakistan will go into the second test without their captain Misbahul Haq who has been suspended for one Test due to the slow over-rate in this match. The ban imposed on Misbah showcases the unprofessional attitude of the players. I hope the team, as well as the management learn from this error and avoid such minor infringements in the future, as they could prove to be just as vital in the shift between victory and defeat.

The ban being imposed on Misbah in this particular match on the tour, however, is a blessing in disguise, as he was already going to miss the match at Hamilton due to the sad demise of his father-in-law. Misbah will return to lead the team in the rest of the Test matches on the Australian tour and I hope the players and management all play their part and avoid fines and suspensions due to a slow over-rate.

Misbah needs to rethink his shot selection. We are expecting long innings from him during the current tours of New Zealand and Australia. I sincerely hope he reassesses his strategy and continues his good work with the bat for the national team.

But Misbah is not the only person to be blamed for how the match turned out; the other players also failed to perform. Pakistan’s first inning was poor as their top four players only managed to make a total of 43 runs. The last time Pakistan performed this poorly was in Johannesburg during the 2013 tour of South Africa, when Pakistan’s top four added less than 50 runs in their first inning.

Pakistan’s batting was unable to stand up to the Test New Zealand put forward in its first match. It is ironic that Pakistan batted for many overs in both innings of the Test match and yet was unable to score runs at a decent rate. Pakistan’s run rate in the first inning was 2.38 runs per over, and in the second inning it regressed to 2.17, even after the impetus provided by tailender Sohail Khan, who scored a whirlwind 40 runs.

After the failure of the batting line up in the first inning, it was the bowlers who were able to reel the team back in to provide them with some chance of fighting back. Everyone expected Pakistan’s batting to be better but unfortunately that was not the case.

Rahat Ali nervously settles under the ball at fine leg to send back Colin de Grandhomme.

When a batsman who is coming to bat in the ninth position, turns out to be the highest scorer of the inning, it verifies the notion that there is something seriously wrong with the batting line up. This indicates a lack of determination by the top order, particularly by the openers who were only looking to survive. This strategy is regressive as it results in openers that play 18 overs yet score only 21 runs. I agree that the conditions were tough but even in rough batting conditions batsmen should find a way to score at a decent rate. The openers need to learn the art of maneuvering the balls.

Azhar Ali is a senior batsman now. His role is to stay stationed at one end so the other cricketers can play around him. But instead, he ends up blocking the others entirely. This resulted in him making only 31 runs out of 173 balls. Things could have ended differently for the team if he had scored 60 or 70 more runs within the same amount. This defence strategy of blocking balls will tire the opposition, but not put them under pressure. To pressurise the opponent, one needs to score runs.

Azhar Ali sits on the floor after losing balance against a bouncer.

Azhar and Babar Azam scored 37 runs in a second wicket partnership that lasted 137 balls. During this partnership, an inexperienced Babar displayed some effort by scoring 29 runs from 66 balls whereas Azhar was only able to score five runs from the 71 he was dealt with during this partnership. Babar’s efforts helped Pakistan reduce the deficit and set the example that one can score runs if one aims for it. I suggest that Azhar, if he is not comfortable as an opener, should be shifted to third position and instead promote Babar as an opener.

The way Younis Khan has been performing, I believe his reflexes are slowing down. He has been bowled out while playing some ordinary shots in the last few Test matches. Younis Khan is a legend yet we want him to be honest about his fitness and ball sighting ability.

Sarfraz failed at batting during the 2012 South Africa tour. As a result, he was dropped from the team. He worked on his weaknesses and, after two years, came back stronger. He is a senior player now and an integral part of the national team in all three formats. He needs to understand his responsibilities; he bowls out when playing loose shots on various occasions in the last few Tests. It’s high time he understands the difference between playing aggressively and playing carelessly. In the second inning, he got out on a good ball but during the first inning he played a careless shot. He was bowled out to similar shots in England on a few occasions. At a crucial stage, he played a loose shot in the second inning of the Sharjah Test and cost Pakistan the match.

I hope the management sits down with him and explains his role to him with clarity. Sarfraz should also work hard on his weak areas and try to contribute more regularly with the bat.

Asad Shafiq also needs to work on the areas he’s lacking in. Asad blossoms when he is partnered with Misbah or Younis while batting, but often fails to deliver when he needs to hold the reins of the innings on his own. Pakistan needs Asad, now among the list of senior players, to be more consistent in his performance in the upcoming months.

Sohail Khan also exhibited a strong commitment; his stroke play had the New Zealand captain worried, as he had to send his players across the field. This should be an added example of how one can relieve the pressure on the batsmen themselves by scoring runs. I suggest that Pakistan replace Rahat Ali with Wahab Riaz and Muhammad Amir with Sohail Khan in the batting line up in the Hamilton Test.

Sohail Khan is congratulated by his team-mates after dismissing Colin de Grandhomme.

The conclusion I have drawn is simple – Pakistan needs to understand that surviving a match is not the only element of necessity, scoring runs is essential and the primary goal that the team should be focusing on. Recently, there have been so many examples where fast scoring has changed the direction of the match. The on-going series between Australia and South Africa is a perfect example of how scoring quickly can pressurise the opponent.

At Pakistan’s recent tour of England, Bairstow and Moeen Ali, by scoring rapidly, put pressure on Pakistan and allowed England an ample amount of time to bowl out Pakistan and inevitably win the match.

Pakistan’s next stop is Australia, a team that is also facing a batting crisis these days. This will be a good chance for Pakistan to get a taste of success, but for that to happen, the batting line-up needs to be rearranged.

In the past, Pakistan has bounced back from their defeat on the New Zealand tour. Their ability to do so is pivotal in their dominance over New Zealand who, for more than 41 years, has been unable to beat Pakistan in a Test series at home ground.

I hope the management will do a lot of soul searching and the batting line will be amended by learning from previous mistakes. They must come up with a better strategy to counter the Kiwis and deliver some powerful counter punches to level with others in this Test series.