“People are dying” because of the bad healthcare system, not the YDA protests 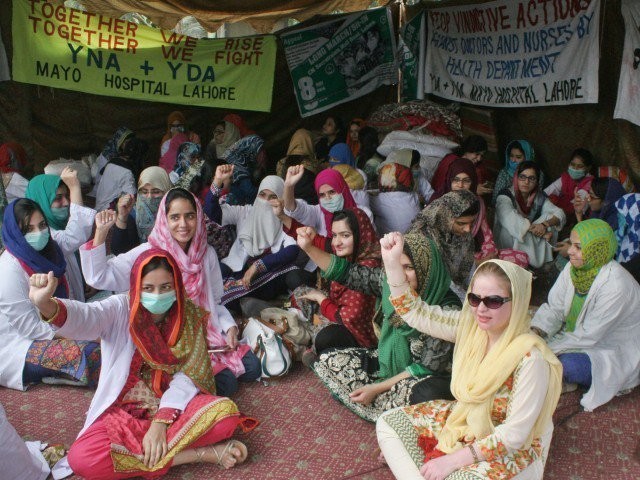 Doctors are holding protests against the health department on call of YDA. PHOTO: PPI

You may put your mind at ease, because I will be singing no undue odes to the greatness of the ‘noble profession’ and all those who are a part of it. But there are more than a few reasons to empathise with the protesting doctors, a few of which I feel compelled to state.

A recent blog on this site passionately listed the reasons for the author having no sympathy for the Young Doctors Association (YDA) doctors and their recent activities in Lahore. As a person who is closely linked with the medical community, I find it necessary to revisit some of the arguments made by the author.

1. You may not like medical students; but you still need them.

Acknowledging the obvious tongue-in-cheek nature of the argument, I might pile on and admit that I am not a fan of medical students either – despite having been one myself. But if, by some anatomical misfortune, you are scheduled for an elective surgery for a hernia next year; or should you require pain medication any time in the near or distant future; a discussion on the likeability of med students is moot. You cannot have medical practitioners without medical students.

Pakistani healthcare system is not without its flaws, and admittedly, these flaws may be fatal. In government hospitals, there is a lot left to desire concerning available equipment and the number of medical personnel on duty; and the dearth of each could result in both grouchiness among the staff, and poor management of the patient. But a part of the YDA protest is to help improve work structure that would potentially improve service provided to the public.

Frankly, the healthcare staff could benefit from additional courses on patient counselling – an art that is severely underestimated by most Pakistani doctors. It is not often that doctors turn out to be “butchers” (read: malpractice), but are more likely to simply fail at properly communicating with the patient and his family about the procedural risks involved, or the requirements for carrying them out.

Still, it ought to be obvious why it is improper to use anecdotal evidence of doctors’ clinical incompetence as reason for dismissing their protest.

3. We are a poor country – at the most convenient of times

We are a poor country, undoubtedly. Though we can conjure money out of air for the lavish automobiles for important officials’ motorcades, and write increasingly bigger cheques for military spending; we are an especially poor country when it comes to paying the workers a fair wage for their service – whether it is the blue-collar worker at a sugar mill, or a skilled labourer at a chemical plant.
Yes, doctors are supposed to work night shifts – not to mention that shifts in Pakistan are more hectic than they are in most countries. They are also supposed to get a fair pay for the unenviable service they provide.

It depends on who you are asking. Many women did not have nice things to say about suffragettes either when they first protested for women’s voting rights. I am not necessarily comparing YDA protests with the suffrage movement, but surely the YDA does not need unanimous popularity for its demands to be legitimate.

5.  Yes, YDA has advertised itself poorly

It is not that the YDA demands about work and pay structure have no merit. And it is plausible that government-influenced mainstream media sources may have reason to misreport or under-report YDA’s struggles and demands. But I have to concede that the organisation has done a poor job at getting its message across to the public in a comprehensible way. I have personally attempted to contact the YDA social media groups and key figureheads multiple times, and I have either received varying responses or no response at all.

6. “People are dying” – from a bad healthcare system

Industrial action by doctors was not pioneered by the YDA. In the UK, junior doctors have been protesting for a long time – resulting in numerous walk-outs and hundreds of thousands of appointments being cancelled. During two strikes in April, the British doctors even walked out from the emergency departments, which generally stay open even during industrial action.

The Hippocratic Oath is not intended to orchestrate a hostage situation for healthcare workers. 52-hour work duty? Heck, make the doctor work 152 hours without pay and with no work benefits. He can not leave because “people are dying”. He can prevent exhaustion by listening to Dil Dil Pakistan on repeat, and feel reinvigorated by the thought of working for the betterment of our great nation. What more could this charitable automaton possibly ask for? A nice future for his own kids?

Yes, people are dying because the neurologist injecting a needle into your spine has not slept in 49 hours. And it is time to offer him a respite.