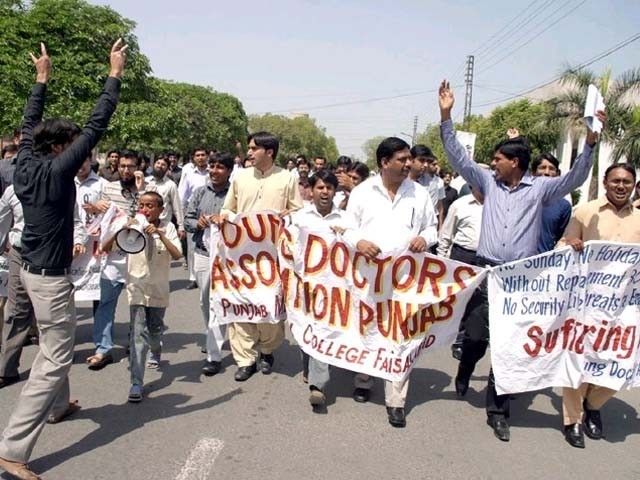 Many attest to you leaving your posts unattended or shunning long duties that have always been the norm. PHOTO: FILE

The Young Doctors Association (YDA) has been protesting for years now and people are just as unsympathetic (and in some cases, downright critical) as they have always been. Why though? Why can’t doctors catch a break? Heck, even Sheikh Rasheed managed to pull a Mission Impossible and drum up a following. And here we have the country’s cream, begging to be understood.

The YDA recently ended their five-day sit-in in Lahore after successful negotiations with the Mayo Clinic chief executive. According to the YDA, the protest was called off on humanitarian basis. However, according to health authorities, the sit-in was called off due to the termination of protesting doctors and nurses for not showing up for their jobs at the hospital.

I spent the last week speaking to people about the YDA protests and now present a summary of why they’re not taken seriously. So dear YDA, some of these may sound like a joke, but they are genuine obstacles to whatever it is that you are trying to achieve.

Let’s face it; the pressure to break into the medical profession is intense. Every single person has been presented the doctor ‘option’ by their parents before their matriculation. I say option but really, I mean gospel, absolute-word-of-law, you-get-into-a-med-school-or-die etc. You get the point. A lot of us have tried. Most of us have failed. Most of us have had our doctor cousins rubbed in our face. Most of us have been passed over by rishta aunties for not being a doctor. Some of us have been passed over by our parents for not being a doctor. It hurts. It wasn’t so bad when the only medical colleges were government institutes, but now, with the rise of private medical degrees, it’s just turned into one more line that the very rich can cut.

2.  Everyone has a butcher-doctor story

Everyone has bad experiences with doctors to share. I understand that you are not always to blame for complications, but many people speak of callousness, of a disregard for life that is shocking. In an effort to avoid the label of ‘sunni, sunnai baat’, I’ll give you a personal example.

I was once rushed to services hospital after being injured in a car accident and remained unattended and bleeding for about 20 minutes.

That’s not the story.

On the bed across from me, a child lay dying and his parents had spent all this time rushing about looking for a doctor, any doctor. When the child’s father lost hope and began to recite the Kalma in a loud voice, a gentleman, who had been wandering around the ward all this time, produced a white coat out of nowhere and flapped towards the bereaved family, telling them that it was their fault for bringing in the child too late to save him. Needless to say, I took my bleeding face elsewhere.

3. We are a poor country

Every non-doctor I’ve asked about the YDA protests is particularly testy about the fact that our health budget is not a secret. Government jobs do not pay a lot. Why do you enter the medical profession at all if the low pay-scale and long hours are a problem? Aren’t doctors supposed to have night-duties? We don’t see traffic wardens acting all high and mighty about directing traffic on a July afternoon. You finally have the prestige of the title, why do you think that the more successful of your seniors got to where they are without putting in the work?

4. Other doctors don’t have nice things to say about you

Seriously, they don’t. Several doctors complain about how the YDA is simply trying to get a bigger slice of the pie and are making an issue about nothing. Many attest to you leaving your posts unattended or shunning long duties that have always been the norm (not to mention an excellent learning opportunity). Your own brethren don’t understand you guys.

5. We don’t know what you’re protesting about

What are your demands? What are you protesting about? If it’s better working conditions and more security then you’re not at the front of the queue for that at the moment. Some people have vaguely told me that they have heard from someone that you guys haven’t been paid for a year. If that’s true then in the age of #ChaiWalas and #QandeelBaloch, you’re doing a very, very poor job of getting your message to the public. The media is not presenting you in a very positive light and there is nothing on the average person’s social media timeline about you. Could that possibly mean that you’re not serious? Or are you being deliberately censored? Or it may simply be that you’re being drowned out by other stories.

Most people in Pakistan are stuck in meaningless, grinding jobs that allow us to barely stay afloat in the social strata that we were born in. But when you go on a strike, people die. So now, not only has a great deal of good feeling for you eroded, but also, people who had previously not paid any attention to your protests at all are angry at your attitude. I’m pretty sure that in this case, no publicity is better than bad publicity.

This post may sound extremely callous (but more callous than shutting down hospital emergency wards?) in the face of your grievances, but remember that it is public opinion. Unless you address at least some of these issues, you’re not going to be getting very far. Ramp up the media campaign. Lower your standards and try chumming up to all the computer-science, journalism, and English literature cousins who you have ignored for so long. Have you thought of perhaps joining forces with a couple of political parties? I hear that the various factions of Muttahida Qaumi Movement (MQM) are hiring.