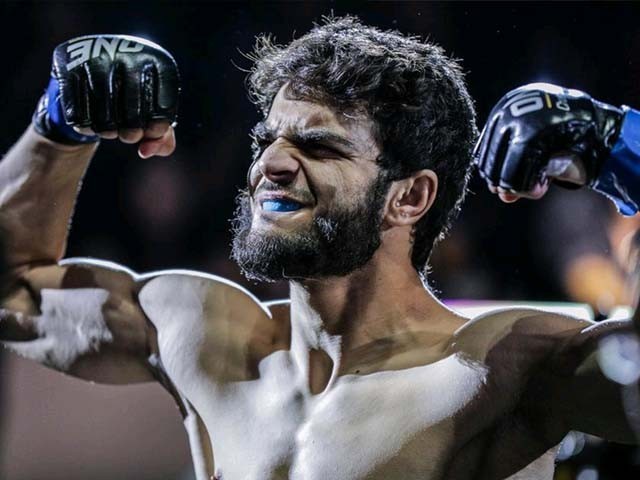 Despite being ignored, Mujtaba didn’t lose hope and kept on training for his debut in Asia’s number one MMA championship ONEFC. PHOTO: FACEBOOK

His heart was racing. His feet were rising and falling to the roar of the crowd. He was like a beast in a jungle; fighting against a worthy opponent for dominance and glory. He knew he was a few minutes away from winning, just one more kick, one more punch and he would win a fight on one of the biggest MMA platforms in Asia.

He was even closer to winning the fight.
Photo: Facebook

Finally, the moment everyone was waiting for, the moment he had worked so hard for, had arrived – the result. He had won – and the decision had been unanimous. It was a proud moment for him, though in his heart he knew this victory wouldn’t make much of a difference back home; he’d remain unappreciated and on his return home, he’d only find a few teammates and friends giving him a heroes’ welcome home.

You must have guessed who I’m talking about by now. If you haven’t – it isn’t your fault. Ahmed Mujtaba has been completely ignored by the mainstream media, thus most people are still unaware of his achievements. Mujtaba is a professional Mixed Martial Arts (MMA) fighter and has won many laurels for the country with an undefeated record of seven wins.

This just goes to show that instead of promoting the sport and the man who championed it, TV channels and the media want to exploit the Indo-Pak relationship in every way they can.
Photo: Twitter

Earlier this year, Mujtaba, along with his teammate Uloomi Karim, went to fight in the Underground Battle Mixed Martial Arts (UGB) championship. Mujtaba was victorious there as well.

But guess who received recognition from the mass media? The one who had an Indian opponent (Karim).

This goes to show that, instead of promoting the sport and the man who was victorious, TV channels and the media want to exploit the Indo-Pak relationship in every way that they can. Our people’s motive of interest in every India-Pakistan related sport is questionable.

In his heart, he knew this victory won’t make much of a difference back home.
Photo: One Championship

Despite being ignored, Mujtaba didn’t lose hope and kept on training for his debut in Asia’s number one MMA championship ONEFC. His opponent, Benedict Ang, was no easy prey as he, too, was undefeated. That is, till he faced Mujtaba. His win was impressive considering that his training comprised of limited resources and no international coaches – unlike his opponent.

I, along with the majority of the MMA community, was hopeful that this time Mujtaba would finally receive the attention he deserves, since he is the first Pakistani fighter who was trained in Pakistan to win on such a prestigious platform. Yet, we were all left disappointed; apart from a few newspapers, no major channel deemed it necessary to cover.

He is the first Pakistani fighter trained in Pakistan to win in such a prestigious MMA promotion.
Photo: Facebook

In a country where even the pettiest of issues become newsworthy – it’s shocking that Mujtaba’s win was not given even a quarter of prime-time or a place in the midnight news. Our desperate journalists would rather obsess over a chai wala for his looks!

According to his head coach and trainer, Ehtisham Karim, Mujtaba has approached all TV channels and their representatives to urge them to pay attention to this sport but they just don’t seem interested. Media outlets dedicate hours to cover cricket events. We have become immune to the mindless narration of cricket play by plays by people who don’t even have any experience in the sport, and frankly, no one is interested. The same media does not have place in their headlines for a real national hero.

A visibly disappointed Ehtisham Karim, in his video message, made it clear that he doesn’t expect anything from the government, as they seem engulfed in their own problems like handling corruption charges and making a fool out of the public, but he does expect the media to recognise Mujtaba’s talent. He feared that, once again, he’d have to go to the airport with only a handful of friends to welcome Mujtaba – a complete opposite to how a cricketer is welcomed back after a win. He appealed to the people to share his message as much as possible and to pressure the media to acknowledge the unsung hero.

The government comprises of age old bureaucrats who still live in the 90’s. They don’t even use social media, let alone being aware of the latest developments taking place in the world. Therefore, they cannot understand the importance of MMA, given that it’s a dynamic sport that has excluded most of the rules of traditional martial arts and taken the world by storm. Even if the concerned government officials did understand MMA, they wouldn’t be able to do much about it, since the government only focuses on Olympic sports and spends most of its sports related funding on cricket.

Mujtaba’s repeated warnings to leave the country and move elsewhere because of the lack of support he received from Pakistan should be a wakeup call for us.
Photo: Facebook

What message are we sending to our young and upcoming talent? It doesn’t matter if they partake in sports or any other field? Wouldn’t they start believing that the only way to become famous and gather respect in this country is to be born with good looks? Is there no place for talent and hard work in this country? The more dishonest and corrupt a person is, the more recognition he or she receives. We saw this happen with people like Ayyan Ali and Qandeel Baloch. What did they do to become famous?

If we don’t act now, if we don’t change the circumstances that destroy the dreams of many, we can say goodbye to any hopes we might have of achieving glory as a nation.

Mujtaba’s repetitive statements about leaving the country to move elsewhere where his efforts would actually be appreciated should be a wakeup call for all of us. We should realise that it is people like Mujtaba who make a nation rise above others and not plastic celebrities whose lives we all seem to be oh-so-interested in.