Why aren’t there any well-equipped ambulances available in Karachi? 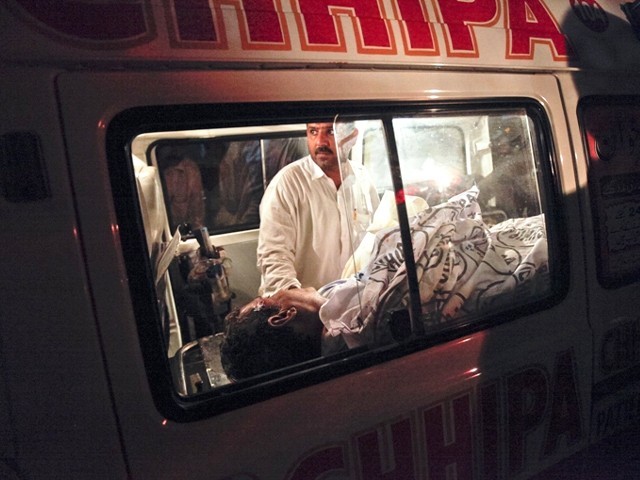 If a person is injured and bleeding profusely, ambulances here do not have the kind of equipment and first aid or trained staff who can control it. PHOTO: REUTERS

A few years ago, my cousin passed away in Gwadar. His wife had to transport his body from Gwadar to Karachi in a Toyota Hiace because she could not get hold of an ambulance. That memory resurfaced when I heard that ambulance services were unavailable to carry the dead bodies of the martyred cadets in the attack on the Police Training Academy in Quetta.

Even if one tries to justify the legitimacy of such issues by claiming that Gwadar and Quetta are ‘remote’ areas, why is there a shortage of ambulances in Karachi and in other developed cities of Pakistan?

Apart from the shortage, another imminent problem is that the ambulances that are available are not stocked with any life-saving equipment. Only Aman Foundation’s ambulances are equipped with crucial apparatuses and machinery like oxygen cylinders, a defibrillator, suction machine, splints, a spine board, collapsible stretchers and nebulizers.

It is such a pity that ambulance services that do exist (like Edhi, Chippa, Khidmat-E-Khalq, Saint Johns and many others) do not consist of proper oxygen cylinders. Even though, NGOs and the private sector are making significant contributions towards the health sector considering that the government, on both the federal and provincial level, seems the least bit bothered. However, the rapid increase in the city’s population and its unplanned expansion indicates that we require massive funding and investments in the health sector to cater to the medical needs of all citizens.

For a city like Karachi which has a population of more than 16 million people, we have a limited number of hospitals and most of these hospitals are far away from various residential areas. In this scenario, we need more high-tech ambulances so they can transport the patient to the hospital – alive. Currently, most ambulance services operating in the city are only good enough to carry dead bodies from one place to another.

In many cases, first aid can save lives on time and prevent a patient’s health from deteriorating. If ambulances are equipped with paramedics and proper first aid equipment, they can be conducive in providing first aid to patients’ onsite as well as treat minor problems, thus serving as a much required life-saving resource. Only critical cases will be transferred to hospitals, and in such cases, the availability of first aid resources in ambulances can reduce the burden on hospital staff, helping the patient receive treatment properly and on time.

Most of the ambulance operators use Suzuki Hi-Roofs, which is an inappropriate vehicle to use as an ambulance due to its small size. It also holds the risk of the vehicle being overturned due to high speed. At Shah-rah-e-Faisal, I, myself, have witnessed a speeding ambulance carrying a patient that had overturned.

The unavailability of air conditioners in ambulances adds on to the nuisance for patients especially during the hot summer days of Karachi.

The Aman Foundation’s ambulance service (which became operational in 2009) is relatively better but they only have around a hundred ambulances and are unable to provide their services efficiently all over Karachi. Moreover, Aman ambulances can take as long as 30 minutes or so in reaching their destination after they are first contacted.

As Aman Foundation’s ambulance services are rising in demand, they struggle to maintain their standard. Most of their ambulances are not equipped with air conditioners. Their charges are also mind boggling; they charged me Rs300 from home to the hospital, but the fare skyrockets to Rs2000 if the ambulance service is availed in order to take the patient from a hospital to one’s home. On inquiring about the disparity in charges, I was told that the amount was set this way on purpose to avoid the misuse of the ambulance service.

Having said that, hospitals in Karachi don’t have proper ambulance services and even the ones that do are not ready to facilitate patients. After admitting a family member in the best hospital of the city for more than a month, we made use of Aman Foundation’s ambulance service to transfer the patient back home as their rates were lower in comparison to the hospital’s own ambulance service. It was disheartening to see that despite receiving such huge amounts from us for treatments, the hospital’s management showed no courtesy in transferring the patient back home free of cost, or at even a reasonable fare.

In lieu of Karachi’s unplanned expansion, proper ambulances stocked with life-saving equipment are the need of the hour. I hope that, along with the private sector, the Sindh government finally takes an interest in this matter and initiates an ambulance service in the city in line with the Rescue 1122 service operating in the province of Punjab.