Did the biased media coverage of the US elections ensure Trump’s victory? 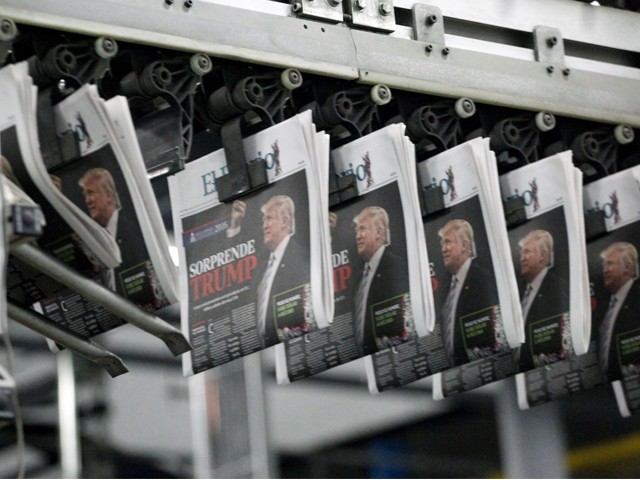 Freshly printed newspapers with the headline reading ''Trump surprises'' are seen at a conveyer belt at a printer of the local daily El Diario of Juarez in Ciudad Juarez, Mexico, November 9, 2016. PHOTO: REUTERS

On April 6, 1994, a missile shot down an airplane carrying Hutu leaders Juvenal Habyarimana and Cyprian Ntayamira in Rwanda, unleashing the ethnic majority Hutus against the minority Tutsis on a campaign of mass murder. As the atrocity spread, the world debated the nuances of the word ‘genocide’. Three months and at least half a million deaths later proved that, yes, it was genocide. Semantics matter. During the 2016 US election, mainstream media’s refusal to correctly identify bigotry, while perhaps not as egregious as mislabelling ethnic cleansing, has contributed to Donald Trump’s victory. Semantics matter.

Trump’s detractors, and count me as one, remain perplexed. We can’t blame the Republicans, they won. We may ponder hypothetical scenarios: what if Gary Johnson had run a stronger campaign and pulled votes from Trump? Or Jill Stein simply ceased to exist? But this does not explain how the media alienated voters.

What does Ms Gay mean by racist?

The mainstream media’s default “you’re a pathetic racist” argument hammered this message in Trump’s minions, as if they would realise their racism and convert. But when everything is racist, nothing is.

Are many Trump supporters prejudiced?

Ms Gay and her media cohorts implied, nonstop, that if you want to vote for Trump, unlike her, you were an anti-progressive bigot.

“Trump won because he convinced a great number of Americans that he would destroy political correctness.”

Regular folks in America care about affordable health care, raising their kids, and financial security. They do not care how these issues affect race, sex, and gender. The left, however, obsess over identity. Nowhere was this more evident than on college campuses where the younger generation created the Social Justice Warrior (SJW), an Orwellian caricature that demands neo re-education camps resplendent with ‘safe spaces’. In their view, too often, minorities are helpless victims, police are racist, and acts of terror by Islamists are not as bad as Islamophobia. Even climate change could not escape, as we now have to worry about ‘Feminist Glaciology’. These SJWs invented dozens of gender pronouns and championed resistance to faux evil’ in the form of micro-aggressions, stating that ‘Blue Lives Matter’ or championing a meritocracy became a hate crime. Sharing culture used to be mutually beneficial, but turned into a sub-category of racism aka cultural appropriation. Muslims who condemned Islamism were labelled ‘House Arabs’ or ‘native informants’. Free speech was championed as long as it did not offend marginalised groups, and hence, we lost freedom to speak. And now these same college students take to the streets in protest, befuddled as to why Trump won.

As SJW nonsense propagated, Trump mobilised. Hillary Clinton had little control over the media, but she could have recognised these problems as tangible and significant. She didn’t. Instead, she pandered to the faithful on important but less crucial issues such as abortion and gay marriage.

The mainstream media, shocked and disappointed as half the country, can only blame themselves. They created an escalator of perpetual accusations of bigotry. If they want Trump in office for four years instead of eight, they need to challenge and dismantle the PC narrative, and give their readers both sides of the editorial coin. When they call someone a “racist”, they better make sure that that person believes in the superiority of one race over the others. Wearing a sombrero is not an act of racism. Semantics matter. Just ask the Rwandans who lived through the spring of 1994. Rwanda, as we tragically discovered, showed that if we don’t call it genocide, we don’t treat it like genocide. And today, if we won’t call Islamic terrorism “Islamic terrorism”, we won’t treat it as such.

“Instead of challenging this ideology of shame, the left has buttressed it by blaming white people as a whole for slavery, genocide of the Native Americans and a host of other sins, as though whiteness itself was something about which people ought to be ashamed.”

When the left and the media reduce people to the lowest common denominator, they convert no one. If anything, they push people to the other side. But if they recognise the flaws of their narrative, they may produce a more cogent one in the future. Hopefully, Roxane Gay and her friends from the media are paying attention.