There is no genuinely liberal political party in Pakistan today 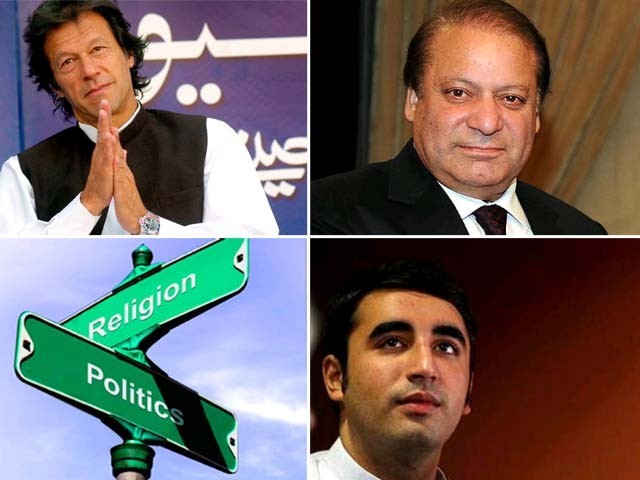 Pakistan by no stretch of the imagination is still a “moderate” country with adequate presence of liberal narratives.

At times, the electoral landscape – which by the way is still dominated by apparently moderate parties – is cited as an example of Pakistan’s resilience against growing fundamentalism. It is often claimed that Pakistan has never voted for religious parties and this is trumped as some kind of evidence of moderation or even quasi “liberalism”.

Without sounding over pessimistic or critical in a self-fledgling kind of a way, I beg to refute this perception. I think the electoral landscape is misleading. Yes, while it is true that Pakistan has not become Iran, it is by no stretch of the imagination still a “moderate” country with adequate presence of liberal narratives.

It is not that moderates do not exist. As I write these sentences, they still form a huge majority. It is just that due to a series of complex developments, both international and domestic, the political as well as public space is being ceded to religious right reactionaries, and ultra-nationalists. As they take the centre stage, it is their discourse and their narrative which is overwhelmingly dominant. This narrative is nationalist, believes in aggressive foreign policy centred on a deep mistrust of the outside world (barring China and Islamic countries), eulogises military and assumes that nuclear arsenal is a prized possession giving Pakistan a kind of prestige and invincibility. This narrative has created a collective mind-set which is deeply resentful of any liberal who is critical of state positions.

There is no effective liberal counter narrative today (a few articles in the English press cannot be considered as a narrative), only various strains of right-wing explanations and ‘solutions’. Some of these take a religious tinge while some apparently come cloaked in ‘modern’ jingo. However, virtually all are serving the right-wing agenda. Consequently the population, particularly the urban population is increasingly becoming ideologically homogeneous.

This absolute dominance of right-wing narrative means that political parties also have to make adjustments to remain ‘relevant’. Being right-wing is no longer a matter of political orientation but of basic survival. What has happened is that virtually all parties have moved towards the right side of the political spectrum while maintaining their mutual differences. Pakistan Muslim League-Nawaz (PML-N) has always been a conservative party and remains so despite some commendable legislative initiatives such as the passing of the women’s protection bill. Today Pakistan People’s Party (PPP) is liberal only in the relative sense and perhaps could be rightly termed as only the “least” right-wing of all the major parties. What has actually happened is that as the ideological atmosphere has become more religious and nationalist right, all the parties in order to be “viable” have made adjustments.

Thus one is not surprised that Awami National Party’s (ANP) minister, Ghulam Ahmad Bilour, once promised $100,000 to anyone who can kill the director of Innocence of Muslims. Now ANP is Khan Abdul Ghaffar Khan’s party, which even during the Soviet occupation of Afghanistan (struggle against which was trumpeted as a “just” holy war even by the US) voiced its continuous opposition against the Afghan Mujahedeen and rightly called the Afghan resistance a misguided war. When a minister from a secular party like ANP starts offering bounties like this, it is more than clear which way the wind is blowing.

And as the urbanisation grows and the rural majority is eroded, the shape of the politics will veer away from traditional constituency based politics (which is characterised by caste, kinship and local ties) towards ideological driven politics. In general this is a good development but in Pakistan’s context, I am not really sure as there are no liberal alternatives or even narratives. The urban society unfortunately makes radicalisation much easier as the structure is conducive to ideological influences. In an ideologically heterogeneous society, urbanisation can result in a host of possibilities, including some really progressive ones. However, where there is just one kind of ideological narrative, this may spell doom.

In fact, as the rise of PTI clearly demonstrates that growing urbanisation actually becomes a modus operandi for the promotion of right-wing and ideologically reactionary politics. Imran Khan’s political rise is not just a product of the so-called establishment but actually owes a lot to dominance of various strains of just one kind of narrative. Imran Khan articulates and in fact ‘sums up’ all the strains effectively and has been able to bring varying ideological groups of the same side of the political spectrum under one umbrella. His ‘success’ in the urban areas, particularly of Punjab, has merely forced all the other parties to adopt similar stance.

An overwhelming number of PTI followers, hails from urban areas and are young and yet we hardly find any progressive voices emerging from them. If anything, they hate Malala, think that liberals like Asma Jahangir and Marvi Sirmed are traitors (just see the Twitter account of these two as well as other liberals and you will find most of the trolls abusing them are from PTI), and that Pakistan’s problems pertaining to religious extremism are a result of deep conspiracies of the foreign powers. We hardly hear anything substantial from them regarding women’s rights or protection of minorities. Instead the overwhelming concern is just with the word “corruption” followed by nonstop glorification of the armed forces and disproportionate focus on issues related to foreign policy. In fact, their leader Imran Khan once even called liberals the scum of the country.

Whereas in an ideologically diverse polity, political parties can select their ideological niche from a large number of positions (from both left and right) in Pakistan due to absence of a counter liberal narrative, political parties are just jockeying for various right-wing positions. It is small wonder that at times Bilawal Bhutto, although the most liberal in outlook, had to raise “nationalist” concerns while campaigning in Azad Kashmir. In fact he even went to the extent of calling Nawaz Sharif, “Modi ka Yaar”, (Modi’s friend). One feels for Bilawal as I genuinely think that he is the right person but at the wrong time.

There is no genuinely liberal political party in Pakistan today and absence of that will further drag us down. Liberals in Pakistan are fighting a losing battle.